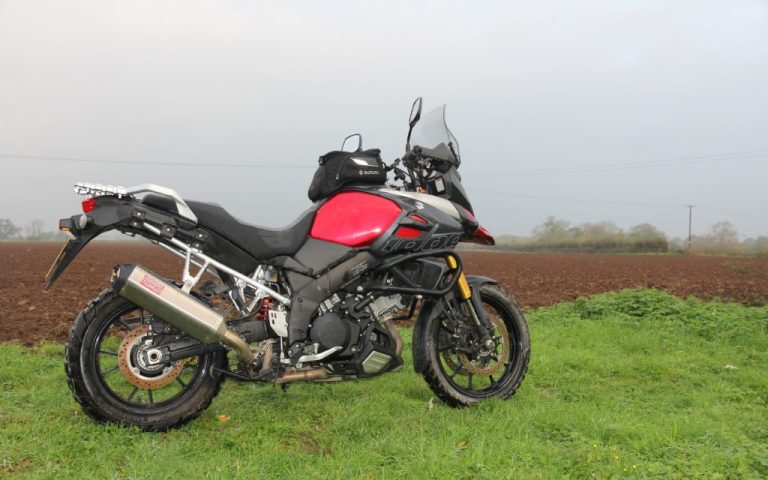 We’ve clocked up just over 8,000 miles on the big Strom now and every time we ride it we discover something new about Suzuki’s 1000cc adventure machine.

It’s been a while since I’ve thrown a leg over the big Strom so I was delighted to get the chance to catch up with the bike over the past couple of months. We’ve had the Suzuki at ABR for over seven months and during that time it’s had a good working over on both tarmac and trails.

My early impression of the bike, whilst still fitted with the road going Bridgestone Battlewings, was that it was a fine on-road machine and going to be more capable in the rough stuff than the company were willing to promote. The lowish seat height meant paddling through mud and over tricky terrain was not so much of a ballet performance as on most 1000cc-plus high-rise adventure bikes. The Strom was also lighter, more compact and manageable and, should the need arise, much easier to pick up off the ground.

The bike now has over 8,000 trouble-free miles on the clock. It’s been decked out with Suzuki’s ‘Adventure Kit’, fitted with an after-market Remus end can and shod in more aggressive off-road compatible Karoo 3s. The ‘kit’ includes crash bars, handguards, plastic sump guard, panniers, high touring screen, centre stand, panniers plus an optional tank bag. All in all, the bike sure looks a lot meaner and capable of heading off into the wilderness than it did when we first picked it up.

A ride down to the Suzuki HQ in Milton Keynes for a 7,500-mile service provided the first opportunity to check out how the mods and farkles affected the bikes manners. There was no doubt the performance benefited from the Titanium Remus can with noticeable extra punch in the mid-range. There was also a more throatier rasp to the Strom, which at first, was universally welcomed.

However, the Remus also outputs a loud drone at around the 70mph mark and after 10 miles on the M40 I’d had enough and found myself adjusting speed in an attempt to tune out the noise. This extra umph in the exhaust note might appeal to some riders but this would drive me nuts on a tour. The Karoo 3s offer a definite improvement over the Battlewings on wet, muddy trails of that there is no doubt.

With the Karoos fitted I’ve yet to find a local Cotswold’s green lane that’s not a blast on the Strom. As it stands I’d feel happy enough taking the bike on some of the tougher trails over in Wales, such as the Sarn Helen, though not at the sort of pace I’d ride a Suzuki DRZ or even a Yamaha 660 Ténéré.

The downside of fitting the Karoo 3s is that on-road performance has been compromised more than I was expecting. At around the 70mph mark the front end of the Strom, which had been very stable on the Battlewings, starts to wander and feel disconcertingly light and twitchy. The effect was enough to have me slowing down to a speed where stability and confidence returned. Would I want this full time on a machine that makes fast riding a pleasure? Probably not.

The Suzuki V-Strom 1000 is proving in every way that it’s a contender in the big bike adventure market. Now that Suzuki have reduced the price and offer incentives to buy it’s getting easier by the day to advise you give one a test ride.