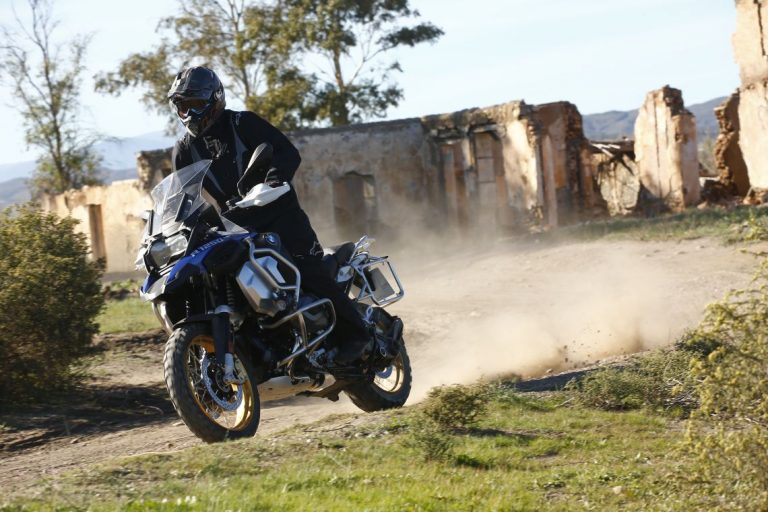 When it was launched way back in 2001, the BMW GS Adventure entered a relatively uncontested and left field marketplace, quickly establishing itself as the ‘go to’ bike for adventure travel on two wheels.

Over the years, as the sector has mushroomed into arguably the most important part of the motorcycle market, the GSA – somewhat assisted by the ‘Long Way Round’ eﬀect – has consistently managed to maintain its position at the top of the tree.

But with the ever-constant release of newer, more sophisticated and more powerful contenders for the BMW’s crown, can the boxer-engined behemoth still remain at the top of the adventure game?

Following on from the release of the all-new R 1250 GS in October, BMW wasted no time in releasing the Adventure version just a few weeks later.

While the UK test of the standard GS had been under the leaden skies of South Wales, BMW elected to show oﬀ the new GSA in the altogether more agreeable setting of Southern Spain.

With mile after mile of beautifully deserted roads and sweeping trails, it’s a region that suited the GS Adventure perfectly.

But would the new bike live up to the heavyweight of expectations?

The moment you hit the button on the keyless ignition, the GSA springs into life with the characteristic little twist of the motor, settling into the familiar thrum of those big pistons trying to punch their way out of the cam covers.

The new engine has had the capacity hiked from 1170 right up to 1254 cc and well into car-sized displacement. BMW could easily have stopped there and simply just tweaked the ECU settings to extract more power from the motor and, given their massive following across the world, the GS and GSA would still have sold in their hundreds of thousands.

But far from sitting on its laurels, by introducing the ShiftCam technology, BMW has raised the bar considerably. And, as we reported in last issue’s review of the stock GS, the eﬀect is just stunning.

While the bike is under partial load and happily skimming along the sun-kissed Spanish roads, the valves only move a small amount, delivering buttery smooth drive and linear power across the rev range right up to around 5000rpm.

But if you want to get a hustle on, twisting that throttle hard will see the camshafts effortlessly slide across to open the valves far wider for far longer.

The change is totally intoxicating, blurring the landscape as the bike heads to the horizon in a massive surge of power.

The new motor now puts out a staggering 9% more power than last year’s 1200 version taking it up to 134 bhp, and an incredible 14% more torque, all delivered in a totally predictable and hugely enjoyable way. This motor is a peach.

With such substantial change in the engine department, the rest of the 2019 GSA has remained largely unchanged, retaining the same steel trellis chassis and suspension as the outgoing model.

If you upgrade to the TE model, then you get the Dynamic ESA suspension package at both ends of the bike, although riding solo and without luggage on the road sections, the stock set-up feels perfectly acceptable.

Away from the blacktop, the GSA takes on the rough stuﬀ with the same expected sure-footedness that has been a hallmark of the GS for nearly two decades. With the addition of that massively powerful motor, rear-wheel steering has never been so enjoyable!

Other inclusions within the Adventure platform include that massive 30-litre tank that should see you stopping for petrol after nearly 400 miles, and of course the ruggedly purposeful protection bars hugging the front end of the bike like a needy metallic spider.

On the electrical side of things, the 2019 GSA gets the same multi-functional 6.5“ TFT screen and LED lights up front, not to forget the Automatic Stability Control and the handy Hill Start Control – a big help on a 268kg bike…

We’ll be featuring a full review of the bike in next month’s edition of ABR, but in the meantime, we can oﬃcially confirm that when it comes to adventure bikes, the BMW R 1250 GS Adventure is still very much the Daddy!