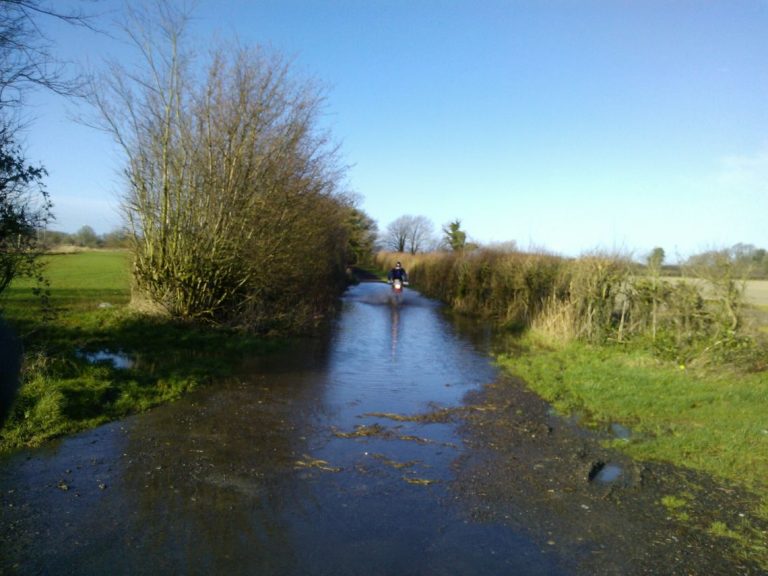 Proving you don’t have to ride to the end of the earth for an adventure, we catch up with Aussie Jim Cairnduff as he rides up the Fosse Way, to visit the dealer he bought the bike from…

Last year in January 2013, when I was purchasing my new Honda CRF250X, my idea had been to green lane it home along the Fosse Way, or as near to it as possible, to Frome. As I was buying the bike from Kestrel Honda in Coventry this was going to be some trip.

The guys in Coventry did their bit, having the bike ready within the three week order period as promised. Unfortunately, after weeks of planning, the persistent poor weather took a turn for the worse and dumped a lot of snow around the Warwick, Stratford-upon-Avon area. As the bike was new and I had no idea of the area or how the bike handled, the green lane idea was scuppered.

All the late nights of planning went out the window and a van was hired for the two and a bit hour haul up to Coventry to collect the bike. The bike had actually arrived a couple of days early and being the first new bike I had purchased in 34 years, the first being in 1979, I was a tad ‘toey’ to pick it up.

My boy, Angus is profoundly special needs, but he is very mobile. It was my week with him so there was nothing for it, he was coming along for the ride. As we neared Coventry he was getting very bored so I knew I was in for some fun.

Walking into the showroom was brilliant as there was my bike taking centre stage among the hundreds of other new bikes. All that shiny new machinery and lighting was just the catalyst Angus needed to run amok.

As Angus banged on the desk screens (making a fantastic booming sound) and grabbed at the handlebars all I could see were pound signs, my pounds, as I paid off expensive breakages! Thankfully, that didn’t happen and after we had signed the documents we got Angus and the bike back in the van for the trip home.

It didn’t seem to faze the sales staff, but I breathed a huge sigh of relief and I promised I would return next year on the anniversary.

Although in the back of my mind, I had retained the thought, it was Mike Beddows’ green laning article about the Fosse Way in ABR 18 and 19 that put the thought right back on the agenda. I was going to do this, but this time the planning would be in reverse, from Frome to Coventry.

Leading up to the Saturday 1st February 2014 departure date the bike was prepped; clean air filter, oil change, (engine and gearbox) some new handgrips and protectors, and a clean.

All my gear was sprayed with some water repellant in the lounge, a really daft idea as the stuff smells like hell for at least four hours and was not the most endearing thing I have done around the missus!

I had planned to roll out the drive at 7 a.m., but it was still dark so actually left at 7:30. It was bloody freezing, but I had plenty of layers on so did not have real problems with the cold.

My first trail was to be the legendary Pipehouse Lane, running out of Midford between the B3110 up a pretty decent hill exiting up on the A36 a good mile later.

It was already known to me that the B3110 was closed due to a huge landslip of some 100 tonnes, with it this that I wanted a look at. What I didn’t know was that the slip was directly at the bottom of Pipehouse Lane itself!

On arrival at the lane, I was greeted by six-foot plastic roadblock sections. Stepping off to take a look at the lane entrance I could see some really big pieces of Cotswold stone at the entrance. I am no extreme rider so moved aside some of the bigger ones, backed up the bike as far as I could, dropped the clutch and just launched over the remaining pile and typically the Honda just sailed across. It’s always far better than my actual thought process allows for.

But why do councils insist on fixing byways that are virtual gutters and especially one as steep as Pipehouse? Thousands and thousands of pounds and just as many tonnes of stone have been wasted trying to sort it out.

Two small paths were left to either side of the rivulet that had reappeared after the first torrential rain and it was approximately four foot deep. I thought to myself just don’t go in the rut, and promptly I did!

I’m sure there are brave souls who would ride this lane alone without a thought, but I was starting to think I was pretty foolhardy and if I’m honest, frightened. After a couple of stops and restarts, the top was reached and I was wondering what the fuss was about. It was a great adrenaline rush to start the trip on.

My next lane was not until Shockerwick, on the north side of Bath, which entailed crossing the toll bridge at Batheaston, with it always worth a stop here and a look at the river. There are good pubs on both sides of the river too.

The lane, although short, was particularly beautiful with views back to Bath and a nice tricky rock section nearer the top, leading onto the Fosse Way proper.

At this point, I was travelling along lanes already covered in previous issues of the magazine, but I did come across a significant snag; the railway bridge near Sherston was being rebuilt and the Fosse was closed!

This was a blessing in disguise, however, as the bridge builders turned up at the same time as I, and were about to put the kettle on. Cold hands, warm cuppa, I couldn’t think of anything better!

One hundred yards on the other side of the bridge I could see a byway that ran off the Fosse.

After the OS was consulted a diversion was organized, some four miles to do one hundred yards, but it was really worth it!

There is a lovely s-bend back closer to the bridge, which allowed for some nice controlled drifting and then a long water trap that proved to be only about a foot deep at the most.

I continued on the Fosse proper to the Cotswold airport where I veered off towards Rodmartin (where?), but that’s another story, for another time…