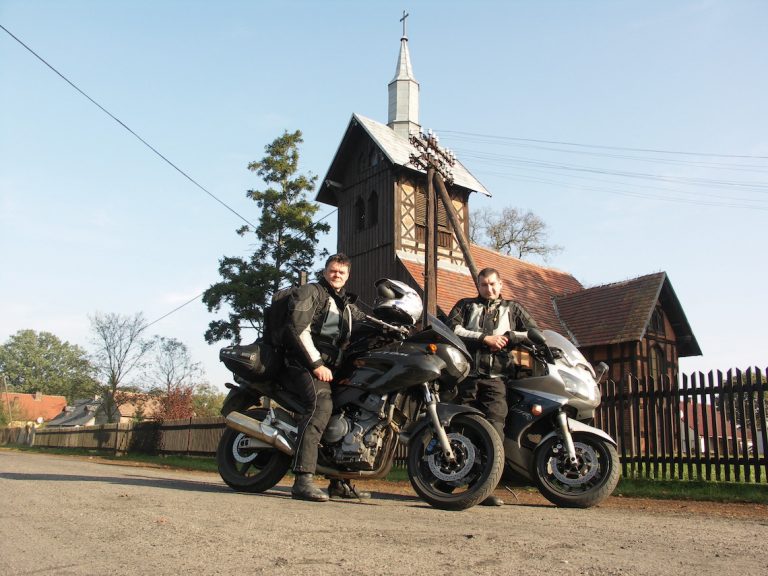 Discontent with office jockey life, ex-marines Graham Hoskins and Andrew Summers decided to shake things up with an ABR-ing challenge: Moscow and back in seven days. This is how they got on…

Graham Hoskins: Lover of all things two- wheeled and occasional adventurer with more aspiration than activation. He’s a motivational speaker, wannabe TV documentary maker… oh, and not forgetting the day job – management consultant, father of three and husband to one very understanding Mrs H!
Andrew Summers: Used to get paid to ride bikes really fast and carry a sidearm. Now his weapon of choice is an iPad and he rides a GS1150. In addition to scouring Europe by bike, he’s seen some some far-flung places, too. Loves making ABR-ing videos for his son to watch.

After a particularly frustrating day at work, I phoned my best mate to tell him that we’d both become a couple of office jockeys, underserving of the high regard in which we usually held ourselves. We were no longer the rough and tough, ready for action ex- marines that had blagged motorcycles for trips when we couldn’t afford to buy them. We were soft, about as adventurous as butterscotch blancmange and utterly letting the side down. Once he had got over the verbal battering, he actually agreed with me and we set about putting matters right.

Our brief was simple: what could we do that would be challenging, adventurous, take us into the unknown, start from the UK and cost us as little as possible? A bit of the old marines’ spirit started to raise its green-lidded head as we thought about attempting an endurance ride. We couldn’t agree on a destination though. In the end, the answer just appeared when Andrew announced, “I’ve got it. Moscow.” And there it was. I did a quick check on route-planner site www.viamichelin.com, which reported back a ride of 2,000 miles each way. Could we do 4,000 miles in a week? Hell, yes!

The fun bit was then planning how to get there. We considered going through Belarus, which cuts about 100 miles off the journey, but involves more visas and two difficult borders. Going via Poland, Lithuania and Latvia meant we’d stay in Europe and would make life just a little easier for insurance and border crossing-purposes. We finally settled on the route:

…and back! A trifling 1,891 miles each way. Our thinking was that the first full day should be a lot longer as we could get across Germany at a sprinter’s pace, following the mighty Autobahns, helped by the equally mighty German drivers. Poland onwards would be fairly bereft of motorways so we gave ourselves far fewer miles. The day of the Russian border crossing was given the lowest mileage target as we’d been advised that it could take up to six hours to get across.

I had the task of finding bikes for the challenge, as we thought our respective Fireblade and VTR SP1 might lack a little in the long-distance comfort department (Nick Sanders we ain’t). I got summarily blanked by most of the bike manufacturers but hit the jackpot with the wonderfully helpful Harley Stephens who was in charge of Yamaha’s UK PR at the time and more importantly, its test fleet. There must have been something in what I said that caught his imagination, because he agreed to lend us Yamaha’s test fleet FJR1300 and TDM900.

All too quickly it was 15 October and we were outside the Ace Café on a warm but quickly darkening late afternoon. We stopped in central London for a few ‘Leicester-Square-to-Red-Square’ photos, blasted down to Dover and caught a Eurotunnel train to Calais, which was when the nerves began to set in.

Saturday morning only reinforced my nervousness. As we stood outside the hotel at 06.15am ready to depart, the fog was so dense we could hardly see each other. What a way to start with just 724 miles to go! I’d also forgotten my driving glasses and could barely read the road signs. Despite my misgivings, the first couple of hours went fairly quickly. Clearing France and Belgium, the weather suddenly brightened up, along with my outlook, and we were in Germany.

What can anyone say about riding the Autobahns? Keep your wits about you! Even doing a steady 100mph Audis, Beemers and Mercs still flew past us at 130-plus making us feel like slow Auntie Nel. And Woe betide you if you forget to check your mirrors regularly. Having said that, I never feel safer than when I’m riding on the road in Germany. They know how to handle their speed like they know how to handle their economy.

Almost 12 hours of Western European tarmac had ill prepared us for what lay in store on the other side of the Polish border. Metres after we left the no-man’s land between Germany and Poland, the ironing-board of a motorway became a motorcycling nightmare. I wasn’t of the off-roading persuasion at the time and the Polish roads were sporting the worst kind of lorry damage. Ruts, at least four inches deep, carved up the road in our direction of travel. Close to perpendicular and still coated with grippy tarmac, these ruts threw the bike to up in the air each time a tyre kissed an edge. It felt like the FJR had become a jet-ski flying over choppy waves and I was genuinely terrified. Of course, we could have slowed down but we still had 200 miles to go and a foreign city hotel to find. By the time we finally rolled into bed at midnight we’d covered 900 miles in 17 hours and were pooped.

The next day’s ride took us past historical concentration camp sites, through the centre of Warsaw and north towards Lithuania. The Iron Curtain had left this countryside curiously unspoilt by six-lane rivers of tarmac and once we’d got used to the rutted roads, we rather enjoyed ourselves.

Later that evening we were riding through the Lithuanian countryside in the dark. I was leading. Our destination was Daugavpils, 20 miles over the border into Latvia. Passing through a tiny village, I noticed the speckles of light coming from the houses, and as we left the village over a crossroads I clocked a chap in uniform who I assumed was a local copper. A minute or two later, Andrew accelerated past me and continued going faster. Then he was on the intercom.

“Can you see anything behind us?” he said.
I could not.
A minute later, “Is it still clear? There’s no one following us?”
His voice had just a hint of panic in it, which worried me. Usually, nothing phases Andrew.
“What’s the panic?” I said over the intercom.
“The cops!”
“What about them?”
“You nearly took them out!”
“Huh?”
“You knob! That copper was standing right in the middle of the road waving a great big fuck-off red stop sign and not only did you not stop, you missed him by a fag paper, then bullied him off the road. That’s who I’m trying to get away from!”
Driving glasses. Who needs them?

My two greatest fears of the whole challenge were crossing the Russian border and avoiding money-grabbing Russian coppers. My mindset was worsened by the tiredness beginning to set in. Neither of us was eating or drinking properly, or wearing our earplugs, and on this type of challenge you’ve really got to take those things seriously.

We’d been led to believe that the Russian border was going to be a complex red-tape affair, but luckily our preparations paid off and we were through in a mere three and a half hours. One very attentive border guard did spot Andrew’s helmet camera and made him rewind and record over the border footage. With the benefit of hindsight and having endured far worse experiences in North Africa recently, we got off quite lightly.

We were also warned that keeping to the speed limit in Russia is advisable under all circumstances. Russian rozzers are apparently well known for lightening a rider’s wallet at the slightest provocation, and lonely weeks spent patrolling deserted forest roads can sharpen their ‘tastes’, so for the first 30 miles of our journey into Russia, we stuck religiously to the advertised speed limit.

We soon noticed, however, that local traffic was doing a good 20 or even 30 miles more than us. We realised that if we stuck to the speed limit, it would be nine or 10 hours to reach Moscow and it was already early afternoon. Ever the pragmatists, we decided to tail the faster cars and see what happened.

These local guys weren’t daft. Whenever they approached a junction, a village, gas station or indeed anywhere that might be hiding a copper, they slowed right down then sped up afterwards. The oncoming traffic was also very helpful – flashing its lights whenever a copper was behind them. We followed the local’s lead and began to make progress.

Six or seven hours of body numbing vibrations from the dodgy road surface brought us close to central Moscow. Or so we thought. Another act of inadequate preparation meant we only had a tourist street map of Moscow. Two major problems: one, it was in English and all the road signs were in Cyrillic; two, it only covered the centre of Moscow and a friendly gas station attendant helped us work out that we were on the outer ring road, still a good 15 miles from the hotel. It was like being on the M25, trying to find your way to Oxford Street following road signs written in Wookie.

Luckily Andrew had looked up the Cyrillic alphabet before we left and could recognise the word for ‘centre’. We still ended up using a taxi to show us the way for the last couple of miles – that was a mad ride. Through Moscow city centre, in the dark, bouncing across busy tram lines, creating our own mini Gumball Rally. Our arrival time was about 10pm. Departure time was 7am, ready for a flying visit to Red Square then back on the road, following the reverse route home.

We had completed almost 2,000 miles of riding in three days for a nine- hour stop in Moscow. It sounds mad when you say it like that, which, of course, it was.

Ride and bear it

In undertaking their Moscow endurance challenge, Graham and Andrew succeeded in raising a staggering £5,000 for Children in Need, which helps to improve the lives of disadvantaged children across the UK. To find out how you can raise funds for the charity, or to donate, see www.bbc.co.uk/pudsey

Unexpectedly, we both preferred riding the TDM over the FJR, particularly after Germany, where it was simply more fun. It was the colder one of the two though as it was un-faired. Both machines proved very reliable, even though we popped the odd litre of leaded fuel in by mistake. After we’d returned the bikes to Yamaha, one of the technicians told me that the FJR radiator was so peppered with holes from the chippings on the Russian forest road that he was surprised we made it back!