Riding in Pyrenees: A Pyrenean Pootle 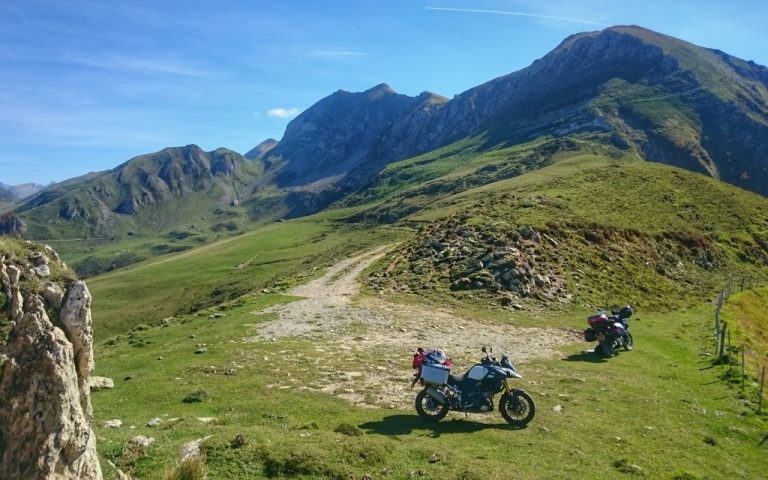 Can you go touring without a plan? Of course you can, as Dick Whitehouse finds out on his trip through the Pyrenees.

Glancing around at the riders and pillions of the other 148 bikes waiting to disgorge from the Brittany Ferries Pont Aven out into Santander, it struck me they all had some idea where they were going; no doubt plans had been formed over many months of anticipation and were now being tapped into life on the keyboards of SatNavs all around us. I’d asked the lady at the info desk how many bikes were on board; I’m sad but not sad enough to have counted them all.

Ian and I are wild-camping hammockers, canoeists, trail riders and bikers with understanding wives who weren’t in the slightest bit bothered that we hadn’t booked a ferry back or told them where we were going apart from a vague Spain then France.

And so it was, with nothing more specific than ‘let’s keep the SatNav showing south or south-east’, that we set off into a slightly murkier Spain than we had hoped for… The plains of Spain were OK, but the mountains of the Montaña Oriental range were simultaneously impressive and damp.

Within an hour or so of leaving the ferry, we were in that special corner of biker heaven known as no other bugger anywhere near you.

At Espinosa de los Monteros we came across some public woodland/amenity space alongside a pleasant river about a mile from the nearest housing – in the absence of any ‘No Camping’ signs or anybody to gainsay us, and after some mild trail riding we were soon hammocked up with beers in mitts – a deer wandered through our little glade and you could hear wild boar snuffling about later in the evening. A great start to the trip.

The local police popped in to say hello in the morning and were delighted to see we had not had a fire, had left no litter and were only spending one night there – I’m not sure if this is the rule everywhere but it was smiles all round.

Some bumbling about for a couple of days brought us to the Pyrenees themselves and another, rather unconventional, sleeping situation. Not far from Roncesvalles we chanced upon a sign for the NA2033, not on the main road but off a car park; it wasn’t entirely clear from our maps or Google Earth that it went into France, but it was in roughly the right direction, so we gave it a run.

With a surface made of equal amounts of tarmac, gravel, holes and horse manure it was an interesting ascent via several hairpins to a T-junction of gravelled roads.

A couple of French guys in a battered old Renault assured us that we could get to France; they knew people who had ridden it, or claimed to anyway.

We were high up, but the forecast was settled, and it seemed like there was an adventure to be had – a couple of descents had us dipping into the old reality-check pocket and asking if we’d get back up the loose surface which had long before turned into a tarmac free zone.

It’s not often in our travels we’ve come across a mountain refuge with signs in multiple languages inviting travellers to stop the night rather than die in adverse weather conditions; stopping to ponder the wisdom or otherwise of carrying on we chanced upon some German walkers who were also bikers; glancing at 244kg of Varadero, 100kg of me and 50kg of gear, they suggested that some sort of helicopter attachment was needed for a few sections along with a marine option for the boggy bits.

Now, I dare say that a couple of high-end manufacturers do offer those optional extras, but my 12-year-old Varadero was lucky to come with heated grips. We had beer and we had food, so we stopped the night in one of the most amazing places I’ve stayed at in Europe and dozed off only worried slightly about the traction getting back up tomorrow… No, the Varadero doesn’t have traction control either!

The Refugio Izandorre lies on the Camino de Santiago – a popular pilgrim route.

They do say that these sorts of trips are as much about the people you meet as the scenery and the machines; thinking we had the place to ourselves, we were settling down for the night when two waifs turned up in the darkness.

These two teenage German lads had walked for 90 days from Berlin and had another 70 ahead of them to complete the pilgrimage route to the far west of Spain, spread out their meagre belongings on the concrete floor of the refuge while we made it plain that age, size and possession were the criteria for us keeping the only two sleeping platforms!

Allowing themselves just five euros a day between them, they had been foraging to make ends meet; with full bellies and a glass of single malt each we looked on in amusement as they cooked themselves a meal of the finest horse chestnuts believing them to be edible.

We tried to tell them, but they insisted that they had been told they were OK to eat – probably by the two French guys in the Renault who reckoned we could get to France on this track.

The only trouble with these lads was that they had the same relationship to personal hygiene and deodorant as I enjoy with Brigitte Bardot and Gina Lollobrigida (younger, more current models are available, or not).

Despite spending a night in close proximity to these two and waking regularly to consider whether a badger’s bottom would have smelled nicer, we donated some spare, non-poisonous, fresh food and a small amount of cash before we left in the morning.

We walked up the ascents first in the morning, kicking aside anything that would slow us to a halt – traction and momentum were my new favourite words – but all went well and so we turned our thoughts to a proper Pyrenean crossing but not a popular or busy one, oh no!

The NA2011, the Pass de Larrau, call it what you will but we had it to ourselves, not seeing another vehicle for two hours, heavenly! Descending into France we suddenly developed acute wanderlust and a conversation took place along the lines of ‘let’s sling the next right and see what’s what’.

Well, ‘what’s what’ turned out to be a very pleasant mountain road with a warm sunny grassy bank to contemplate the world and have lunch on – the views were OK.

I guess it’s like booze to an alcoholic but dangle an unpaved track in front of us and we drool and lose all sense of acting our ages rather than shoe sizes.

Well, after a four-mile trail ride we ended up at the dead-end known as the Crete de Buruchieta. We briefly considered stopping the night at the Crete but then realised our foolhardiness after the beer count stopped at zero.

Another couple of days bimbled by in an unhurried and, despite two SatNavs and several maps, often lost fashion; we even managed to stop two nights at a friend’s place near Montcuq where I was reunited with my beloved 23-year-old TTR250 which lives out there in peaceful retirement without TROs and NIMBYs to darken its days.

Joking aside, this is trail riding nirvana with hundreds of miles of routes of all difficulties, hidden MX tracks and smiling, welcoming locals… Oh, and sunshine!

Feeling a tad chilly as we rode north, we chanced upon a delightful cafe in a small village; a coffee and a bun was in my mind’s eye.

After coffee appeared, Ian decided he wanted cheese on toast – as you do in deepest France.

After failing to persuade the lovely waitress about Welsh Rarebit he went into full-on charades mode to describe a menu and, with much shivering and arm wrapping, much froid and chaud, even a jambon was uttered.

As I went out to the bike I left him with the warning that a menu du jour was a multi-course set banquet and I wasn’t that hungry.

Upon my return he assured me he had successfully ordered something; he wasn’t sure what, but he said the waitress seemed to understand him. A couple of hours later after the fifth course, none of them cheese, ham or toast based, had been forced down, we retreated to the gastronomic safety of the bikes… A complete Croque Monsieur I guess.

Well that’s about it folks, a few days in the lives of a couple of old codgers who were to catch the return ferry at Caen three days later with only one good leg each due to an inability to either steer or land their trail bikes

A Hammock: Will it suit you, Sir?

I leave you with the ultimate in cheeky hammocking somewhere in mid-France, but I assure you that the villagers did give us permission to use their trees and the perimeter rails of the football pitch; they even popped out after dark to make sure Les Anglais were comfortable… Merci, nous avons assez de bière (thank you, we have enough beer)!

Forget the cartoon images of people spinning round in hammocks, they are quite stable and surprisingly comfortable. I started using them in nice warm Mediterranean climates twenty years ago and graduated to using them on biking trips to arctic Norway.

It’s probably no harder in most places to find two trees about 12’ apart than it is to find a space for a tent that is dry, flat and free of sharp bits.

In fairness, if you demand a shower block then you probably won’t find a campsite with the requisite trees but if, like us, you don’t mind going wild occasionally and washing in a river, then maybe hammocking is worth a try.

Some hammocks, such as those made by Hennessy, pitch the tarp and the hammock on one line making them very quick to pitch and light in weight. 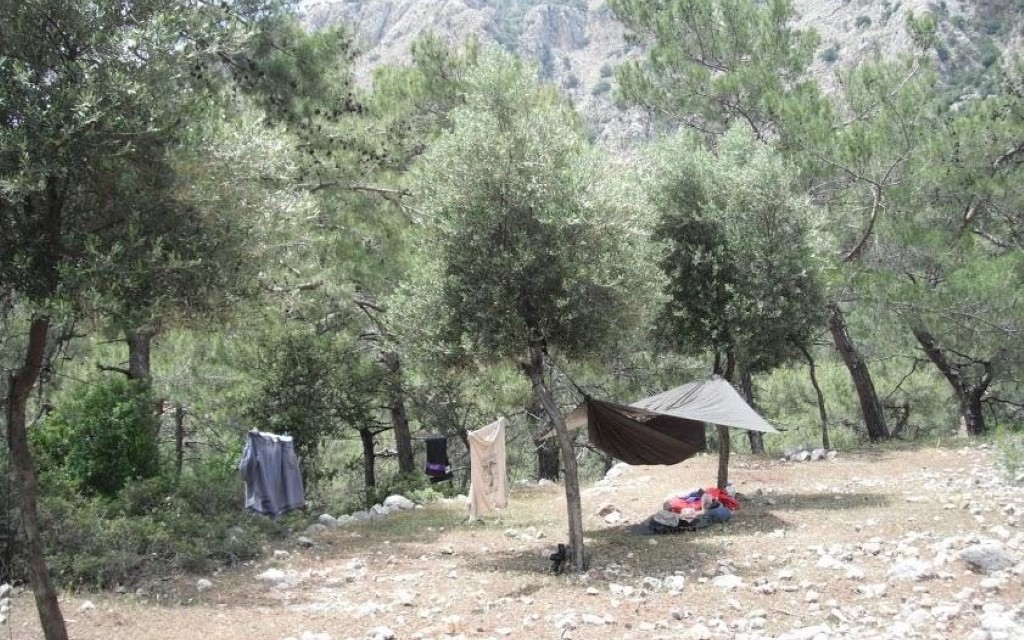 I prefer the flexibility of a two-line system such as those by DD Hammocks – the tarp can be quickly strung up on its own to make a sun/rain shelter on a quick lunch stop and there is room to work on a bike under them too.

No trees, no problem… With a bit of imagination, the tarp can be strung from the bars/frames of a couple of bikes to make a sloping shelter. If you like to cover all bases, then the DD Travel Hammock has a waterproof base and can be pitched as a tent.

They all come with midge nets and don’t forget that the cold will come up from the ground during the night, so you will need insulation – either in the form of an under blanket (recommended) or a more traditional inflatable camping mat, but good luck staying on that all night!

Finally, there is as much discussion/argument over every aspect of hammocking and wild-camping as there is between aficionados of rival bike marques; for what it’s worth, my advice is to just get out and do it and if someone objects simply smile… A lot! No trip is complete without the odd misunderstanding.