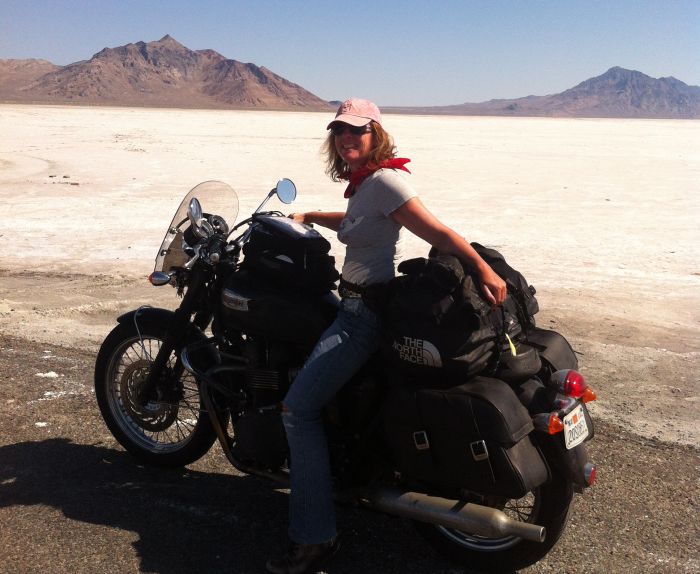 AGE: Old enough to know what I shouldn’t do but young enough to do it anyway!

FIRST BIKE? Scooter Peugeot 50cc which I bought in Paris when they first started making them again back in the 80s.

DREAM BIKE? What I already have! Yes the Bonneville is great for distance travelling.

FERRY OR TUNNEL? Ferry – met a great crew of French café racer bikers on the first trip over who helped me tie the bike down! Plus you get more of a chance to have a good natter.

MOST EXPENSIVE MOTORCYCLE ACCESSORY EVER BOUGHT? Pure leather handmade saddlebags shipped over from the USA by Fox Creek – a little place in the middle of the Blue Ridge Mountains.

LIFELONG AMBITION? Not to have to worry about money and hit the road with no time frame visiting the best coastline places along the America’s coastline (USA and Latin America). 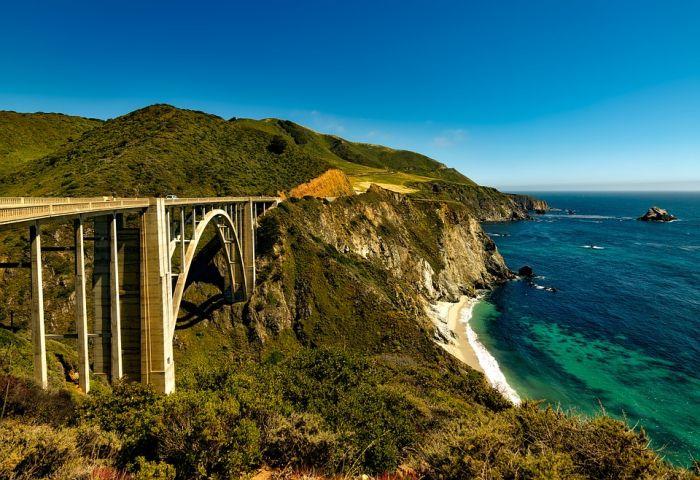 IDEAL TRAVEL PARTNER? Steve McQueen to get me out of problems, fixing and repairing bikes, lots of stories over the campfire and looking cool at the same time.

MOST DANGEROUS MOMENT? Travelling during a storm front from New York down the east coast to Wilmington, Delaware on Route 95 – first solo trip, not properly attired (nowhere to stop) and the trucks were dangerously spewing up water, soaking me in the process. I was scared to death that I was going to be knocked over or get out of control!

MOST MEMORABLE MOMENT? Has to be during my solo east to west trip across the USA during the hottest summer in history of 2012. Through the mid-west from Santa Fe, New Mexico, through Utah up to the Bonneville Salt Flats and through the Nevada desert and up through the Tioga Pass where I’d ride for days without seeing a single other piece of traffic – the quietness and tranquillity were priceless. Coming back from this eight week solo trip ultimately pushed me to write ‘Bonneville Go or Bust – on the roads less travelled’.

WHAT DO YOU MISS MOST WHEN TRAVELLING? Nothing much – as you can get most things on the road – maybe sometimes though that marmite toasted sandwich!

PERSON YOU WOULD MOST LIKE TO MEET AND THE QUESTION YOU WOULD MOST LIKE TO ASK THEM? I’d like to have met Theresa Wallach – a true icon – Born in 1909, she became a true motorcycle pioneer when, in 1935, she and her friend on a 600cc Panther equipped with a sidecar and trailer set out from London to Cape Town without even a compass. Throughout her life she was the epitome of pioneering exploration and adventure which included being a racer, military dispatch rider, engineer and author. Just after the war, she fulfilled a lifelong dream of touring America on a motorcycle which lasted for two and a half years. My question would be ‘what was the highlight of your trip across America and will you ever want to stop exploring?’

FAVORITE CRAP JOKE? Did you hear about the thief who fell and broke his leg in wet cement? He became a hardened criminal.

WRITE A 50-WORD PERSONAL AD FOR YOU AND YOUR BIKE AS IF YOU WERE BOTH GOING TO JOIN AN ADVENTURE BIKE RIDING DATING SITE:
2 sexy British numbers; a girl and her Bonnie T100. Smooth and classy  – likes cool retro attire, looking for funky adventurer to join and be her road dog on the ‘roads less travelled’. Only dudes with SOH and full tool kit need apply.

If you want to be a reader exposed in a future issue of Adventure Bike Rider, email [email protected] and if we feature you you’ll get a free year’s subscription to the mag. You can’t say fairer than that, eh?