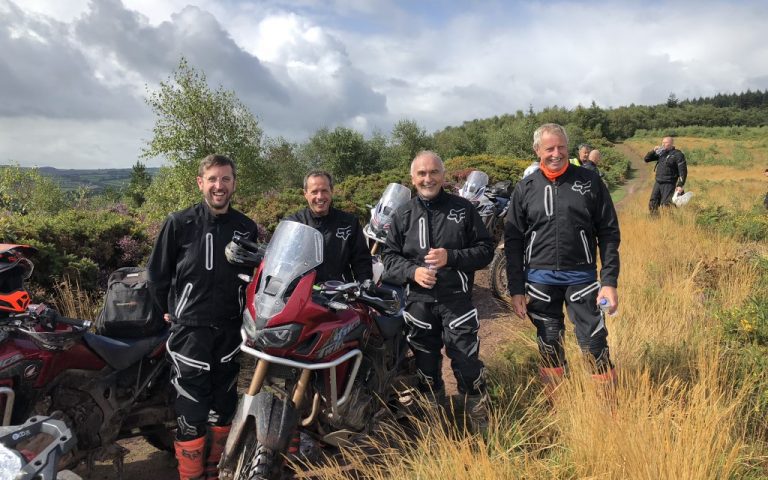 Growing up, my two brothers and I had various motorcycles which were kept at our Grandma’s farm in Yorkshire: a lovely little Honda XR80, another old Honda 125 trials type of bike, a Yamaha DT60 and a little Honda 90. We were regulars at the local motorbike mechanic’s/breaker’s yard!

Whenever we were visiting Grandma, we’d spend all weekend riding our bikes across the fields, up and down the local lanes and sometimes along the disused railway line… That is after we’d spent most of the morning trying to get them all started up!

Memories of me as a young boy driving a Land Rover down the lane and towing my Dad behind whilst he was trying to bump start a motorbike will never leave me. Happy days indeed!

Another memory I’ll never forget is watching my youngest brother riding our Honda XR80… He must have been about six at the time and couldn’t reach the floor yet, so we’d sit him on the bike and run with it until he was going.

When he was ready to stop, he’d wave his arm and we would get ready to catch him as he came to a standstill. This was a great plan until one day he was riding around the field and the bike started to pop and splutter… Dad said, “Uh oh, I think that bike is about to run out of petrol, this will be interesting”.

The bike came to a stop at the other end of the field and all we could do was watch as my little brother gently toppled off sideways and landed in a heap on the ground!

He’s 33 now and has owned a Honda CBR 600, MotoGuzzi V7 Special, KTM 990 Adventure, and currently rides a Honda Africa Twin (he’s also a lot taller so has no problems touching the floor now!).

About 10 years ago, he got the adventure bug and rode around the north coast of Scotland on his CBR 600. Dad, who rides a 1989 Honda VFR 750, soon got ‘FOMO’ (Fear of Missing Out) and wanted to be in on the next trip.

My Dad’s best friend (who happens to be my godfather and has a BMW F800 GT) is also into bikes so the three of them started planning their next adventure. This became an annual trip and, would you believe it, I too developed ‘FOMO’ – especially as my godfather’s youngest son also had a motorbike and he was now talking about joining them. Something had to be done.

In the summer of 2017 Dad showed me an article in Bike about BMW’s ‘Rookie to Rider’ scheme. It sounded brilliant, so after discussing with my wife I decided to sign up and duly started revising for my theory test! I was 38 at the time.

However, on 10 November 2017 we received the truly heart-breaking news that my godfather’s youngest son had been killed in a road traffic accident whilst riding his motorbike home from work that evening. He was only 30. Our families were absolutely devastated, and I put everything on hold with doing my motorbike tests.

After the funeral, a conversation came to mind that I had with my godfather’s son at his 30th birthday party earlier that year where we both talked about joining our Dads and my brother on their annual motorbike trips.

I remember his infectious enthusiasm for bikes and him encouraging me to learn to ride again, so I made the decision to carry on with doing my licence, to honour our dreams. I believe he would have wanted me to do this. I took my theory test in January 2018, passed, and booked myself on the first available BMW Rookie to Rider scheme starting later that month.

I passed with flying colours and ordered my first motorbike, a BMW F850 GS Sport. My brother was now very much into adventure bikes, and riding an Africa Twin, so the new GS was perfect!

I absolutely love going out on my bike. The feeling of freedom is unbelievable, and I often think of my godfather’s son whilst I’m out riding. Since passing my test, the four of us (Dad, my godfather, my brother and I) have been on a two-day off-roading experience at the Honda Adventure Centre in Exmoor, where we rode the awesome Africa Twins.

As a new rider I gained so much confidence from this! Our instructors (Pat and Flash) were brilliant and really helped me improve with slow speed riding, off-road skills and bike control. To say I’m now obsessed with motorbike adventures is an understatement. Our next trip is in the planning stages and West Coast of Scotland seems to be favourite.

After gaining my licence, my brother gave me his copy of Adventure Bike Rider magazine with the comment “you will absolutely love this” – and he wasn’t wrong! ABR is such an informative and inspirational magazine, and I often find myself reading the same articles more than once!

I’m constantly messaging my brother with motorcycle destinations from ABR that we must put on the list, and I always look forward to seeing him so we can talk bikes, especially as I know he’ll be passing on his latest copy of ABR for me to read!

Learning to ride a bike has been an emotional experience, but it’s also made me re-assess how I look at things. Life is too short, so get out there and ride your motorbike as much as you can. Plan that next motorcycle adventure without delay!

To everyone at ABR: please keep up the good work! I absolutely love reading your magazine and my passion for adventure riding is growing with every new issue of ABR.

Well, over the past few years I have changed my riding from road to adventure and have done a couple of things like the GS Trophy qualifier in 2017, and the Taffy Dakar in 2018. I have also done the BMW Off-Road Skills training in Wales, but in a moment of madness I have signed up to do the Gibraltar Race in June 2019.

After contemplating doing it on my 2014 GSA, I have been reading your articles on the XT660 Ténéré and have gone and got one of them to do it on. It’s a 2008 model, so not new, but, as I thought to myself, it is a bit lighter and not so expensive if I do have a big off. So, I have been doing a bit of work on the bike and am now going to start to train a bit ready for the race.

I run Loughborough School of Motorcycling, which I opened in 2016, and am in a lucky position to be able to do this and also hopefully inspire some people to get out there and try and push themselves.

I love your magazine! Here’s a pic of me riding a hired R 1200 GS, heading south on the Prince Alfred Highway (gravel) towards Knysna in South Africa in November. My partner and I joined six others from around the world on the Odyssey Tour organised and led by Jo Rust Adventures – an incredible 2,000-mile ride from Johannesburg to Cape Town via the Sani Pass – unforgettable.

Keep up the good work! I’m looking forward to seeing the next Coast to Coast routes, I’m planning to do the Scotland one ASAP. Thanks for the gpx. details, it really helps.