Photography: Getting the hero shot 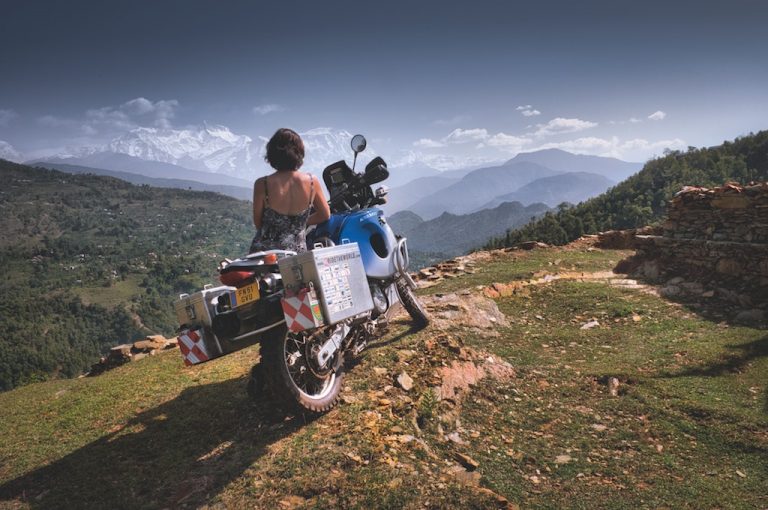 Do you want to capture epic images of you and your bike like the ones you see in the pages of ABR? Simon Thomas explains how to do just that.

Have you ever tried to photograph yourself and your bike to get an epic hero shot, but been less than inspired by the result? Yeah, me too. Some years ago, I was talking with a professional motorcycle photographer about why I liked his images better than mine, even though our bikes were in the same location and stood side by side. His shots somehow looked better and more powerful than those I took.

Later that day, we sat down and we analysed what he was doing right that I wasn’t. That conversation changed how I photograph my wife Lisa, myself, and our bikes, and that’s what I what to share with you today. Let’s get stuck in.

Draw in the viewer

The photo I’ve chosen to illustrate the techniques I’m going to share is of Lisa and her BMW F 650 GS in Nepal, north of Pokhara. I took the photo but Lisa could easily have set up the shot herself using a tripod and timer on the camera if she was alone. You can still get epic shots of you and your bike if you’re travelling solo.

At first glance, it’s a simple enough photo. She’s probably leant on her bike to take in the view and I snapped a quick photo, right? Not quite. The first technique to use when taking a successful hero shot is to create a composition that inspires the viewer to actually want to imagine themselves as the person in the photograph. The second technique is to make sure that you have a focal point in your image that the viewer would want to ride towards. Basically, you are trying to create an image that effortlessly draws the viewer in and captures their imagination.

In this image, we can all imagine ourselves jumping on that bike and riding into the Himalayan mountains on the horizon. As the viewer, we tend to look in the same direction as the person in the photo, so make sure you’re looking at something interesting. If Lisa was staring off to the left, we’d all be wondering what she’s looking at and why can’t we see it.

Another key aspect to think about is how to make the bike look its best. One of the tips I picked up from my professional photographer friend is that, if you’re shooting your bike from the back, then try to raise the front of it higher than the rear. The slope in the shot made this easy.

Lisa’s F 650 GS looks well-proportioned and powerful because the fuel tank, bars, and screen can be easily seen and all rise above the panniers on the rear. If the bike had been flat, the view would have been great, but all we’d see of Lisa’s bike is two bloody big metal boxes.

If you’re going to stand near your bike rather than being sat on it, then make sure you stand close so that you and the bike appear visually connected. If you stand too far away, things start to feel disconnected and you can end up being a distraction in the shot, rather than the hero of it.

The next tip is a crucial one, so be sure to follow it. Make sure you’re stood on the left side of your bike, which is the way a motorcycle leans when it is on its side stand. For that matter, always try to photograph the bike from the opposite side to which it is leaning. You can see the photo in this article is shot from the rear right, so the motorcycle is leaning away from the camera.

We also made sure that Lisa was stood to the left of her bike because it meant that she was also stood downhill from it. Lisa is only 5’ 2” tall, but standing downhill means that proportionately her bike looks even larger. It may sound silly, but no one wants their bike to look small or weak.

Make sure you turn the bike handlebars in towards the lean direction of the bike, which will generally always be to the left, because of the side stand. Again, turning the bars the other way typically just looks awkward.

If you’re going to be sitting on the bike, make sure your hands are on the bars. I’ve seen hundreds of shots with the riders sat on their bikes with their hands in the laps, on their hips, or elsewhere, and it just looks weird.

Think about the angle you’re shooting from and try to shoot from tank bag height or below. By shooting at a level or upward angle, the bike’s proportions and symmetry will always look exaggerated and appear slightly more dominant in the shot. Look carefully at the shot of Lisa and her bike. The camera is actually sitting about handlebar height. This minimises how much of the top of the panniers can be seen and places more visual emphasis on those massive fuel tanks.

Lastly, make sure you give yourself and your bike some space in the photo. Don’t cram yourself at the bottom of the composition or down in a corner. In this image, Lisa is just below the centre and we can easily see her rear wheel, the view ahead, and all around her. If needs be, we can always crop into the shot later.

Remember, have fun, experiment, and practice. You’ll get some cracking results. If you get a moment share your favourite images with us at facebook.com/2ridetheworld.