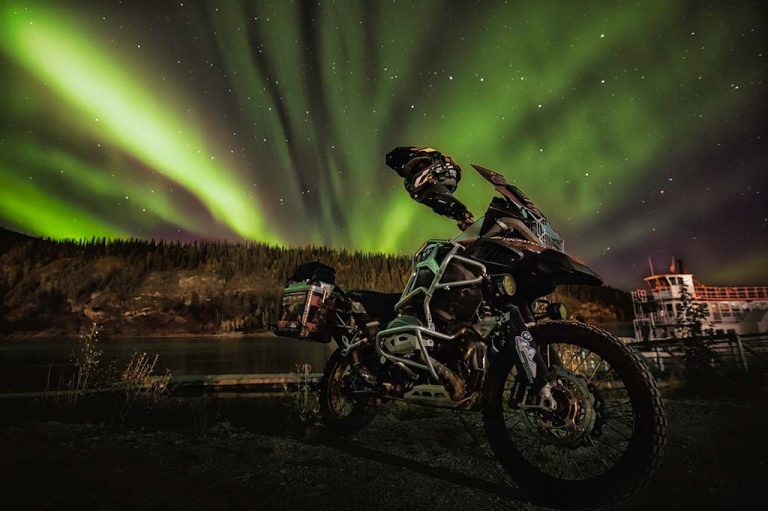 Getting the perfect shot isn’t about luck, it’s about putting in the time and effort to make the circumstances right

Gary Player, the famous golfer, made the observation, “The harder I work, the luckier I get!”

Over the years we’ve heard this a thousand times, “What a shot, you’re so lucky”. Most of the time we just bite our tongues, nod in agreement, and accept the compliment, even though the truth of the matter is that the shot was captured because of hard work and effort, as opposed to dumb luck.

This shot of my R1200GSA LC under the Aurora Borealis is a great example of planning and effort paying off. Since I was a kid, I’ve wanted to see the Aurora Borealis, or Northern Lights as they’re commonly known. Looking up at the sky at 2:30 am to see a light show of electrically charged sun particles skipping over the earth’s atmosphere, well, it’s enough to make you believe in magic.

So, what’s the lesson I’m sharing in this masterclass? Some preparation and a little discipline and effort will always reward you with great images much more than relying upon luck alone.

Here’s what it took to get this shot. The Northern Lights are best seen from north of the Arctic Circle, so, a long ride north was in order. We were in Alaska and the Yukon in northern Canada in August with a sunset time of 11:30 pm.

We set the alarm for 1:30 am as the darkest part of the night is between 1 am and 3:30 am. Sliding out of a warm sleeping bag and into the freezing air of the night takes a deep breath and some steely determination.

We’d also clicked through to a website called Aurora-service.org, which provides info on the strength of the expected Aurora and times the phenomena is potentially the most visible. We also had to plan ahead to have internet access in order for the predictive website service to work.

I made absolutely sure I was shooting in ‘Camera RAW’ mode and then, like most night-time shots, I set up my camera on a tripod (essential). With the camera set up, I used a flashlight to illuminate my bike so I could use my camera’s ‘automatic focus feature’ to set the focal length and ensure that my bike was in focus.

I then switched my lens to manual focus mode, effectively locking in the focal length. I used a wide-angle lens to capture as much of the sky as possible and set it wide open at f4. Trial and error taught me that 15 seconds was a great exposure length. I also turned on camera features that I rarely use.

I turned on in-camera ‘long exposure noise reduction’ and ‘high ISO noise reduction’. I used a remote trigger to minimize camera shake and delayed the shutter release by two seconds. To minimise the chance of light leaks (allowing excess light to reach the sensor) I also closed the eye optic at the rear of the camera.

Sounds like a lot of effort doesn’t it? That’s because it is, but I may never be in this situation in my life again, and I captured images that make me smile. So, plan, get prepared, make the effort and then let the magic begin. Oh yeah, and good luck!