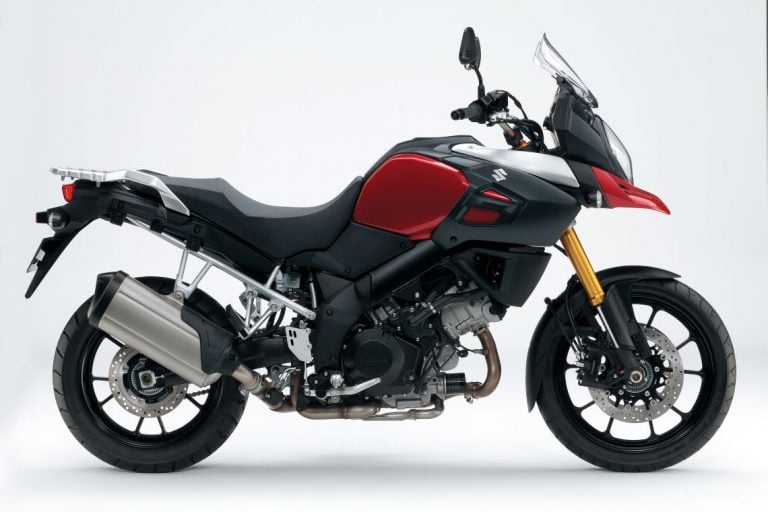 Emission regulations killed off the last one back in 2008. Now the big Strom is back. We travel to France for the official unveiling…

It’s been almost six years since the original V-Strom 1000 was last available to buy new from your nearest Suzuki dealership. That’s a long time to be out of the game, especially when the competition has moved that game on so far in the meantime.

The previous V-Strom 1000 was though by all regards a great bike, understated, reliable, efficient and with a great engine. It was a bike that just got on with the job in a no-frills manner, which at the end of the day, is all that some people want and need. This new V-Strom isn’t then a completely new bike, see it instead as a complete mechanical and cosmetic overhaul of the last one, designed to make up for lost time and win back some fans, not to mention make it emission compliant.

The design is obviously new, with the influence said to be that of the big DR of the eighties. The engine is an improved and redesigned take on the old one.

New parts and components include cylinder heads, cylinders, piston and rings, connecting rods, crankshaft, magneto and flywheel, clutch assembly, revised 6th gear and new spark plugs. Displacement is up from 996 to 1037cc, with power increasing from 98bhp to just over 99bhp at 8,000rpm. Peak torque increases from 74ft-lb to 76ft-lb, arriving 2,400rpm earlier in the rev range, at 4,000rpm.

Cylinder heads now carry two spark plugs per cylinder rather than one as before. Iridium plugs replace the conventional type. This is said to strengthen the spark and increase efficiency, which in turn should ‘yield higher power, more linear throttle response, easier engine start-up and more stable idle.’ There are now two ignition coils per cylinder, as opposed to one. New 10-hole fuel injectors replace the four-hole injectors of old, whilst a claimed fuel economy of 59mpg is a 16 percent improvement from last time.

A revised radiator has allowed the oil cooler to be deleted, saving approximately 1kg of weight from the bike, whilst the revised clutch now uses Suzuki Clutch Assist System (SCAS), working as a slipper clutch on downshifts. The clutch is now said to be 13 percent easier to ‘pull’ and Sixth gear is a redesigned ratio from 0.913 to 1.000. to give a bit more thrust in top gear.

The air filter box has been redesigned, whilst a single exhaust (making it a 2 into 1) replaces the dual pipes of the previous model, saving a total of 4.7kg.

The new exhaust features Suzuki Exhaust Tuning (SET) technology – a computer-controlled butterfly in the exhaust to optimise exhaust pressure (the mechanism is exposed on the outside of the pipe). The V-Strom 1000 also features Suzuki’s first traction control system, reducing engine output when it detects wheelspin. There are three modes: mode 1 offers lower sensitivity, mode 2 higher sensitivity. And the third mode is ‘off’.

The chassis is said to be ‘totally redesigned’. The key points are the low seat and slim bodywork, in part thanks to the slim V-twin engine design. The frame is also said to be stiffer and 13 percent lighter than before. The handlebars have been brought backwards, so too the footrests. The riding position has been redesigned for comfort. The wheelbase is also longer to give more stability; up from 1,535 to 1,555mm. Wheel size remains the same at 19-inch. The fuel tank capacity has been reduced from 22L to 20L to achieve a more ‘compact riding position’.

The forks are adjustable for damping and preload, whilst the front brakes are now four-piston as opposed to the two-piston stoppers of old. The bike now has ABS as standard, whilst the wheels are now ten-spoke (as opposed to the Colours will be Candy Daring Red, Pearl Glacier White and Glass Sparkle Black. Sadly, Glass Desert Khaki (bottom) won’t be coming to the UK first impressions It was good to see the Suzuki in the flesh. It would be hard to call it pretty, just in keeping with the current ‘adventure’ bike design language. You get the sense that price will be crucial to this one. If it comes in at or around ten thousand pounds – preferably cheaper – then it could prove a success for anyone wanting a slimmer, more affordable ‘adventure’ bike than the usual crowd, and that V-twin has always been popular with riders of the old model.

Questions remain as to whether a ‘proper’ DR replacement would have raised more interest, and indeed more sales. The V-Strom 1000 is perhaps indicative of what the market wants right now; the looks, but not necessarily the performance of a big trail bike. We look forward to riding the new Strom in the forthcoming months. three-spoke design of before). Tyres are Bridgestone BW501 at front, BW502 at the rear, with a higher speed rating, up from H to V. They are road-based tyres.

A three-piece luggage system will be available, tailored to fit the bike. The width of them is narrower than the handlebars and they can be removed without tools. The top case has a capacity of 35-litres, enough for a full-face helmet. The screen is now adjustable in three heights; normal, 15mm higher, and 30mm higher, with is also able to be set at three different angles, using a spring-loaded mechanism.

It was good to see the Suzuki in the flesh. It would be hard to call it pretty, just in keeping with the current ‘adventure’ bike design language. You get the sense that price will be crucial to this one. If it comes in at or around ten thousand pounds – preferably cheaper – then it could prove a success for anyone wanting a slimmer, more affordable ‘adventure’ bike than the usual crowd, and that V-twin has always been popular with riders of the old model.

Questions remain as to whether a ‘proper’ DR replacement would have raised more interest, and indeed more sales. The V-Strom 1000 is perhaps indicative of what the market wants right now; the looks, but not necessarily the performance of a big trail bike. We look forward to riding the new Strom in the forthcoming months.

Do you think a five-year delay is too long? We’ve waited to deliver the best machine. We realise customers have had to wait a long time, but on other hand, we feel like we’ve brought out the best bike we could, that it has been worth waiting for.

Has the BMW been the benchmark?

No. Our benchmark is our previous model and to improve on that, to make it lighter and more efficient. We choose our own direction. We don’t follow a competitor. The negative of the previous model was weight. Our customers talk of a BMW or a Triumph, but they want something slimmer. We have produced that with the new V-Strom.

Is it predominantly a road bike?

The basic design is based on the road, yes, but it’s capable of tackling unpaved road, but not like a Motorcross challenger.

Are there any plans to produce another DR?

Where does Suzuki see the ‘adventure’ market going?

No, that is an issue of weight.

We are searching the possibility. If demand is there we will do that, though our fuel consumption is the best in class. The tank is twenty litres, with 59mpg to give a four-hundred-kilometre range (250 miles).

Is there going to be a new version of the V-Strom 650 based on the new styling?

No confirmation, but likely.

Any news on price for the new 1000? (likely to be confirmed by the time we go to press)

Around ten thousand pounds. We cannot officially confirm that, but around that figure. The price point is part of our strategy, it has to be somewhere between the 1200cc bikes and the 650cc bikes. There is a big jump in price from 1200 to 650, we see some opportunity between that.