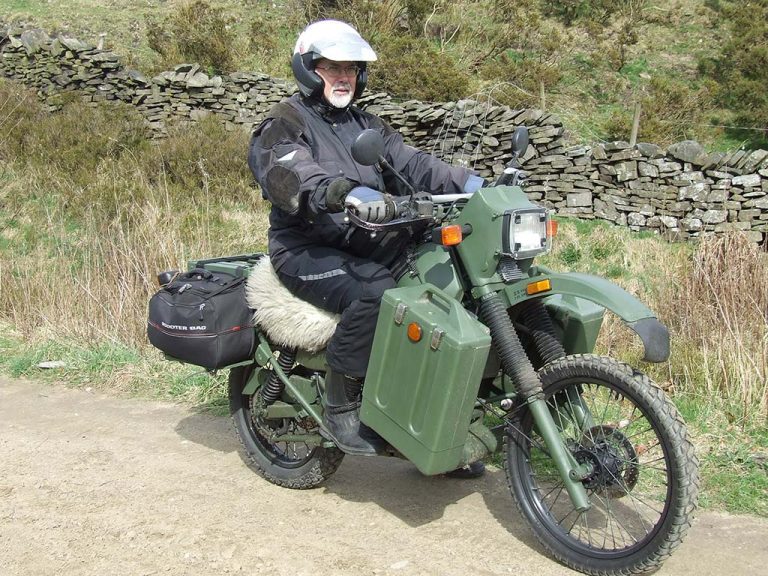 Motorcyclists have ridden around the world on everything from step-throughs to Goldwings.

Virtually any machine will do the job but if you want to go off road the choice is reduced. Important factors for me when choosing an adventure bike are weight, economy, comfort, robustness, reliability, spares back-up, mechanical simplicity and solo; the MT gets a tick in all these boxes. It’s a very versatile machine, a sort of two-wheeled Landrover. You will find owners using them for the daily commute, as courier bikes, both as trail and trial bikes and some make an appearance in twin shock Enduros.

MTs are relatively rare. It’s quite normal for total strangers, bikers and non-bikers to approach me in car parks and petrol stations to ask about the bike. It’s commonly assumed that they saw service in WW2, yet MT350s were only withdrawn from service in April 2009. It’s a pity that Royal Enfield didn’t manufacture the MT because the first part of the company’s slogan ‘built like a gun,’ would have been perfect for my ex-army bike. Not so much the second part: ‘goes like a bullet’. With a max speed of around 79mph, that’s not strictly true of an MT. It may not be fast, but being retired I have all the time in the world for my travels. 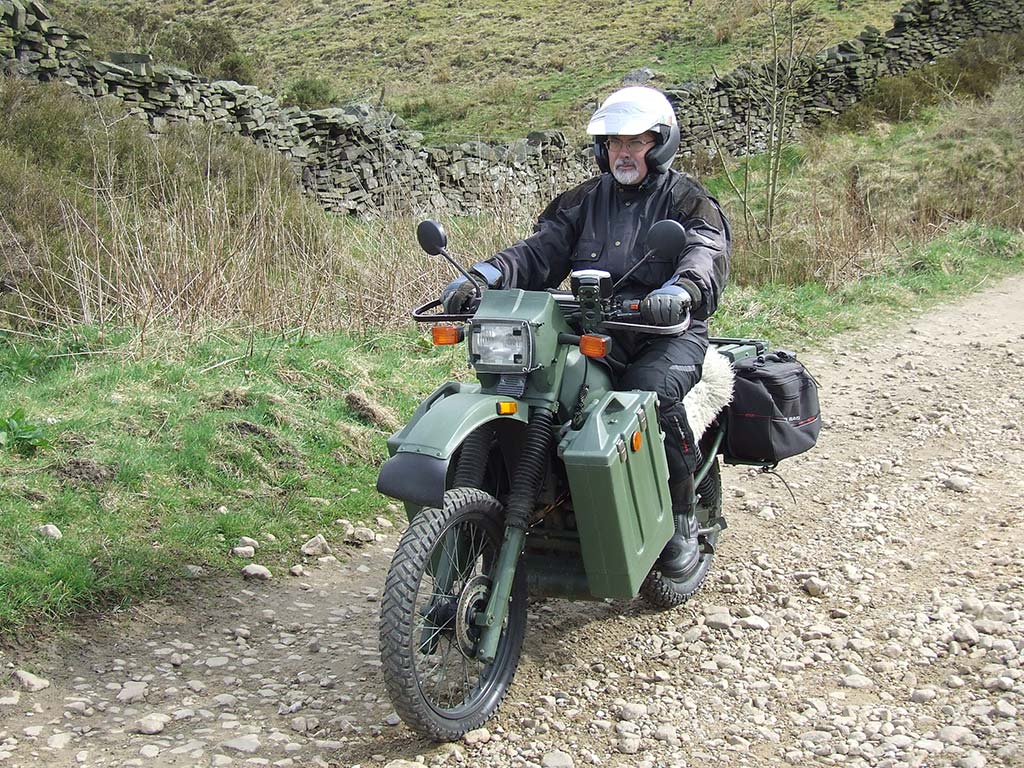 My first sighting of an MT350E was while refuelling during the night stage of the 1997 Welsh National Rally on a garage forecourt in Aberystwyth. The two MTs, ridden by soldiers, were just leaving, having fuelled up before me. I had owned an ex-army Armstrong MT500 which I used for trail riding and competing in MCC trials in Lands End, Exeter, and the like, so my attention was drawn to these bikes. Several obvious changes were apparent in the Aberystwyth specimens–disc brakes instead of drum, forward mounted watertight plastic panniers instead of rear-mounted canvas ones, and an electric starter had been added.

The MOD has taken the decision to stop using motorcycles and therefore all its fleet of MTs are being sold off via auctions. They can be bought from as little as £600 to about £1,500 depending on condition. I bought mine privately, stripped it completely and have rebuilt it, replacing some worn parts. Unlike owners buying their shiny new bike from the showroom I have an in depth knowledge of virtually every nut and bolt on my MT.

Tipping the scales at 162kgs dry weight, the MT350E compares favourably with the new Tiger 800 at 215kg. The air-cooled engine is fed via a carb, so no need for complicated fuel injectors and moderators, giving a consumption rate from 30 to 53 mpg depending on conditions (off-road /onroad). There’s no CAN-bus complexity either, just good old-fashioned wires. It’s reassuring to know I can work on my bike no matter where in the world I break down. 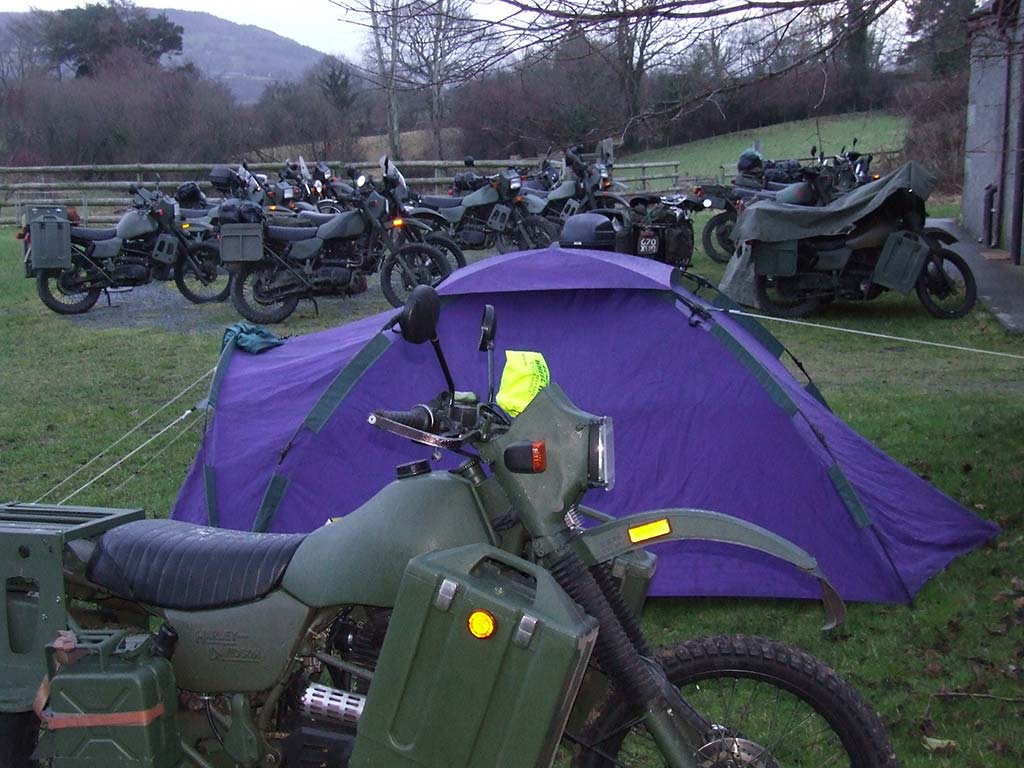 An army bike has to be robust, and the MT is certainly that. In the event of a malfunction, however, spares for both the engine (Rotax) and the cycle parts are readily available from several UK-based sources. A well-stocked KL Motorsport of Bolton, which supplied the military with spares, will post parts to you anywhere around the globe. You don’t have to be a Swiss watch mechanic to work on these bikes either.

For me, at 6’ 2’’, I find the riding position suits. I do admit to having a sheepskin cover on the saddle and I have widened steel pegs, again for comfort when stood riding. The MT’s rear shocks are Ohlin and being designed for a GVWR of 366kg is over sprung, giving a firm ride if unladen. Although designed to carry two in an emergency situation on the battlefield, there is only one seat, which means an uncomfortable journey for any pillion rider perched on the rack.

Equipped with a 13.2l steel tank (150 miles range) I usually carry two 5l jerry cans, extending the range to 250 miles. Two 100mm diameter plastic tubes with end caps, one mounted across the frame in front of the engine holds my MSR cooker fuel bottle and another running under and parallel with the stainless steel silencer carries a 1.5 litre water bottle. I have extended the original rear carrier in order to support two soft luggage panniers and carry a tent, spare tyres etc. The front panniers are used for holding spares, oil, tubes, filters, fuel, pump, waterproofs etc. A bracket on the bars carries the hardwired Garmin GPS and a rolling road is clipped on centrally to carry more route details. There are two further rectangular plastic containers; one is used for carrying tools and the other for holding maps. 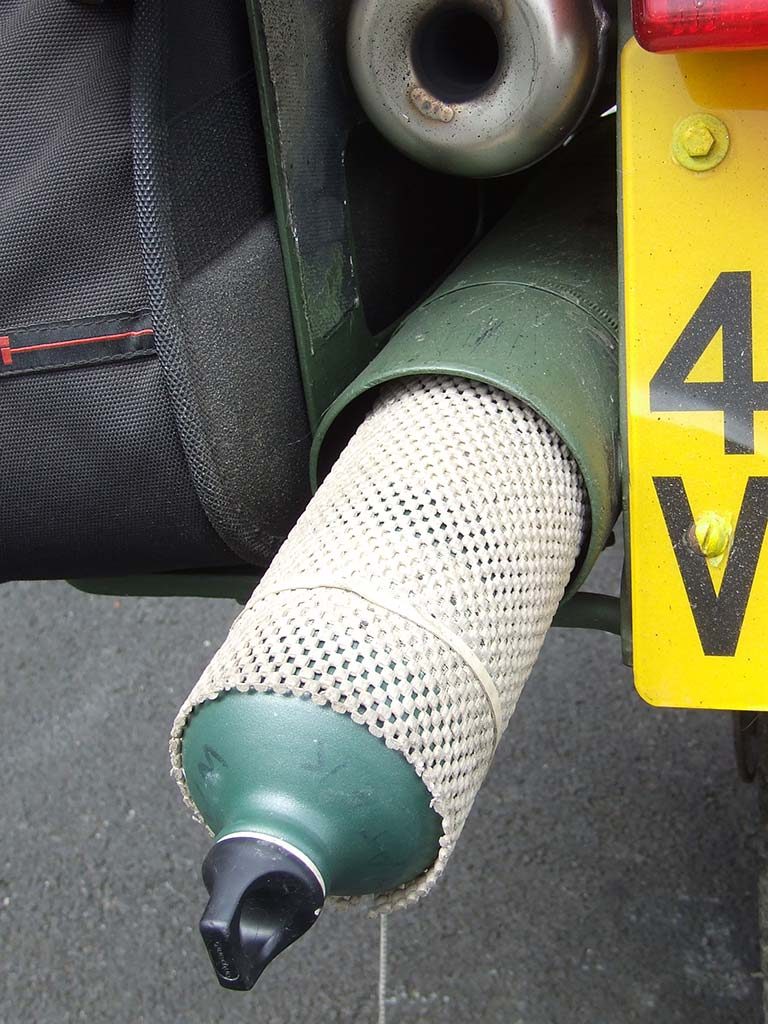 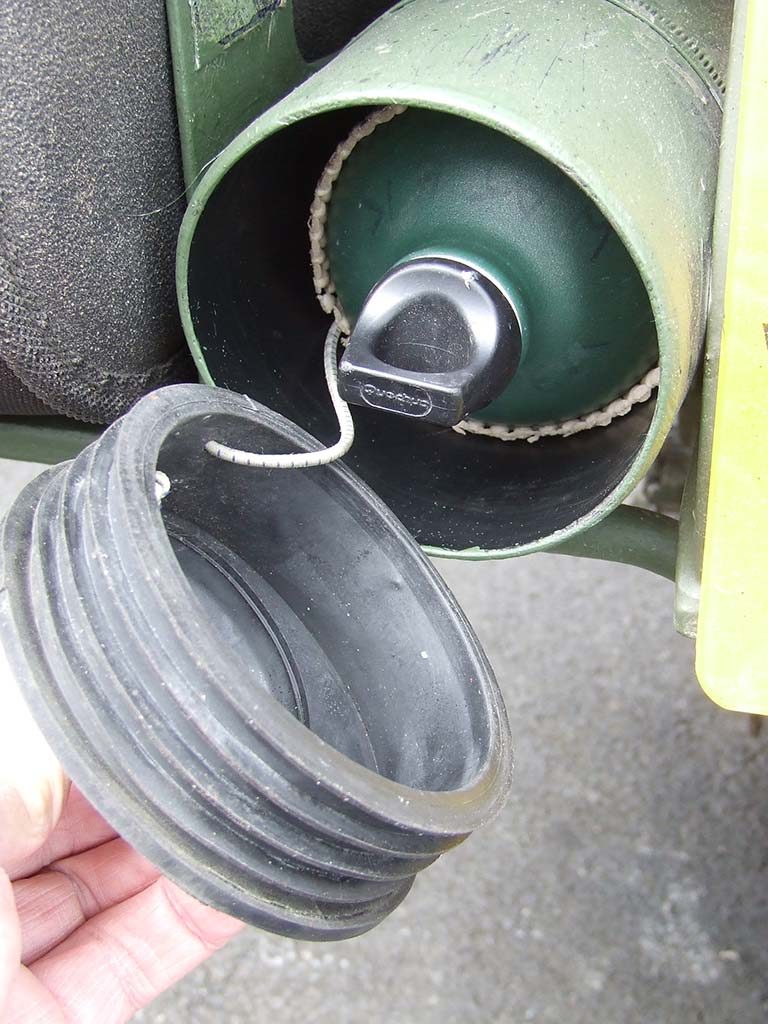 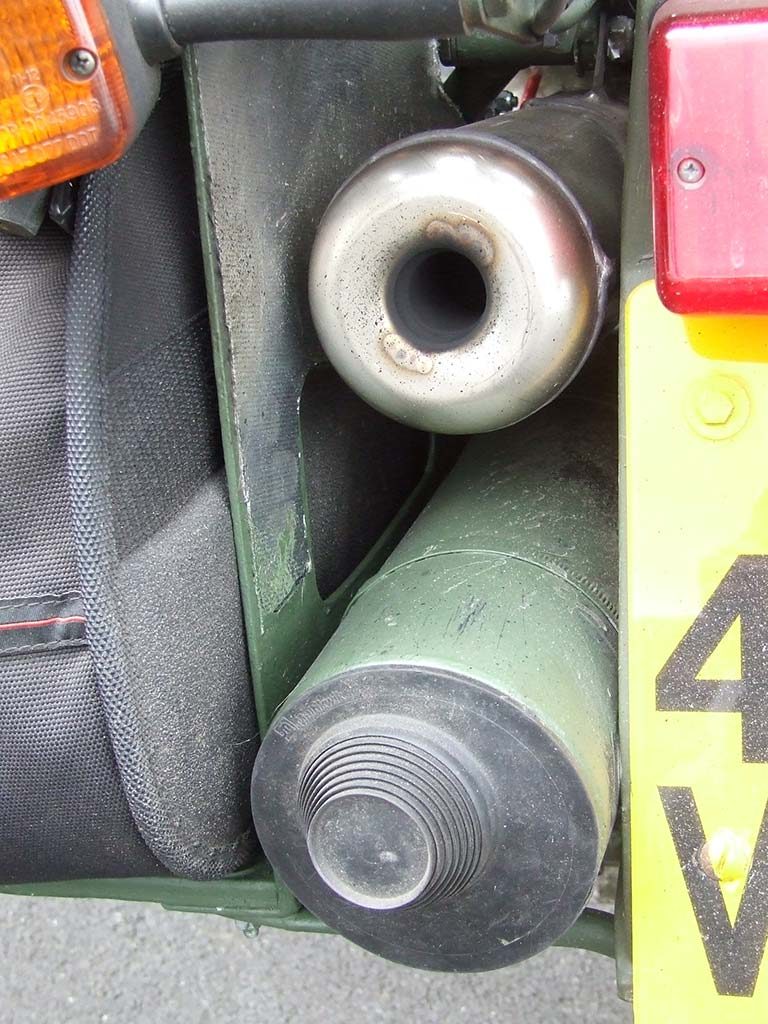 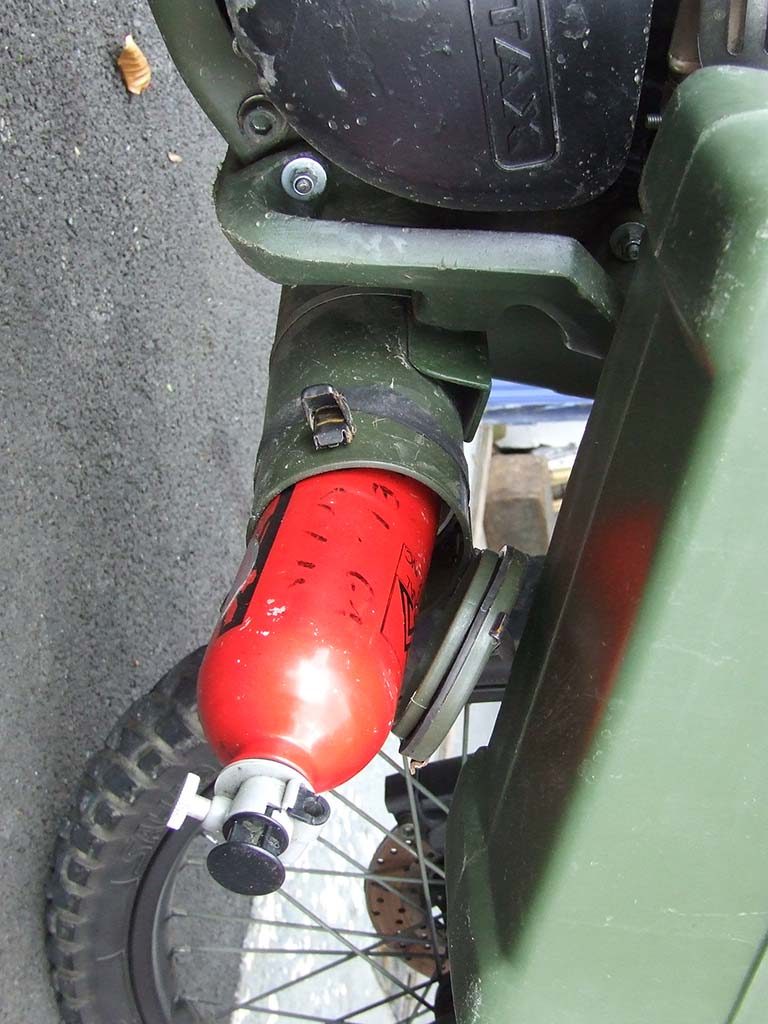 Further farkles include the removal of the Enfield SA80-IW holder and the addition of gaitered front forks, which are of motocross proportions made by Marzocchi. The engine’s sump is protected from rocks by a substantial steel plate and a plastic guard at the front. Instead of fuses there are thermal overloads. The engine has an electric start, however in the event of battery or starter problems there is also a kick-starter.

Harley Davidson / Bombardier specify a fording depth of 12 inches however I know many MT owners who have well exceeded this depth when out trail riding. The furthest I’ve ridden an MT is to the Stella Alpina Rally in Italy. On this occasion, I replaced the two front panniers with two 10l jerry cans, extending my re-fuelling range to some 400 miles. The arrival of an alternative to the KTMs and BMs outside the station in Bardonecchia caused several heads to turn for a second look at what lay under the green paint. While some riders found the Sunday morning climb a challenge on their selected steed, the MT, designed for this terrain, made the ascent easy. I am planning to ride to the Pyrenees on it in June this year and to Mongolia in 2012. 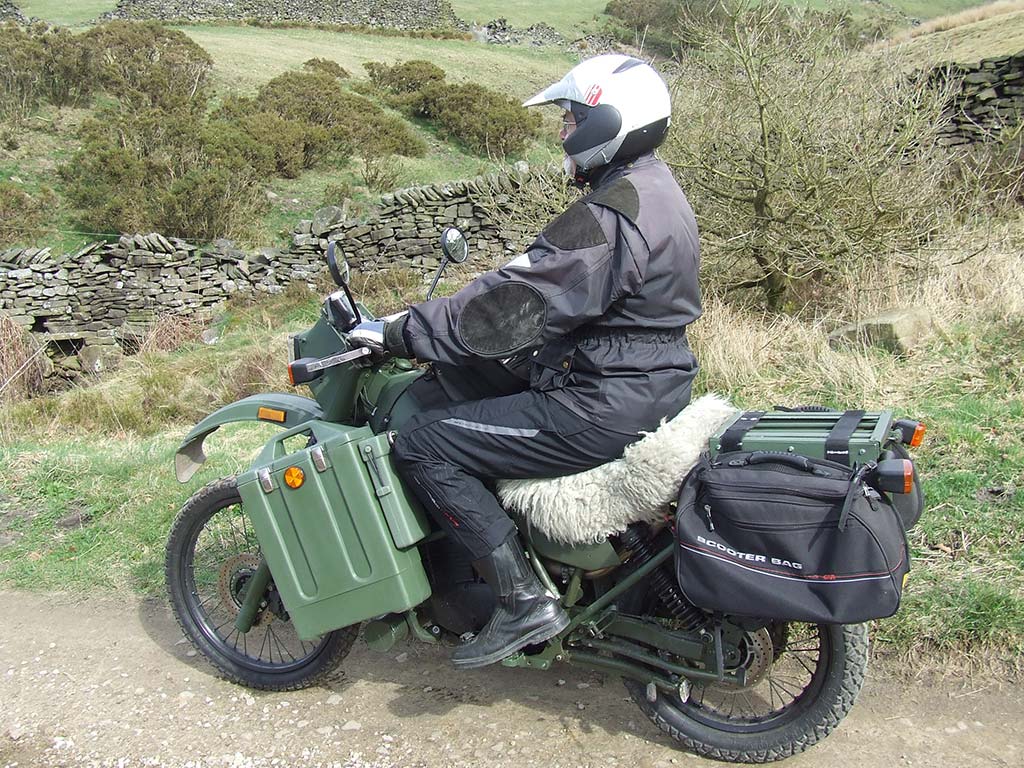 There is an active MT Owners Club with hundreds of enthusiastic UK owners and members from as far apart as Poland to the States (www.mtridersclub.co.uk). Owners can obtain sound practical and supportive advice from the club’s website, which is invaluable, because unlike most other makes of bike there is no information or help available from the manufacturers.

The MT on Dave…

‘I had lots of adventures during my time with the army, and when I retired I thought my adventuring days were over. Thanks to Dave’s dedicated farkling, I’ve since tackled the Stella–a piece of cake! – and I’ve heard Mongolia’s on the cards, too, which I’m very much looking forward to. Being an MT, I naturally attract a lot of attention wherever I go, but luckily for me, Dave’s happy to share the spotlight with me.’