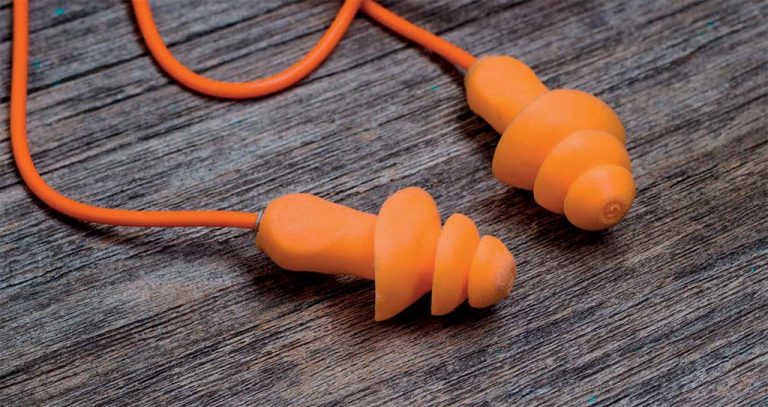 Why don’t you wear earplugs? Too fiddly? They fall out? They don’t work? I can’t hear sirens or other road users? Does any of that sound familiar? Mike denning explains why every motorcyclist should protect their ears when out on the bike

Many motorcyclists are unaware of the dangers that our beloved machines pose to our hearing. If the danger was immediate then we would all pay closer attention, but just because the risk of hearing loss is years ahead, it doesn’t make it any less important.

Noise Induced Hearing Loss (NIHL) is real and has been documented in the motorcycling world since 1992. Surprisingly, the damage is not caused by the engine or exhaust noise but rather by the turbulent airflow as it rises from the windscreen and hits the helmet.

As a rough guide, noise from normal conversation is approximately 60 decibels (dB) and a police siren is 120dB. It is generally accepted that anything less than 75dB is ‘safe’ for long term exposure but anything over 85dB is ‘unsafe’.

In tests with a microphone at the rider’s ear, a motorcycle will generate approximately 90 dB at 37 mph and 110 dB at 100 mph. So, at all but the lowest speeds you are exposing your hearing to dangerous noise levels.

But, how does the noise damage your hearing? The ear is a miraculous piece of evolution which changes sound waves into electrical impulses. Sound is transmitted as vibrations to our inner ear via both air and bone conduction.

During ‘air conduction’ the sound is caught by the ear cartilage and directed down the ear canal. It strikes the eardrum which transmits the vibration into the cochlear. The cochlear contains fluid and a membrane that is covered in tiny hairs which translate mechanical movement into electrical signals that are detected by the brain.

It is these tiny hair cells that are destroyed by loud noise and, just like on the head, human hair cells don’t grow back.

In ‘bone conduction’, the vibrations avoid the ear canal and are directed to the cochlear directly via the skull. This is still very effective and can be demonstrated by comparing the sound of your own voice when talking normally and when listening to a playback.

When listening to the playback you are only hearing your voice via air conduction and lacking the deeper tones associated with conduction via your skull directly from your voice box to your cochlear.

Three things determine the extent of any damage: the volume of the sound, the length of time you are exposed to it and how close you are to the source.

So, realistically, you can either ride your bike slower (below 37mph), ride it less or you can try to block the sound getting to your ears. Earplugs are the most practical way of decreasing the level of wind noise reaching your inner ear.

Even if your helmet boasts the best sound insulation on the market, earplugs are still a good investment. Why? Firstly, the best helmets still only reduce noise levels to approximately 82dB at 62 mph. 82dB is not in the ‘safe’ category and I suspect you will ride faster than 62 mph for long periods, thus exposing yourself to risk.

Secondly, we know that the main source of wind noise is turbulence so a different screen, a different rider and a different helmet may all add up to a higher noise level.

Earplugs have been shown to have three main benefits: firstly, whilst decreasing dangerous noise levels they allow detection of other road users because they don’t cut out bone conduction of sound. Secondly, they decrease ‘threshold shift’.

This is the phenomenon of taking your helmet off and suffering a change in sound perception: perhaps the world sounds dull or there is a whistling noise known as tinnitus. This threshold shift, whilst temporary, is an indication of dangerous noise levels and if you recognise the description, you may well be damaging your ears already.

Whilst any earplug is better than none, try to look for ones that boast the European Standard for Ear Plugs (EN352-2). Ensure that they fit your ear and that they are inserted correctly as per the advice on the packaging. When inserted correctly the world should sound dull because they need to inhibit air conduction to do their job.

Finally, earplugs are not for everyone. Some people report dizziness and genuine discomfort from wearing them. In this case you need to aim for the best helmet you can afford and be aware of the factors that put your hearing at risk. If you are on the fence, why not try them for a few days? You never know – you may learn to love them! Ride safe.