A Short Ride in the Jungle (book) 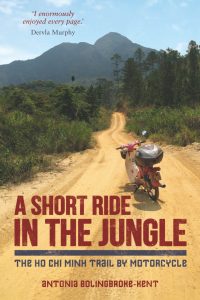 A Short Ride in the Jungle tells the story of Antonia Bolingbroke-Kent’s ride along the Ho Chi Minh Trail aboard a pink 25-year-old Honda C90 affectionately titled the Pink Panther.

This isn’t Antonia’s first attempt at big adventuring, as in the past she has ridden a tuk-tuk back to the UK from Thailand, and her day job is helping produce and recce such TV shows as the World’s Deadliest Roads.

Look beyond the novelty bike then and what we have here is an exceptionally well researched and documented account through a part of the world still with so many secrets and consequences of what went on there. It is a very personal book, emotional in the way that Antonia connects with the surroundings and with the people she meets.

The Ho Chi Minh Trail for those not familiar is the network of roads and trails that linked the north of Vietnam with South Vietnam, acting as the supply line in the fight against the US backed South Vietnam. Often alone, riding tracks through the jungle, Antonia follows the trails into Laos and Cambodia, meeting the bomb disposal teams that still to this day clear up after the devastation of the brutal Vietnam War.

Antonia documents the deforestation of Laos, the bribery and the corruption of Cambodia, and lays clear the effects and aftermath of the war that gave rise to the trail. This book is perfectly written, demonstrating just how travel by motorbike can be used to inform, entertain and educate the reader. Look beyond the pink bike; this is a great book. 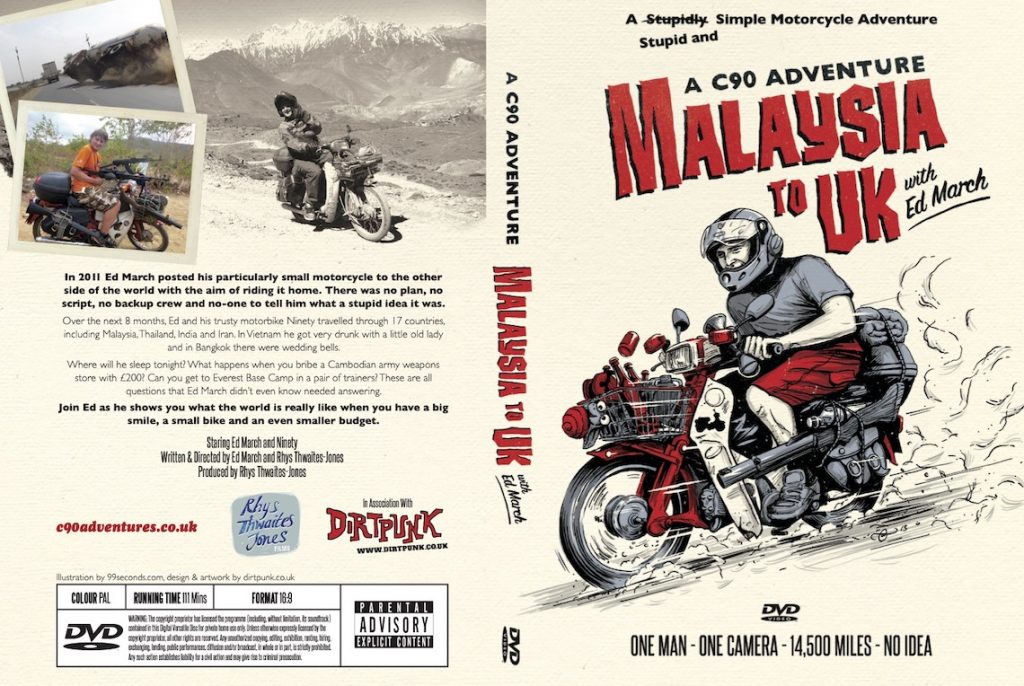 This film has been a long time in the making. It began with a Kickstarter campaign (a kind of online donation system, based on the faith that the projects you invest in bear fruit) at the beginning of 2013, with promise of the DVD almost a year ago.

There’s been re-edits, personal investment from Ed, and quite clearly from the first viewing, a lot of time and effort have gone into it. Has it been worth the wait? Yes, it most definitely has. In a nutshell, the film documents Ed’s courageous ride from Malaysia back to the UK aboard his trusty C90, shooting footage with a digital camera along the way.

What makes this DVD so unique is the editing of the footage. In a way, it mimics the work of Austin Vince, but very much with its own flavour and style; quirky, humorous, restrained, but also quite bonkers in some of the footage captured, and also in Ed’s approach to travel and adventure.

It’s simply the tale of a twenty-something opening his eyes to the world on what was a 14,500-mile journey, with passage through such places as Vietnam, Nepal, India and Iran. He has troubles with the bike, at one point rigs it up with a couple of chain guns, and in Thailand even tries to marry it.

You might have seen some of the individual clips on Youtube, but this edited movie must go down as one of the freshest, most unique motorcycle adventure movies on the market. Ed’s next plan is to ride the same C90 down from Alaska to Argentina. Help the lad out with some petrol money and buy a copy. You won’t regret it. 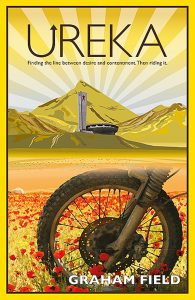 Graham’s first book, in Search of Greener Grass, has been one of the best books in the adventure motorcycling genre in the last few years. It was good because it was so accessible. Told in a day by day diary-style format, Graham’s epic trip to Vladivostok aboard his trusty Kawasaki KLR650 was broken down into bite-size chunks, making reading it much like reading one of Jeremy Clarkson’s compilation books, where you can just go from chapter to chapter without any great chunks of text to wade through.

Graham’s second book, Ureka, is much the same, proving the first book was no fluke as this one is just as engaging and funny; subtly funny, but also realistic in the way Graham portrays life on the road. He doesn’t romanticise it, he tells it as it is and really captures the rollercoaster nature of any big trips; from the highs to the lows.

The story is about Graham’s attempts to ride to the far East, but also the revelation he had mid-way through when he realised that the destination wasn’t so important and that sometimes it’s better to concede a certain defeat and go in the direction that feels right, even if it’s different to the direction you set out to follow.

All in all, this is a very readable book, written by a very down to earth person, who isn’t perfect, but who doesn’t profess to be either. It captures the heart and soul of adventure travel, and for that reason, is well worth a read.