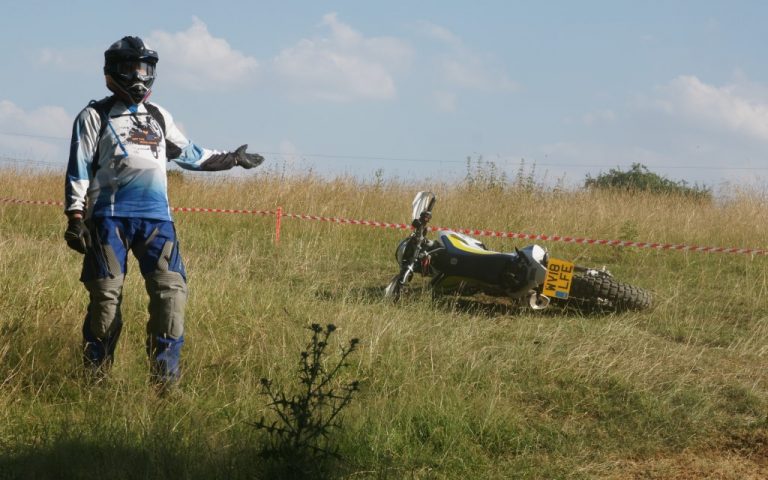 I was riding with four friends on a variety of adventure bikes along some green lanes we know quite well. One lane was much muddier than I expected it to be. My mate went down it first on his KTM 990, and as he was on 70/30 tyres and is pretty handy, he got down without any problems. I went next on my new Africa Twin on more road-biased TKC80 tyres.

On my descent, I realised that it was too much for me, my bike and my tyres. As bad luck would have it, we then heard the braap of two strokes behind us, and a group of lads on motocross bikes decided to descend the hill, alongside me. As one passed me, pretty stupidly I think, my tyres finally let go. My front end washed out and I slid into the lad on the crosser, who ran over the front of my bike and fell off. My bike then slid down and hit my mate’s 990 and my mate picked up a groin strain, even though the bikes did not fall over.

I have now got a letter of claim from the lad on the crosser, including costs of a replacement hire bike while his apparently undamaged bike is undergoing repairs and inspection and clocking up £25 per day storage. My mate has said, “if you are going to lose your no claims bonus anyway I would like to claim, but I am not going to stuff your no claims bonus for a sore groin.” My insurers seemed pretty clueless.

Their original position was they thought that I was racing motocross, on an Africa Twin. However, they now seem to accept that they had to indemnify me, but isn’t the lad on the crosser really to blame? He could see that I was in difficulty, but still came alongside me in a fairly steep-sided, slimy, rutty and rooty narrow lane. The crosser had no lights or registration plate so I am pretty sure it was illegal.

We will unpack this. As a preliminary point, the collision occurred on a public highway, so your insurance covers you as a matter of contract. It also covers you as a matter of European law outside of your contract. I have very rarely seen policies that exclude cover for ‘unmade roads’ and these are usually medical insurance exclusions rather than road traffic insurance exclusions. The long and the short of it is you are insured. However, on the assumption that the crosser was not street legal and being used on what in law is a highway, had you not been insured, the crosser would be on a fairly sticky legal wicket based on his illegal bike. The basic rule of bringing an uninsured claim is that you must be insured if the other guy isn’t.

In so far as your opportunistic ‘tosser on a crosser’ is concerned, I agree with your analysis. He deliberately and impatiently passed a bike which could reasonably be expected to go over, without negligence on your part. I love the idea that he has had to hire another bike to replace his at close to £700 per week. That is a claim of the utmost bollocks because his use of the bike was illegal, so the law won’t recompense him for not being able to carry out an illegal act.

You really have hit pay dirt with a dodgy idiot who cannot look after himself and an equally scumbag claims management company who are desperate to get yet another money-making bike out on hire. Dirt bikes fall over in dirt. Adventure bikes fall over and do so even more spectacularly on technical terrain. He knowingly took on the risk of making an unwise and tight overtake. There is a concept in all UK law, and whilst I am qualified to comment on the English and Welsh position, I am aware that exactly the same principle applies in Scots and Ulster law, but there may be nuances in Scotland and Northern Ireland which escape me as an English lawyer.

This concept of negligence is known as ‘volenti non fit injuria’. I can go into rather technical explanations, but a good rule of thumb is if you look at the situation and say “that bloke was asking for that to happen” then volenti is quite likely to apply. If you do something intrinsically risky and that risk comes to pass, then the law is quite quick to say, ‘live with it’.

Your mate at the bottom of the hill does have a rather stronger claim in law, but I still would not bother if I were him. He was stationary and had completed his manoeuvre. He did not place himself in danger and you struck him with your gently sliding Africa Twin. He has a case, for a groin strain, but I wouldn’t bother. He may get a few hundred quid, he will have to make all the running himself, including his own medical report and he will hate himself forever. Yes, he has a case. No, he should not bring it.