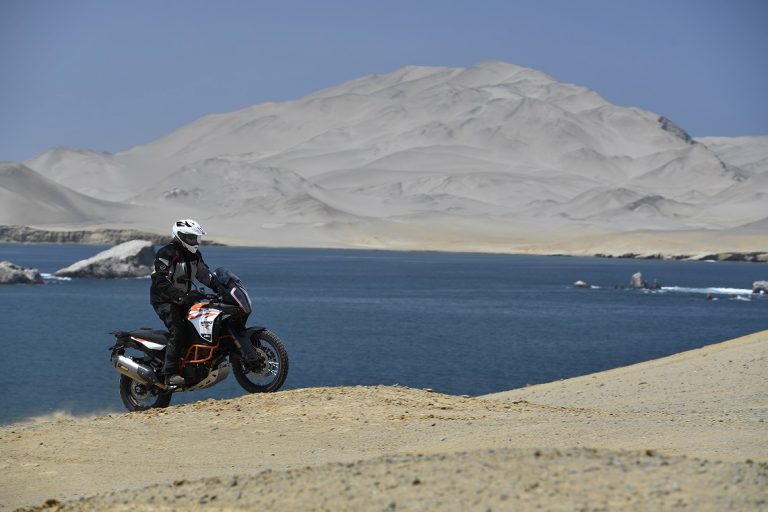 I must confess since I picked up the KTM 1290 Super Adventure R, I’ve ridden it just once, and that was a 15-mile blast from the ABR office to my house. The lack of riding wasn’t really a choice of mine, I’d have been out on it every day were it not for being hospitalised with a heart infection.

Now, while a 15-mile ride isn’t exactly an intensive test, it told me a couple of things about the bike. The first was just how incredibly powerful it is. It’s telling that the only words I could muster when I dismounted were, “Holy ****, that is mental!”

I’ve heard the 1290 being called a sports bike on stilts before, and even dressed in its more off-road-ready get-up and adorned with its ‘R’ moniker, this bike is a fierce monster on the roads that just wants to tear your arms off as you pull away from traffic lights. And never has having your arms torn off been more thrilling and enjoyable.

Secondly, and this goes hand in hand with the above point, riding through town is not where this machine wants to be. I honestly found it hard to stay under 30mph, and you’ll want to keep one eye on the speedo at all times if you want to keep your licence.

In the past six weeks that I’ve been unable to ride, I’ve been counting down the days ‘till I can throw my leg back over the ridiculously high (890mm) saddle of the 1290 and feel it trying to dislocate my shoulders again. In the meantime, I’ve had to make do with acquainting myself with the new TFT dash, and I’ve spent a long time sat in my garden fiddling with the controls.

It’s the first time I’ve ridden a bike with such a clear dash, and the TFT is definitely a welcome addition. All of the information that you need to see is crisply displayed in full colour, and it only took me a few minutes to become fully accustomed to using the four navigation buttons on the left handlebar.

It’s here that you’ll change between rider modes (there are four available: sport, street, rain and off-road), flick between ABS and traction control settings, and activate the heated seats and heated grips.

If I’m being honest, I prefer the simplicity of having a dedicated heated grip button on the bars, but the fact that they’re there as standard is very welcome. In a similar vein, with the heated seats being controlled through the dash, there’s no way for the pillion to activate theirs without having to disturb the rider.

New for 2018 was the introduction of turn by turn navigation to KTM’s My Ride app, which works in tandem with the Bluetooth-ready dash, and while I’ve not had the chance to try it out on a ride, it looks like a brilliant addition, with instructions and maps being displayed on the dash in front of you.

The only downside? The My Ride app (available on both iOS and Android), which contains the navigation functionality, costs £7.99 – for a bike of this price it’s the sort of thing you’d expect to be thrown in as part of the deal.