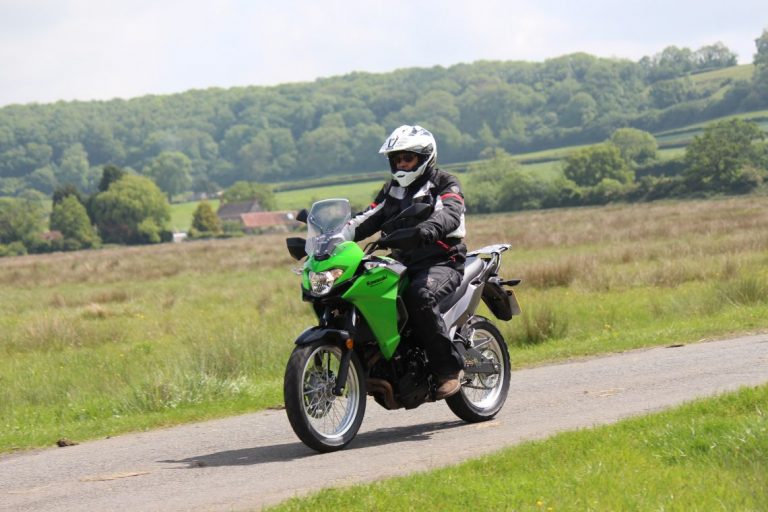 Less is more, or is it?  Words: Alun Davies

A few years ago, the perfumed half of the living room decided she wanted to take control of the handlebars rather than spend the rest of her life gripping my ever-expanding waistline. So, with a CBT in the bag off we went to the local Honda dealer and picked up a CBR125.

All was going well until she had a slow but frightening spill at which point the instruction ‘my bike is now your bike’ was shouted down the road. And there ended our vision of riding two abreast into the wide blue yonder.

I mention the above as in the pre-off days, when I’d be tootling through the lanes with a 125 in the mirrors, my thoughts would turn to what bike to buy my beloved after she’d passed her test.

Now, in technical terms, she’d be described as slim and dainty, hardly the sort of material for a 200kg plus adventure bike, but having seen and now thrown a leg over the new Versys 300, I know the answer.

There’s going to be a full review coming up in the next issue of ABR but for now let me just say that having attended the UK launch and spent some time riding our new long-termer around the badlands of Warwickshire, I’d have been delighted to have recommended the Kawasaki to my other half.

The 845mm seat height would have been manageable, the 173kg weight is well balanced, the power is adequate and (obviously) manageable, the build quality is good, and it’s about as nice and easy to ride as it gets.

On the other hand, she’d have probably wanted a ballistic Ducati Multistrada Enduro.

It’s been a long time since I’ve ridden a small-capacity road bike and I’d forgotten just how much fun can be had casually bopping along or opening one up, ducking behind the screen and squeezing every last ounce of speed and power out of a machine without scaring myself to death.

There’s a lot of pleasure, relaxation and fun in riding a smaller bike and I’m looking forward to getting to know the Versys 300 over the next few months.

In the meantime, what I can say is this: the bike does have a couple of odd features.

The seat is so firm, no, make that hard, they must have used a slab of rock for the cushioning, and the gearing could be better.

More about that later but let’s just say 8,000rpm for 70mph is a bit revvy. Then again, maybe it’s time to tone things down to a more sedate 50mph and enjoy the scenery.