Inside The Mind Of An Adventure Rider 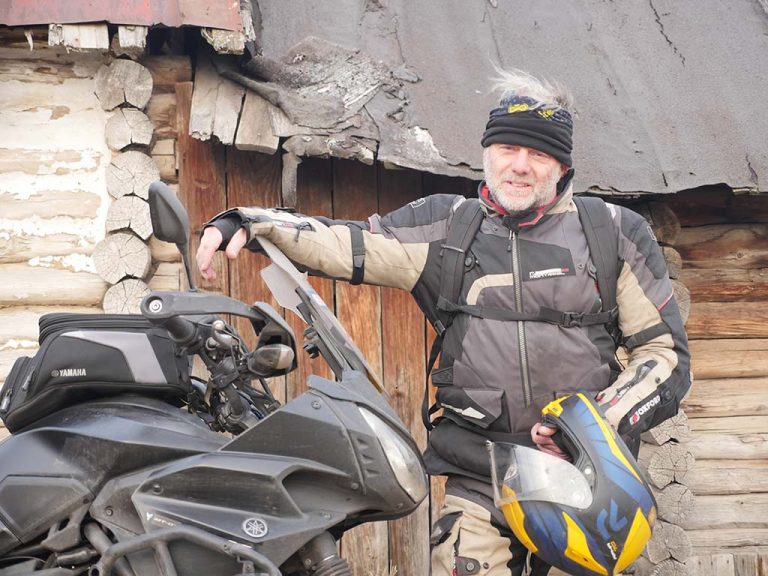 For wing flying, read ‘motorcycle adventure riding,’ and you suddenly become part of a new survey in the adventure travel market in the Americas and Europe. Th e jump in market revenue, according to a study by the George Washington University on behalf of an influential travel trade association, went from $89 billion in 2009 to $263 billion in 2013. Kite surfing and paragliding are considered hard adventure; canoeing and hiking are a little softer. Motorcyclists are definitely in the tougher part of the survey.

However, I contend adventure bikers are a unique and specific category. Th e average adventure traveller is male, around 36 years of age with a four year degree and an average income exceeding £44,000. 48% are single; they spend an average of just under £1,000 per trip and around £280 on gear each year. Spot the differences to the people in the sport we all know? Trips start at that price but can include selling the house, and as for gear, £280 buys you a less than top of the range helmet. What about the bike?

Speaking personally, 95% of clients on my own motorcycle tours are married and are in the 50+ age range. Equally I notice the relatively fewer independent travellers who fill the pages of ABR so bravely, are similarly aged, have had to deal with some extrication from family life and in a minority of cases have sold everything they have to provide the income they require to do that one big, possibly ultimate, long term journey.

The proliferation of new models of adventure bike, an advance supported and instigated in some ways by companies such as Touratech, Kriega, Metal Mule and Adventure Bike Rider magazine itself has dominated the motorcycle industry of recent years. If adventure motorcycling is still the hot topic in most bikers’ minds, what exactly is inside the motorcycle adventurer’s head?

agree climate and natural beauty are two of the most important factors when choosing a destination. Th is fits with how riders I know prioritise where they wish to ride. A forest scent, a mountain view and a few physicals around hairpin bends veritably puts a bit of poetry into our hearts.

There is a third consideration. Adventure travellers select activity options in a destination – the Andes, the Alps, a spin with Eagle Rider across Route 66 – whilst non-adventurers chose friends and family as their top priority. I have a hunch that adventure bike riders cleverly choose their family and friends from a select group of individuals, and we know who they are.

They’re assertive, head-strong, brave to the point of being courageous, foolhardy, have a dubious taste in heavy metal music whilst compulsively showing attention to detail, and are known to us all as motorcycle enthusiasts! Enjoy your riding you impulsive people!

Nick Sanders will be exhibiting at this year’s Motorcycle Live at the NEC in Birmingham between 18-26 November. He’s literally bringing his lounge to the show halls so that he can speak to riders about his adventures and, the best part, if you take a copy of ABR to his stand, you can get his book absolutely free. What a man!