Author: Austin Vince
Home
How To

How to film a motorcycle travel documentary 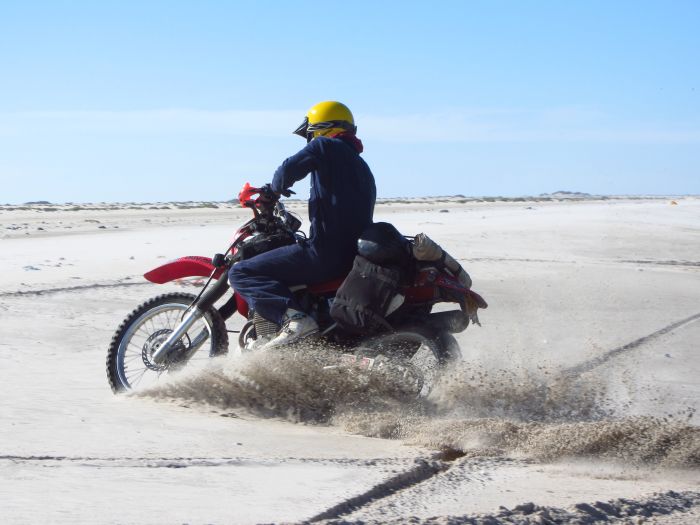 Master of his craft Austin Vince talks us through the basics of making a great film.

Do you really want to make a film?

If you want to spend a fortnight whizzing around Morocco then the logistics and planning don’t need to kill you. It’s pretty straightforward. However, a nine month trip, possibly requires resigning from work, shipping the bike, renting out your home etc. Anyway, the stakes are higher, the effort required is greater.

The same is true of making a decent film; a short, music-driven, Go-Pro-rich, pop video mash-up will take a couple of evenings to edit and by its very nature, is a random montage of just ‘stuff’. There are almost no rules with regard to creating this kind of thing. This is great fun but is not a proper film. It’s known as a ‘short’ or a ‘montage’. If we were eating, this would be a snack.

A proper film will be somewhere between 20 and 60 mins and is designed to have the feel, style and quality of an actual TV programme. This article is to help you make this type of film, not the short mash-up style. If we were eating, this would be a three course meal. To create this type of film is not beyond the skillset of the layman, it’s just the time and effort to see it through is overwhelming. Austin’s Law states that the commitment the film requires is about four times as much effort and expense than the actual bike trip required! Ignorance of Austin’s Law is why many an ABR’s bed has a shoebox full of unedited and uneditable tapes beneath it.

Still interested? Good. The spiritual rewards of being an amateur film maker, but making something that looks professional, are great. If you are ready for the challenge then read on. 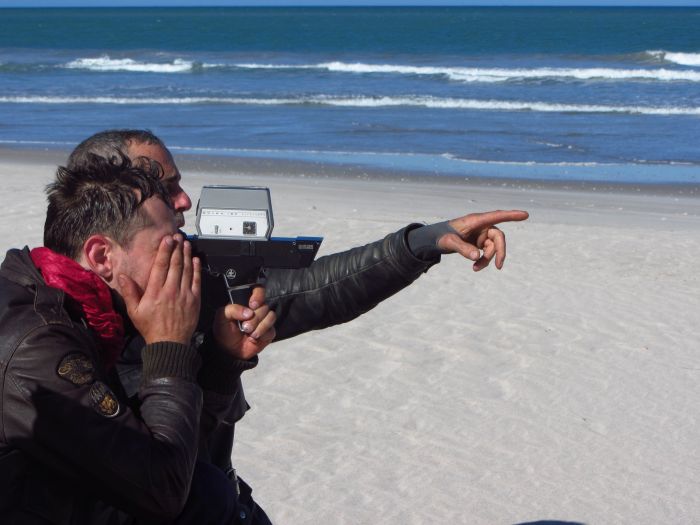 There is only one rule, and that is only move a ‘filming’ camera if you can pull it off 100% smoothly. Poorly executed cam moves are what invariably reveal that a production is amateur not professional and vice versa. Good, smooth, well composed moves will get your amateur film mistaken for a professional production.

Things to remember:
a) If you widen, make sure you reveal something interesting
b) Always go from and to something interesting
c) Sorry, you cannot use a pan to compensate for the narrowness of the camera’s lens and hence use it to take in the whole field of human vision.
d) Start and finish with four seconds steady
e) Do not accelerate or decelerate speed of move, a pro would never do that.

SATS – The Sequence And Transtionals System

This is the basic structure of your finished film (yup, it’s the recipe). It informs every single thing you do with the camera. A stone-cold amateur, who works to this system really can produce a viable Adventure Travel Film. A brick column is mostly bricks, separated by mortar. A high-school day is mostly lessons, separated by the journeys between classrooms, break and lunch.

A travel film is mostly sequences (usually filmed in one location), connected together by transitional shots.

What is a sequence?

A sequence is a short on-screen vignette about a person, a place, an experience or an event. It is usually shot over about an hour in essentially one location. Your edited sequences will be the essence of your finished show and MUST be interesting and/or relevant.

How do I film a sequence?

Like all skills, this is best learned with a ‘worked example’. Let’s imagine some ABRs are riding from London to Magadan and one of the bikes has a cracked frame in Tashkent, Uzbekistan. The team finds a back-street mechanic who is going to weld it up. We decide that this would make a good ‘sequence’ in our film. Here’s what we film: 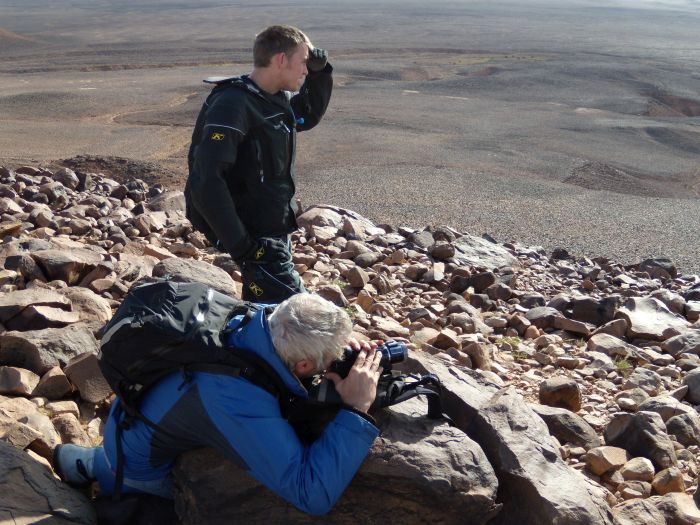 Back in England, when we get home, this sequence will ‘edit itself’. Like an Airfix model, all the pieces can be assembled without any stress. The final, edited sequence will start with the establisher, then go into a montage of all the detailed ‘tight’ shots then finish with the wide ‘finisher’. Over the top we’ll record some commentary filling in the gaps and telling a story that enhances the pictures. Seriously, that’s it!

What is a transitional?

A simple shot or series of shots that physically get us out of the last sequence and en route to the next sequence. It would be easy to say they are the ‘travelling shots’. However, there are many different types of shot that count as transitionals. Try and use them all at some point in the film. The classic ones are:

a) Never attempt to record the human voice if there is substantial background noise (traffic, music, wind etc).
b) Never use the built-in camera mic to record any human whose mouth is more than 1m from the camera.
c) Get the camera out of the wind if you want to use the sound, even a light breeze will ruin the audio.
d) Put proper headphones whilst recording the human voice. Then you’ll hear what the camera is recording rather than what your ears are hearing – amazingly, two totally different sounds!
e) Improvise wind gags – socks, knitwear, sponge.
f) Improvise windbreaks – even a diner plate is enough to create a wind shadow
g) Use a handheld mics – they look cool and revolutionises the sound quality. Experiment and practice with concealed mikes near the subject’s mouth. 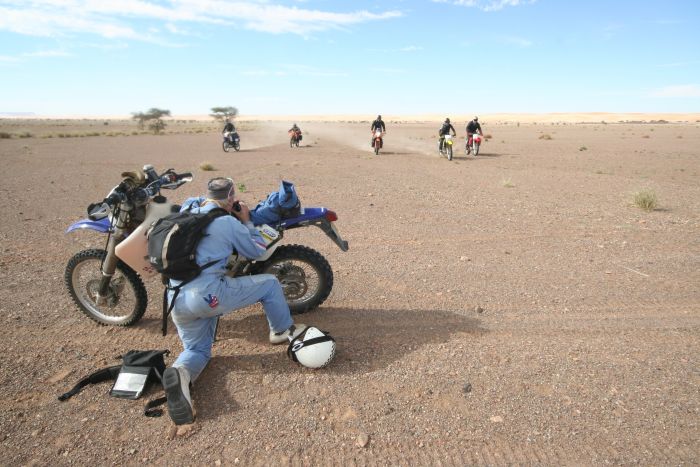 Every day, remember that your film must:

Making a watchable film is exactly like making a palatable meal. Both are almost impossible if you are clueless but neither really requires too much knowledge to be executed by a normal person without special training or equipment. You don’t have to be a professional chef to cook a decent meal and you don’t have to be a film-maker to shoot a decent film. In fact, there are similarities in the process of cooking spaghetti bolognese and making your own adventure film:

■ Deciding that you want to make a film is very similar to deciding you want to cook dinner. It doesn’t matter how expensive your worktops are or who made your saucepans, as long as you have the recipe, you can cook up a nice dish. In the same vein, making a good film is totally unconnected to the quality of your gear, it’s all about knowing what you’re going to do before you even start filming.

■ Providing you have a list of your ingredients then there’s a good chance that you’re going to be making a nice spaghetti bolognese, shooting all of the components you need for your documentary (sequences, transitionals etc.) will ensure you have all the ingredients to make a great film.

■ When you cook you taste the food as you go a long, if the dish is lacking anything or you need to change something up then you’re able to amend it before you serve it. It’s the same with editing your film. Continually review your piece. Better yet, show the unfinished versions to your friends and get their feedback! You wouldn’t want to serve a disgusting meal so why would you include a wobbly shot or one that was out of focus?

■ When your meal’s cooked you don’t just plonk it on the table and hope it goes down well. Serve it with a nice glass of wine, a lone rose, some candles perhaps, things that add to the experience. And when your film is finished, don’t just leave it in a folder on your computer. Why not present it really nicely? Maybe get some DVDs made, send a few copies off to film festivals and magazines? All the effort you put in will have been worthless if no-one actually sees your film!

■ If you can envisage using a three second shot of something, say, a weird roadside shrine, then shoot it for seven seconds. This allows you to dissolve into or out of it, much, much harder to do if you only actually shot two secs. Remember, the mantra: “If you want 3 then shoot 7”.

■ Anything shot with a ‘go-pro’ type ‘mounted’ cam should only be considered as of very limited value. Real TV shows are not made out of helmet cam footage!

■ Look for motion and film that, rather than moving the camera around. Only break this rule once you’re a competent camera operator.

■ NEVER speak from behind the camera, simply lay the voiceover down later.

■ Use bicycles and trolleys for smooth tracking shots, not cars and trains.

■ Film all disasters. They are a good time for emotional pieces to camera. It’s crucial that you film a PTC for anything that’s important to you, i.e. “we want a visa from the Iranian consulate here in Erzerum but are not sure if they’ll give it us. Here goes…”

■ Before filming – think where this shot is going to go in the final print.

■ If a shot isn’t perfect – it should NEVER go into the final print, so do it properly when you are on location!

■ Time lapse or speeded up sequences are good for: sunrise and sunsets, cloud formations, emphasising the hubbub of busy locations etc.

Mondo Enduro was conceived by Bournemouth railway clerk Gerald Vince back in 1992. However it was Gerald’s 25 year-old maths teacher kid brother, Austin, obsessed with super 8 cameras, The Banana Splits and Spaghetti Westerns that drove the film. He shot 21 hours of Hi-8 video (and an hour of ciné film) over the 14 months and 44 countries of Mondo and after much cajoling the Mondo Enduro series was screened 124 times and watched by 70 million people. The rest, as they say, is history…