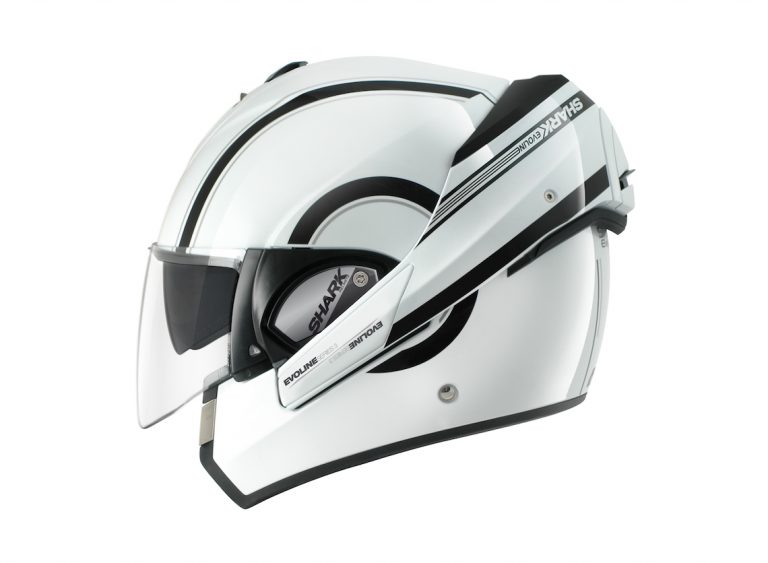 What is it? Third generation of the Evoline flip-front helmet from Shark 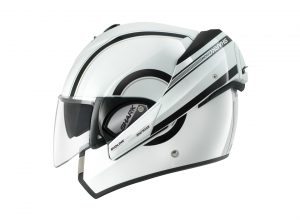 When I first reviewed the Shark Evo- line Series 2 a while ago, I really liked it because it has the capability to be two helmets in one: a full-face and an open-face jet-style. There are other flip-fronted lids on the market that have passed homologation testing and can be used in this way, but the thing that sets the Evoline apart is that the chin-bar actually revolves all the way over to the back of the helmet and locks in to place without affecting the overall aerodynamics of the lid, unlike many dual-wear flip-fronts.

I know that when Shark launched the original Evoline helmet, the company listened to feedback from its customers and soon made changes to the design, which were evident in the Series 2 model.

I’ve heard riders make negative comments on the weight of the Series 2 and the fact that the visor needs to be lifted to enable the raising of the chin-bar. Neither of these factors bothered me particularly, but we’re all different. On first look, there’s little visible difference between the Series 2 and 3 models, apart from new graphic designs on the shell. The sun visor operating tab is slightly larger and the side plates have a new design, too, but in essence the two helmets are virtually the same in appearance.

So, what are the differences? Firstly, Shark has shaved 200g off the overall weight of the helmet bringing it down to 1,715g for a medium-sized lid. The interior lining and cheek pads have also undergone a revamp, which makes the Series 3 a snugger fit than its predecessor.

The big difference between the S2 and S3 must have had Shark’s R&D department working over time, but it’s been worth it. The company’s now devised the chin-bar ‘Auto-up’ system, which means that the visor doesn’t need to be lifted to release the chin-bar.

In conclusion the Series 3 looks no different to earlier Evoline models, but the improvements have made it more user friendly, so it’s a win-win in my book! PJ

In a line: Shark listens and acts, how often can we say that?

What is it? An outdoor cover for your beloved steed 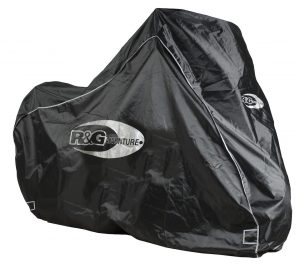 R&G Racing has been making farkles for motorcycles for a good few years, mostly aimed at the sports-bike owner. Included in its catalogue of items is a range of bike covers for indoor or outdoor use and the company has just released an outdoor cover aimed specifically at the adventure-bike owner.

I say this, because R&G has called it the ‘Adventure Bike Cover’, and to prove the point, has seen fit to emblazon the word ‘Adventure’ on the front and sides of the cover along with the company logo, so there’s no doubting what lies beneath it.

The cover is fully waterproof with silver reflective trim and logos, although the seams are not taped, so some moisture will no doubt penetrate over time. But as a cover for a large adventure bike, or tourer come to that, it fits the bill.

It fitted over my BMW R 1200 GSA with side panniers with ease, but it wouldn’t have gone over completely if the top box or other top luggage was fitted. Once on, it’s secured underneath the bike by two clip straps, which are adjustable. There are also cut-outs in the fabric to allow for front and rear security chain loops to be threaded through, making it easier to fit one if required.

In a Line: A cover for the cosseted adventure bike, just don’t leave it on the driveway for all to see

What is it? A water-resistant touring boot for the lady ABR 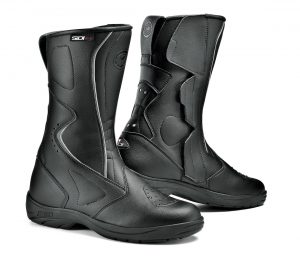 There’s rain and then there’s Welsh rain, and then again, there’s the kind of rain you get on the Brecon Beacons during the wettest summer since records began. After a whole three days of trying to learn to ride a motorcycle in this Biblical downpour, I reached saturation point. I seriously doubt I could have been much wetter if you’d turned a hosepipe on me. All of me, that is, except my feet.

When I first started shopping around for boots, the repressed goth in me rose to the fore and demanded I get a pair of Sidi Adventure Gores. Not only do these boots look the business, they also rate highly in the performance stakes. Although they’re technically unisex boots, the Adventures don’t come smaller than a UK size 8, though, and with my girly size 5.5 feet, there was no hope of filling them out.

Luckily, Sidi makes other high-quality performance boots which do accommodate the average-size female foot (and they aren’t all sodding pink either, thank god). Among these is the Livia Rain.

These calf-length boots are slim and understated, but that doesn’t mean they skimp on protection. Ankle supports run the length of the boot and there’s also padded protection on either side of the ankle, the outer of which is concealed within the boot lining; very smart. The shin pad is also fairly hefty and the heels and toes are equally well reinforced, with slip-proof rubberised gear-shift pads on the uppers. Reflective piping on the shin, ankle and back of the boot all add to the safety element, too.

If all this protection sounds a bit unforgiving, don’t worry. They’re also very comfy. I wore these boots day-in, day-out for a week without breaking them in beforehand – even walking to the local Tesco and back – and had no rubbing, pinching or numbness issues at all. The adjustable Velcro fasteners that cover the zip, coupled with an elasticated calf panel, mean you can get a nice secure fit without cutting off blood flow. There’s also a removable arch support, to help customise the boot to suit your foot shape, and half sizes are available.

The best feature of these boots, however, has got to be the weather-proofing. While the breathable Trokenfuss (antibacterial) inner helps wick away moister from the feet, the integral water-resistant liner helps keep out the wet. A generous rubberised gaiter runs the length of the boot’s opening behind the zip, eliminating any risk of leakage in this weak area. The upper is made from Lorica, a man-made synthetic favoured by Sidi, which is both abrasion and water resistant. It doesn’t take a lot of looking after either, so these boots will be good for several (wet) summers and winters to come. EJC

In a line: Once you put these on you’ll forget all about them – just what you want in a touring boot