Honda’s take on the (immediate) future of adventure bikes was presented at a recent press launch of the new Crosstourer. First impressions were a sleeker, cleaner, sportier-looking take on the adventure sector that’s so long been dominated by the bulbous, clunking bruiser that goes by the name of the BMW GS.

As the old saying goes, beauty is in the eye of the beholder, but BMW has the cash in the bank when it comes to having a look that sells. Which means that for some adventure riders the Crosstourer will be too neat and coiffured; more of a clean shirted halftime substitute than the grizzled veteran of a muddy first half. But it put enough sparkle in my eye to ensure the first date started off on a good footing.

The order of the day meant that for the first half of the test I’d be riding the Dual Clutch Transmission (DCT) version of the bike before swapping over to a standard, manual gear shift model for the return trip.

For DCT think of a twist-and-go scooter and essentially you’ve got it. However, that’s not the full story, as Honda has added a button on the right handlebar that lets you select Drive (D) or Sports (S) mode in automatic, or you can revert to full manual operation. On the left side of the handlebar you’ll find two paddle-style selectors for engaging gears, which can also be used as an override when in automatic mode. In addition, if you select automatic mode and then use the manual override – i.e. to go down the box quicker before a bend when you’re riding red mist style – the system will revert to automatic when it senses you’re back in sensible riding mode. Clever, eh? 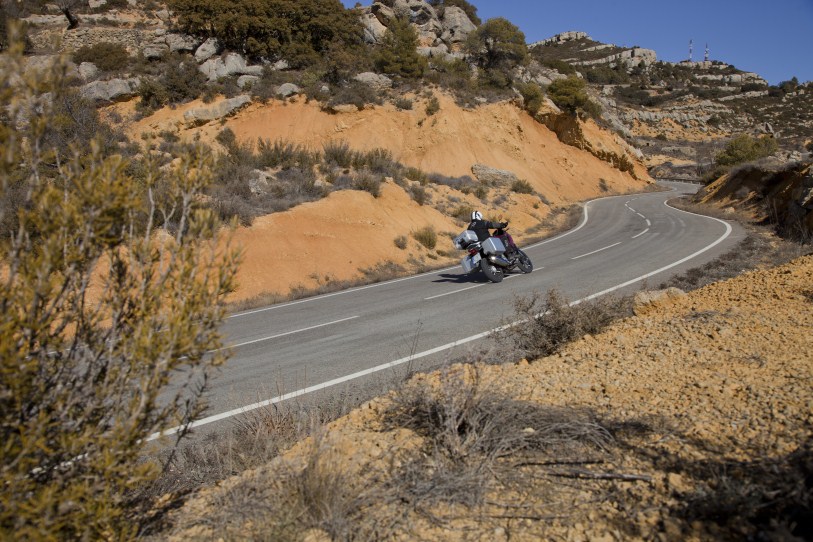 Before mounting the bike I thought I’d take a couple of pics, which if you’ll forgive me, I’ll not bother showing as they were close-ups of things that were not there – the clutch leaver and traditional gear shift. Once I’d finished snapping fresh air I slung my leg over and was pleasantly surprised by how well balanced the bike felt for such a heavy lump.

Weighing in at a 275kg curb weight (plus an extra 10kg for the DCT model) it certainly didn’t feel that heavy or in the least bit cumbersome. These two observations matched chief engineer Yosuke Hasegawa’s answer when I asked him, “What were your two biggest concerns when you were designing the bike?” He replied; “Weight and centre of gravity.” Have a pat on the back Yosuke.

Before moving on to the ride I’d better mention that the Crosstourer comes with ABS and traction control as standard and as the features were unobtrusive and efficient on the move that makes them effective in my book.

The road ride
A couple of streets from the hotel and we were on a motorway heading south with the sun on our backs and a blue sky overhead. From the off, the speed and power of the Crosstourer was never something that needed great contemplation. This is a very fast bike, period. It’s far quicker than any other adventure style machine I’ve ridden, though I’ve been reliably informed that the Ducati Multistrada is in a different league again.

As the pace picked up I began to wonder why Honda had bothered fitting the standard screen on the Crosstourer. For someone who’s 6ft 2in the main wind blast was smack bang mid helmet causing the Shoei adventure-style lid to tug skywards in a fashion that would have NASA on the phone asking for advice. In short, a Tesco bag Sellotaped to the front end would have been more effective and less intrusive, which means the ‘optional’ taller screen is far from being optional and pretty much essential for stress free motorway mileage. 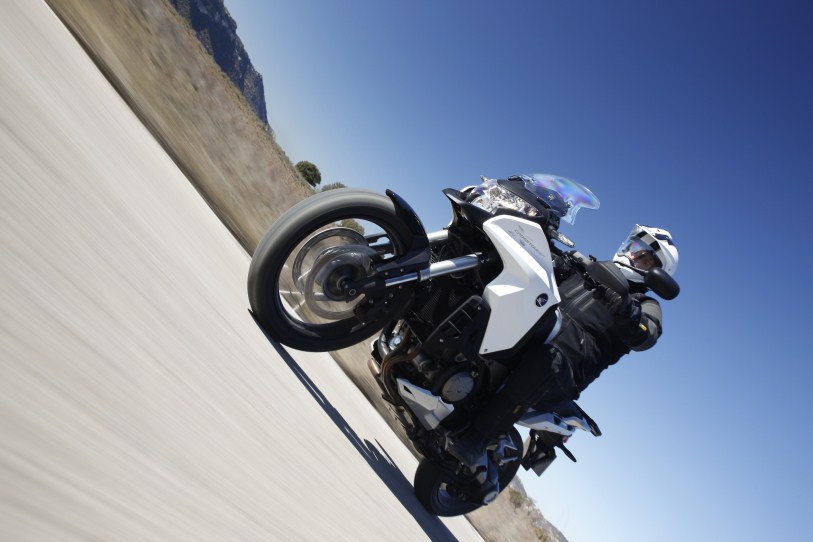 Other than the standard screen being next to useless, high speed motorway cruising on the Crosstourer is supremely effortless and it’s most definitely a bike for fast-paced big-mileage days. It’s reassuringly stable at high speed and the upright riding position is spot on for visibility and comfort, though at 6ft 2in I could have done with the pegs a little lower to reduce the angle of knee bend which by the end of the day was starting to tell.

Leaving the motorway we headed into the hills, flicked the auto from D to S (sports) mode and the pace leapt well to the north of spirited. For the next 30 minutes it was diving in and powering out of 180’s and tight 90’s while doffing my cap to the massive torque.

If Carlsberg were to tune a V4 engine for an adventure bike then the torque curve would be identical to that found on the Crosstourer. It’s superb: full on power from low down and it doesn’t drop through the mid or upper rev range. There’s no rev chasing with the Crosstourer and I don’t think I changed gear for the full half hour on those tight alpine-style roads; I just enjoyed the ride, immensely. 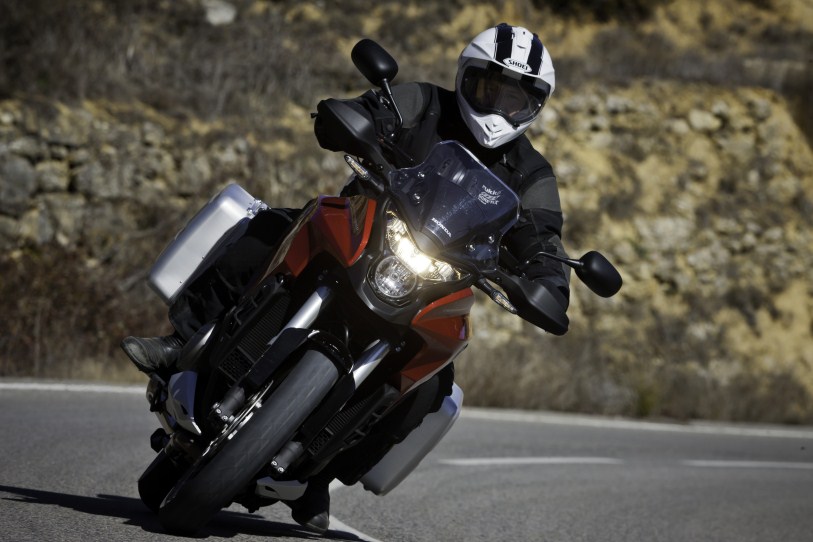 For a big, heavy, adventure-style bike the handing and stability on the twisties was impressive and I reckon it would be fair to say that not many would buy the Crosstourer and ride it at the sort of pace and aggressiveness that ours were put through on the launch test. I know I certainly wouldn’t. In short, if you’re looking for an adventure bike to blast around the Alps at a rate that would have you worrying all but the most accomplished locals on Blades and R1s, this bike will do it.

Dual clutch transmission
I have to say that after 35 years of riding motorcycles and having had gear and clutch lever operation embedded in my DNA the thought of riding a motorcycle without a clutch or gear lever was a little daunting. Two minutes into the test ride and I was convinced I’d seen the future.

Twist and go automatic operation is not new – it’s been around for years in various form and description – but the Honda DCT is a first for an out-of-the-box big capacity motorcycle. In short, I loved it. DCT suits my current motorcycle riding style – relaxed with an emphasis on observing my surroundings. I’ve little doubt that it’ll be a feature in my selection criteria for a motorcycle in the future. 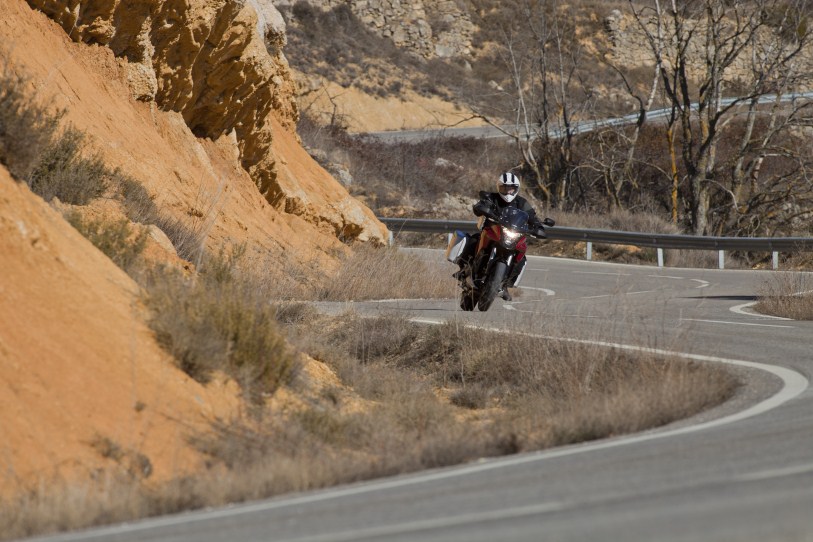 The manual version of the Crosstourer will always have traditional appeal and would be better suited to riders who prefer to push a bike to its very limits, and a little clutch slipping and feathering never goes amiss when taking a big bike off road.

There were a few riders on the launch who felt a little uncomfortable and fazed with the DCT automatically changing gear in situations where they would not have – such as changing up half way round a bend – but then that didn’t bother me. There’s no doubt that if I were buying a Crosstourer I’d go for the DCT, but I’d also sign up for the ‘optional’ gear change lever and have the best of both worlds.

Off road
Honda isn’t marketing the Crosstourer as an off-road bike. Indeed, from the information supplied by the company, no more than 10% of the design and build mix was aimed at conquering the rough stuff. And to back up the company line the official launch test opportunity to check out the off-road capability was limited to the short, flat, dusty drive to the lunchtime restaurant, a trail that would not have raised a sweat for a Goldwing riding novice. However, the misfortune of one test rider who binned his Crosstourer in a bush on a tight alpine bend offered the opportunity for a 45-minute play away from the tarmac during the time it took for him to recover and a replacement ride to be found… 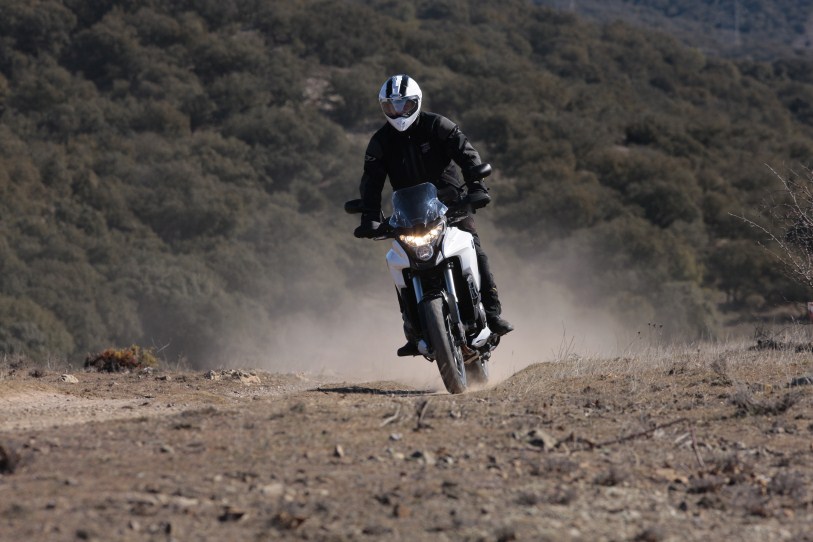 To dispel any misreading of what follows I’d better say up front that the Crosstourer and all bikes of comparative size and weight are going to be a handful off road and the rate of forward progress and the technicality of ground covered has as much (and maybe more) to do with the confidence and experience of the rider than the capabilities of the bike. Plus, this bike in its showroom condition has far too many exposed and breakable bits; Mr Touratech is probably salivating over his forward profit projections as I type.

Anyway, I took off down a hard, dry, rocky mountain trail with ruts and bumps a plenty and have to say the Crosstourer took it all in its stride. Turning off the trail and on to broken, rocky ground I headed down a steep bank with a couple of notable steps and once again the Crosstourer was steady, stable and performed well in all that I asked.

Next up was a slow section on uneven, stone-strewn, sloping ground, navigating through narrow gaps between trees and bushes which provided the biggest surprise of the lot. At slow speeds, on sloping uneven ground, the Crosstourer was far more balanced and stable than I’d expected and I was able to stand on the pegs and navigate through the maze of undergrowth at walking pace without taking a dab.

Top box and panniers
As someone who earns a living in the adventure bike sector the sentence that comes to mind when I think of the standard luggage is… what was Honda thinking? Both the panniers and top box are plastic dressed up to look aluminium-ish and I got the impression they’d bend if I scowled at them. In short, you can stick stuff in them and they open and close on the ignition key but it won’t be long before you’ll be splashing out on a decent set of after-market metal boxes. 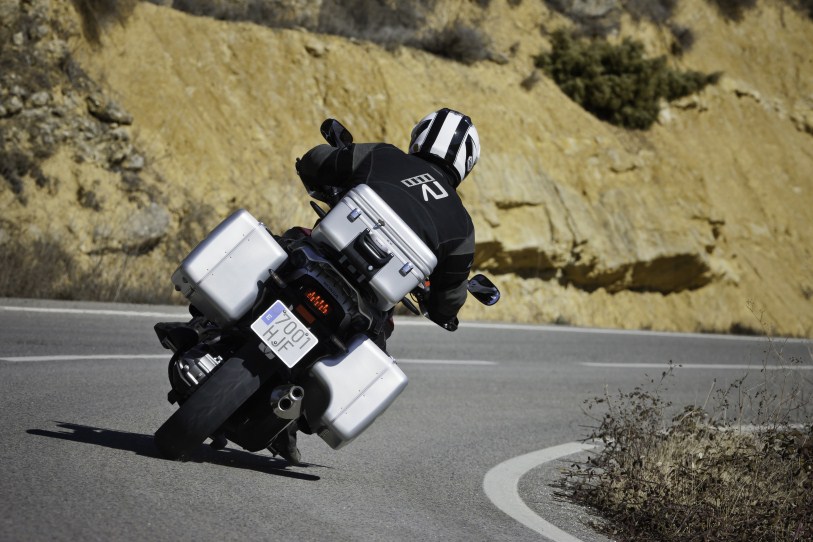 Tank range and fuel consumption
The tank is a reasonable 21.5L and the consensus over a pint after the ride was that we were averaging around 35mpg, which means a range of around 165 miles. I have to point out that these are not the official Honda figs and that it’s highly unlikely that anyone who buys a Crosstourer is going to ride it like they were ridden on test. That said, I’ve little doubt that the tank range will be a disincentive to some potential buyers.

Other stuff
You get spoked wheels which will take tubeless tyres.
The shaft drive and frame are the same as on the sports touring VFR1200F.
Seat height is 850mm.
It’s a great sounding bike with a low, almost Harley-esque burble.

Summary
Overall I liked the Crosstourer and with some aftermarket battle-proofing I’d certainly ride it anywhere I’m prepared to take my BMW GSA, though I’d probably take things a little slower. With a few mods, most notably the screen, it’s a first class road touring adventure bike with more than enough power and speed on tap, but the tank range is unlikely to please many.