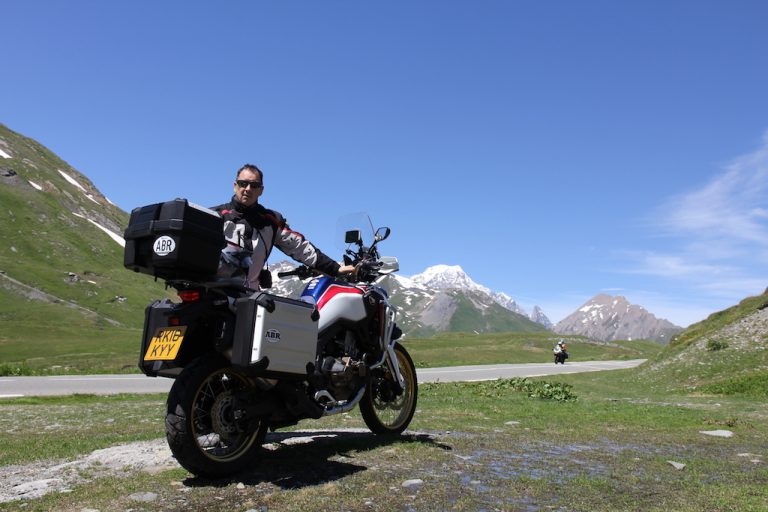 Its been an uneventful few months with the Africa Twin. However the headline events has to be riding to Lyon in France to see Wales Vs Portugal in the semi-finals of the European Cup followed by a couple of weeks exploring in the Alps.

The plan was to work our way from Grenoble up through France and Italy moving into Switzerland before crossing back into Italy en-route to the Dolomites. On the way we’d take in as many high, spectacular passes as possible and then check out the off-road opportunities whilst in the Dolomites. All in all, we covered around 3,000 fantastic miles and just about all on road and off-road conditions possible. Just the job to get to grips with the Honda.

Probably the main questions I get asked about the Africa Twin is: “what do you think of the DCT – Honda’s Dual Clutch Transmission?” In case you don’t know, DCT is Honda’s automatic clutch technology which turns the Africa Twin into a twist-and-go motorcycle.

The engineering, sensors and microchips take control of the gear changes you just twist the throttle and point it where you want to go – think automatic car and you’ve got it.

My view on the bike launch last December was one of positive enthusiasm with the provide that when pushed hard on Alpine type road conditions the ability of the technology to keep in step with a brisk riding place showed its limitations. In other words, if you’re gunning around tight twisting roads then the system changes gear where you might not. For example, the DCT could notch up a gear mid bend where you’d hang onto the lower gear.

Having had a couple of weeks riding Alpine roads on a daily basis my first view holds true. If the DCT has a downside then it’s going to be felt most by the rider who’s seriously pushing the bike at speeds in demanding conditions. If that sounds like how you spend most of your time in the saddle then the manual version is probably the way to go.

However, when ridden at moderate speeds on the same roads there is no downside to the DCT, in fact, quite the opposite where the technology kicks up and down at all the right moments.

One thing I would say though is the DCT when in D-Mode (standard drive mode) changes up far too quickly for my liking whereas when set to Sports Mode or the G-Mode (for off-road riding) they are spot on.

It’s also worth mentioning that the DCT comes with ‘gear paddles’ on the handlebars where you can manually change gear should you wish. It’s surprised me how quickly using my fingers to change gear became second nature on more spirited rides – just as with a traditional clutch and foot lever.

So, having spent time on the DCT would I change to the manual version? Not a chance.