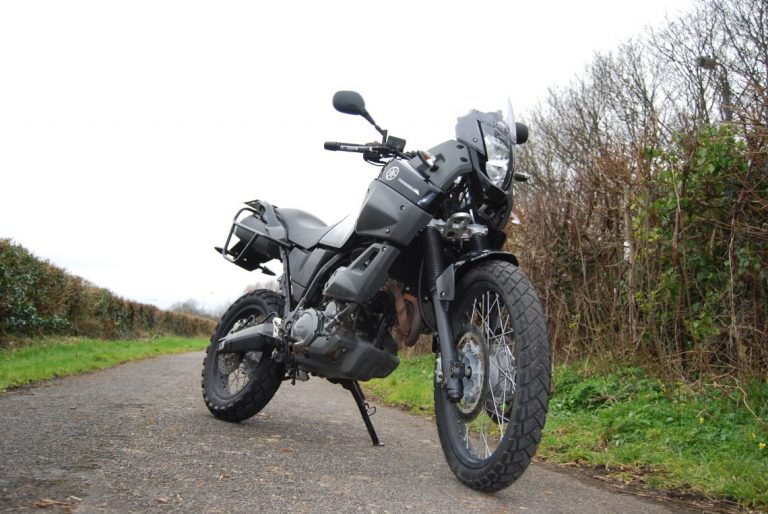 With the British leg of the Trans Euro Trail on the horizon, Julian Challis decides its time to move away from small capacity trail bike…

It seemed like a good plan. Buy an adventure bike, carry out some mild fettling, ride the British leg of the Trans Euro Trail and then maybe take on the Hard Alpi Tour in Italy. What’s not to like there?

First off I needed a bike and I suppose it’s time for a bit of a confession. Despite reading and following Adventure Bike Rider for many years, my experience of off-road riding on the more hefty fairies in the biking world had been pretty limited.

I’d done the Africa Twin thing for a couple of days over in Merthyr Tydfil with the Honda Adventure Centre, but beyond that, my off-road riding had been confined to the lightweight end of the spectrum starting from motocross bikes in my youth, to the current brace of KTM EXC250s in the garage. This was not in my comfort zone.

What to buy then? Well, I was pretty certain I didn’t want to head for anything too big or too expensive. Experience with the Honda had made it clear that bikes above 200kg were going to be too much of a handful on the tighter sections of the TET, and even if they weren’t, the price tags were still too much for the planned budget.

My head told me to go for the KTM 690 Enduro, but if I was going to embrace the whole adventure bike thing and take on a new riding challenge then simply buying the older sibling of my existing off-road bikes was a coward’s option.

So that’s why only a week after deciding on the plan I was piloting a rather shiny and well preserved 2011 Yamaha Ténéré from my local dealership. With only 9,000 on the clock, a useful selection of aftermarket add-ons and a cracking deal thanks to the fact I used to work at the dealers, pulling the trigger on the XT had been an easy decision.

It was big enough to take on extended mileage on the blacktop, tough enough to take on the off-road sections thanks to its well-documented off-road pedigree, and perhaps most importantly, I’d always liked the purposeful, praying mantis-like looks and stance of the Ténéré.

With Euro 4 regulations consigning the bike to history, then the last incarnation of the single-cylinder XT660Z has future classic written all over it.

With the bike back home in the garage and the first leg of the planned TET trip just a few short weeks away it was time to check over the Ten to ensure it was the man for the job. The previous owner had ditched the standard linkage in favour of a Lust Racing shortening link, which lopped two and a half centimetres off the seat height.

Now, I’m not short at 5ft 11in and a bit, but as the bike was still pretty damn high I was pleased to have the link in place. The XT also had the cheap-treat luxury of Oxford heated grips, which, bearing in mind it was one of the coldest winters on record, was going to prove a godsend.

On the luggage front, there was a set of SW Motech soft panniers and fitted racks, and a goodsized baseplate rack at the rear of the bike suitable for a top box or more soft luggage.

To get the bike ready for the first trip and further adventures I wanted to just add things that made sense, made the bike either easier to ride or better protected and also wouldn’t break the bank. Internet searches on what modifications I should make revealed a bewildering and exhaustive list of ways to upgrade the bike and at the same time completely drain the family finances.

Some people are almost evangelical about the bike, but to my mind if you are going to spend upwards of five grand on upgrading a bike, you’ve either bought the wrong bike or have far too much cash…

The tyres were the obvious place to start as the fitted Metzeler Tourances were far too road biased to offer much off-road confidence. With the myriad of tyres on offer in the adventure sector I took a stab at the Mitas E09s as a suitable starting point, so a swift call to Classic Enduro in Bristol had the hoops on their way.

While waiting, there was time to address the obvious shortcomings in the Ténéré’s footpeg provision. How Yamaha released the bike with these badly designed, poorly made and inadequate lumps is a complete mystery, so a few moments with the spanners saw them in the bin quick sharp.

As a replacement, a set of pegs I’d taken off one of the KTMs a few years back looked favourite, and after a few moments with the grind wheel and a flashover with the rattle can they bolted pretty much straight on. The improvement to the grip was instantaneous, making the bike feel like you could actually use it on the rough stuff. Perfect. If the feet were now happy, then the hands were the next stop.

As with virtually every standard Japanese bike, the Yamaha comes equipped with hideously long levers that are just plain nasty to use off-road, so they had to go. A cheap and cheerful set of adjustable span levers were ordered and arrived all the way from the Orient in just eight days, fitting straight on in a matter of minutes.

There’s a lot of forum sniping about Chinese parts, but faced with well-made components for cheap prices, I’m in. Just about every list on Ténéré mods mentions the need to uprate the suspension, and as it’s ridiculously soft on stock settings you can see there is certainly some room for improvement.

But without trying what was there on the trails, I was reticent to jump into this course of action. For the short term, the preload at both ends was increased by a fair amount, which served to stiffen things up without compromising the ability to soak up big hits.

Whether this will be enough remains to be seen. The final addition for the first trip was a USB port to power up the iPhone and allow us to follow the GPX route of the TET that we would be riding.

Although I could have spent time poring over the wiring loom to work out which wires to tap into, I simply ran the wires from the inside of the front fairing, underneath the tank and straight to the battery. To hold the phone, I already had a spare RAM mount which, with a bit of packing, went straight onto the handy bar that runs over the Ténéré’s clocks.

Another eBay foray sourced a waterproof case for less than a tenner and with a bit of drilling and bolting the phone was suitably placed, blocking out the largely superfluous tacho and clearly visible on the fly.

So, with the stage one mods done and the bike a bit more suitably prepared, the TET trip went well, with nearly 500 miles notched up on a fantastic mix of trails, gravel roads, tight single track, flooded byways and somewhat surprisingly, a fair few very extended sections of tarmac.

The near Artic conditions in January didn’t exactly help the Yamaha at times, most notably highlighting that the tyres, most notably the front Mitas, were nowhere near grippy enough for slippery mud over frozen ground.

What was also evident was the need to protect the Ténéré from almost inevitable offs that come with the territory of off-road and adventure bikes. I wouldn’t dream of riding my EXC without decent handguards, engine protection and a decent metal sump guard, so those are top of the list alongside the new rubber.

OK, so I actually did stay upright for the entire trip and the plug ugly Yamaha sump guard did the job of keeping the stones at bay, but moving forward I want to get the protection in place before I need it.

Next up is a new chain and sprocket set – after the trip the chain was pretty much shot so I’m running a spare non-O-ring chain in the interim, but for more off-road, a decent X or O version is on the list.

On the control front, the brake lines are parts bin ugly and soft so they could use an upgrade to braided, and if I’m fitting new handguards, some new bars that don’t have the stock profile would make things more comfortable and easier when stood up.