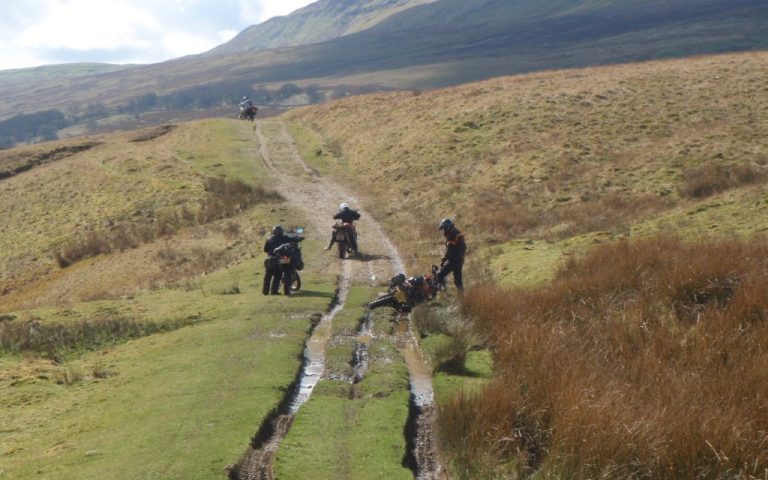 ABR’s resident green lane expert Mike Beddows tackles two great trails, one in the Peak District, the other in the lakes. 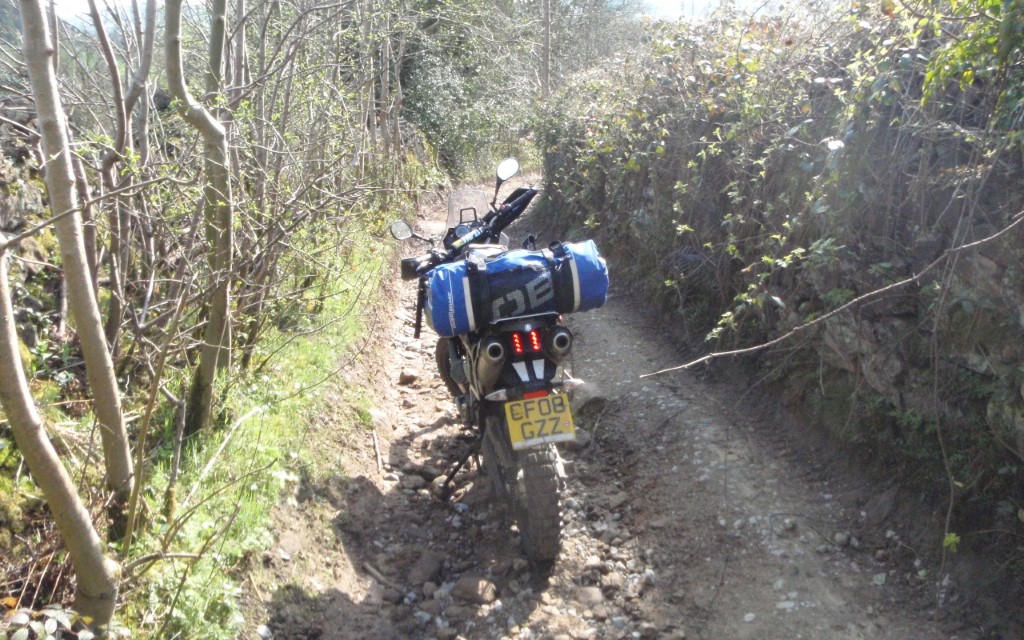 These trails start close to the picturesque market town of Bakewell and you have to pass through Chatsworth House grounds between them. The trail ends at Two Dales which is only a couple of miles North of Matlock Bath, a fantastic place to be on a Sunday where hoards of riders meet on all manner of bikes. Take care on the surrounding roads as the A6 running through Matlock is a very popular biking road, and the police are normally out in force at weekends. The trails are not difficult except the last downhill section towards Two Dales. More experienced riders will enjoy the trail in reverse. It is an achievement to ride to the top without stopping or dabbing as you go up the route, starting at Two Dales. 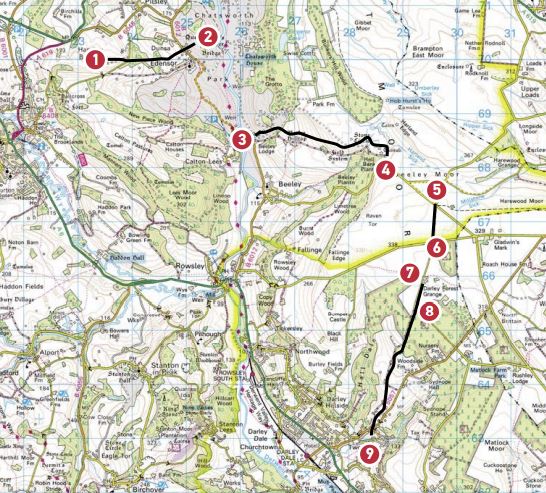 1-2
The first trail is fairly straightforward and follows a farm access trail with a solid stone base which may be muddy in the wet. There are some rutty sections but these should not trouble anyone. The trail leads down to the very picturesque village of Edensor.

2-3
Turn right out of Edensor and head through Chatsworth Park. Keep an eye out for the large herd of red deer. Once you leave Chatsworth grounds and pass over the single width bridge over the River Derwent, take the next left turn and proceed to the start of the next trail.

3-4
Take it steady past the farm buildings. The trail starts with a solid base but will be very muddy in the wet. Some sections are rutted. As you proceed you will hit a graded section of hard gravel/stone and head slightly uphill. Proceed round a right-hand bend and the trail becomes flatter. There are puddles approx. 1 foot deep, and I would expect a lot of them in the wet (I did the trails after a period of dry weather). This trail is very popular with walkers and it is not uncommon to see an ice cream van parked in the layby at the end, along with several cars.

5-6
This is an easy section, an old broken tarmac road with lots of puddles and rough ground, it shouldn’t trouble anyone.

On the map this section appears as a ‘yellow’ road, but in fact it is actually a trail. This starts off graded as it goes through some trees. It then heads sharply downhill and the grading ends. Take care, in dry this will be a grade two trail, in the wet definitely a three. Proceed carefully past the farm. At the farm the trail turns into Tarmac.

7-8
On to the tarmac, as the road bends to the left turn right into the trail.

8-9
This trail starts easy as a broken tarmac road. At the buildings on the right the trail changes. There is a large gully to the right and a high bank to the left. You have no choice but to drop into the gully (I’ve been here in the rain and the gully is like a torrent of water).

The descent takes you over lots of loose, fist-sized rocks, with the addition of a large rock step section to bounce down. The trail here is fairly narrow, continue to the houses where you should take care as you pass.

This is not the easiest of sections though I have been down and up on a KTM 950 ADV so it is possible on any adventure bike, however, it’s not a beginner trail. If you approach the trail from the opposite side the trail is difficult to spot as it is not signposted. 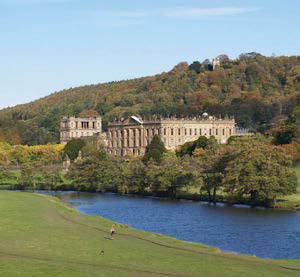 Chatsworth House is a stately home in Derbyshire, England. It is in the Derbyshire Dales, about 3.5 miles (5.6 km) north-east of Bakewell and it’s the seat of the Duke of Devonshire and has been home to the Cavendish family since 1549.

Chatsworth’s park covers about 1,000 acres (4.0 km2) and is open to the public free of charge all year-round, except for the southeast section, known as the Old Park, which is not open since it is used for breeding by the herds of red and fallow deer. Other farm stock also graze in the park, many of which belong to tenant farmers or smallholders who use the park for summer grazing.

These 2 trails are located close to the market town of Kirkby Stephen, the home of the ABR Boil Rally at Takoda Camping. Three other trails have previously been documented in earlier editions of ABR. These, along with this month’s trails can form the base of a day trail trip from Kirkby Stephen. First, issue 13 detailed Winton Ford just north of Takoda. Then ride to this month’s trails.

Once complete head over to issue 21 where “The Highway” is documented. From here head into Hawes and there is a good long byway (Roman road) just south of the town which can easily be found on a local OS map. This leads to the final trail detailed in issue 20, Stalling Busk. Putting these trails together in one ride will take a few hours to complete, and a bit more homework on other trails in the area will lead to a very good day’s trail riding in some fantastic surroundings. 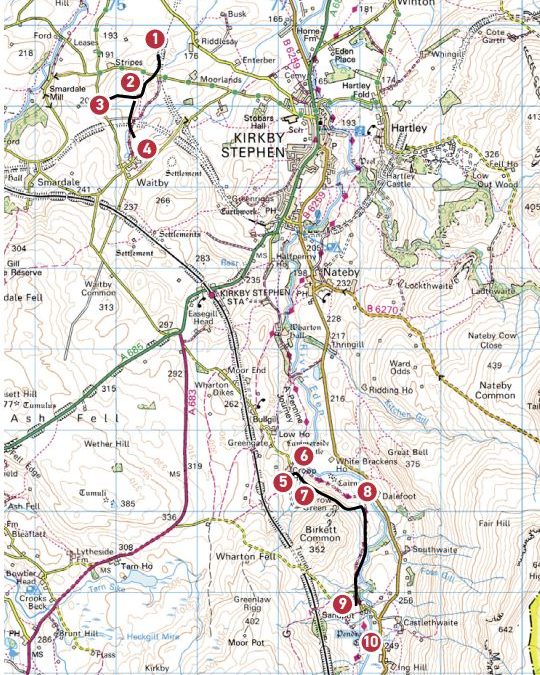 1-2
The trail starts immediately on the left after a beige house. It’s a farm access track for its length. It’s a mix of hard, compact, shallow (and sometimes muddy) ruts. There are walls either side with a few trees to ride under. Generally, there are just two ruts a vehicle width apart. The centre is overgrown with grass. Continue to the junction where the trail splits.

2-3
Continuing straight on will lead to the road. There is a large puddle to splash through, which isn’t deep and should cause no issues.

3-4
This section is slightly easier and proceeds towards a farm. There are plenty more puddles to splash through and the trail is more graded. Proceed to the farm where this trail ends. Turn right to leave the farm.

4-5
Tarmac section. Take care when crossing the A685 as it can be a busy, fast road. Proceed down the “no through road” turning (signposted Wharton). Take it steady when you see a sign saying “Dogs in kennels”. When we rode down, there were two dogs chained up on either side of the single track road and it was quiet daunting to ride with them stood in the middle of the road barking at us. Luckily, they did not bite. As you approach the end of the tarmac you can see the trail heading off into the distance in front of you. Turn left before you reach the final houses. 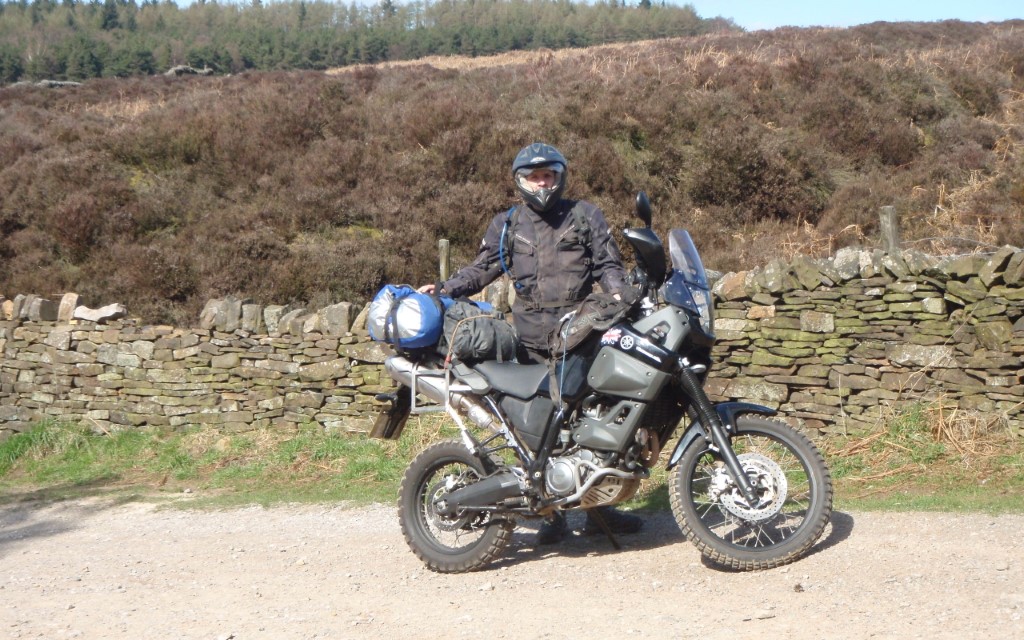 5-6
Ride down the track until you reach a gate. There was another dog loose here but all he did was bark and follow me to the gate.

6-7
Proceed through the gate and this is where this trail becomes very muddy and slippery. There is a small “byway” sign on the gate (just so you don’t take the wrong Bridleway which heads off in a different direction). Proceed downhill to a small concrete bridge. The views to the river on the left and ahead to the hills are fantastic giving a real sense of remoteness.

Continue past the bridge and the trail is still very muddy and slippery. There are shallow ruts which, once in, are not easy to get back out of. Take care. Try not to use your front brake much as if it locks the front wheel you will go down with the bike (I did!). There are a few puddles to go through, nothing major.

8-9
Make sure you head right at this point. There are small byway markers pointing you right, which is the right direction. The trail now becomes less rutted, and more grassy. It is so easy to lose traction here. More muddy shallow ruts follow. The views down to the river are great. Towards the end, the trail becomes easier, and you can just proceed to the tarmac road.

9-10
Head down the single track road to the castle. Pendragon. There is a sign for red squirrels so it’s worth keeping your eyes peeled for them in the area! 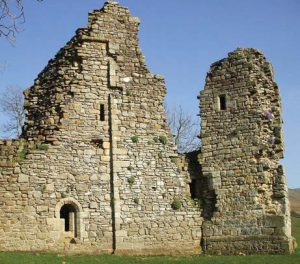 According to legend Pendragon castle was built by Uther Pendragon, father of King Arthur, who is said to have unsuccessfully tried to divert the river to feed its moat. However, despite legend (and the discovery of a Roman coin), there is no evidence of any pre-Norman use of this site. The castle was built in the 12th century by Ranulph de Meschines, during the reign of King William Rufus.

It has the remains of a Norman keep, with the later addition of a 14th-century garderobe turret, and some further additions in the 17th century. The castle is privately owned and on farmland. Public access to the site has been suspended due to the condition of the castle walls, however, a sign attached to the entrance indicates that remedial work will be carried out and public access restored eventually