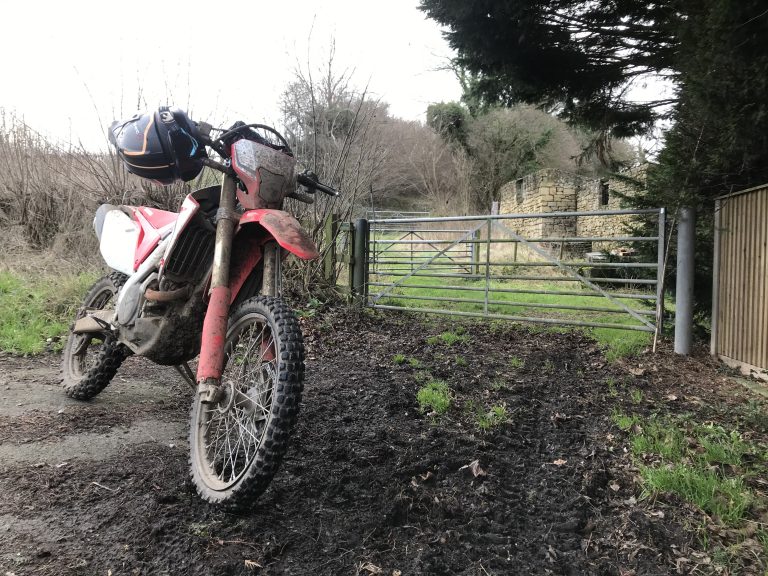 With my former long-term test bike, the KTM 690 Enduro R returned to sender, there was a bike shaped space in the garage that needed filling. And, I’m happy to report that almost seamlessly it’s been filled with a sparkly red CRF450L which looks be the ideal replacement to allow me to continue my exploration of the tracks and trails of the UK, and hopefully beyond. 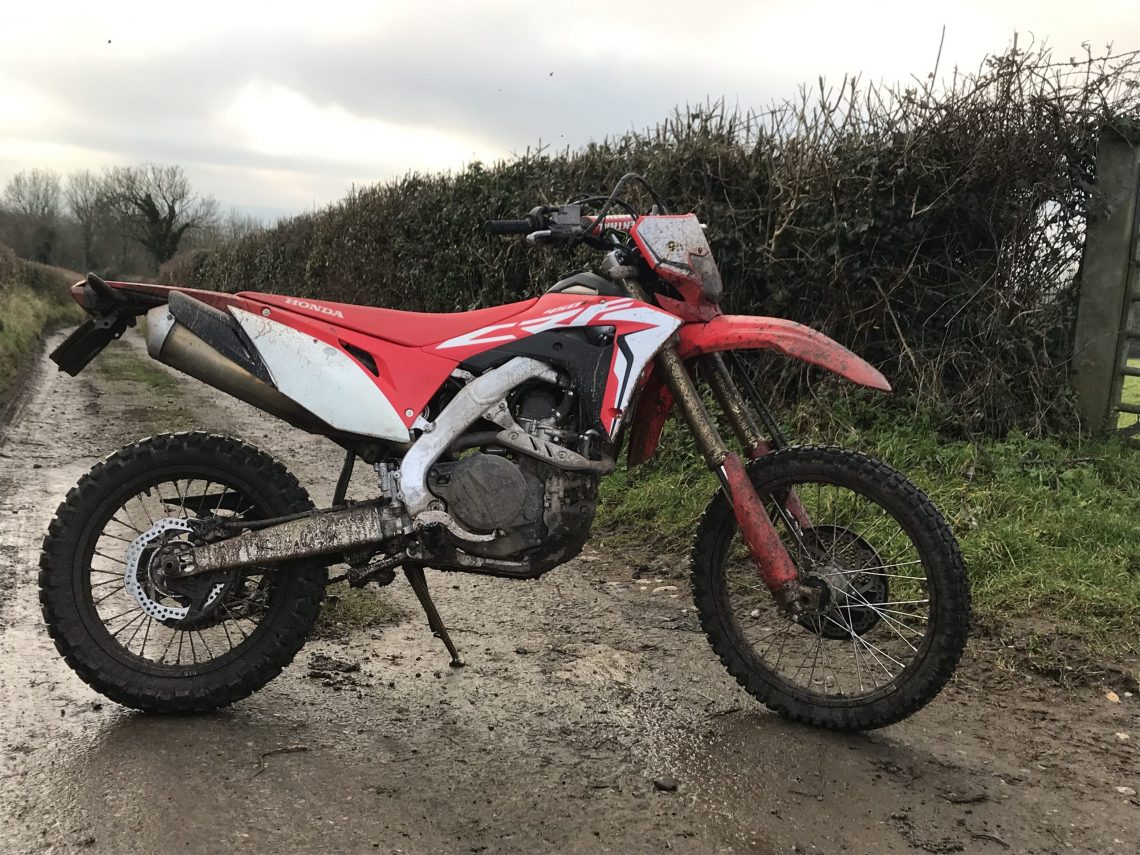 An upgrade on the Honda CRF250L?

When the production of the 450L was first announced by Honda last year, there was a certain excitement as to the potential of the new bike.

Its younger sibling, the CRF250L has proved to be a popular bike among the green laning and small adventure bike community, with buyers loving its cheap purchase price, tiny running costs and huge service intervals. The hopes were that the 450L would offer much the same, but with a more powerful motor to help it better handle bigger distances.

But when the specification and the price for the 450L were released, it seemed that the expectations of the market were along way away from what Honda had been thinking. Far from an uprated version of the 250L, the new 450 was far more like a reined in version of the existing enduro bike, the 450X.

There was no sign of the cheap and cheerful steel frame and low-tech motor, no sign of the tiny running costs thanks to recommended oil changes around every 600 miles, and as for the price – this bike was north of £9,000.

And in a sense, this disconnect between expectation and reality – which was largely beyond Honda’s control or indeed making – overshadowed the bike’s launch at the Dave Thorpe Honda Off-Road Centre last year. 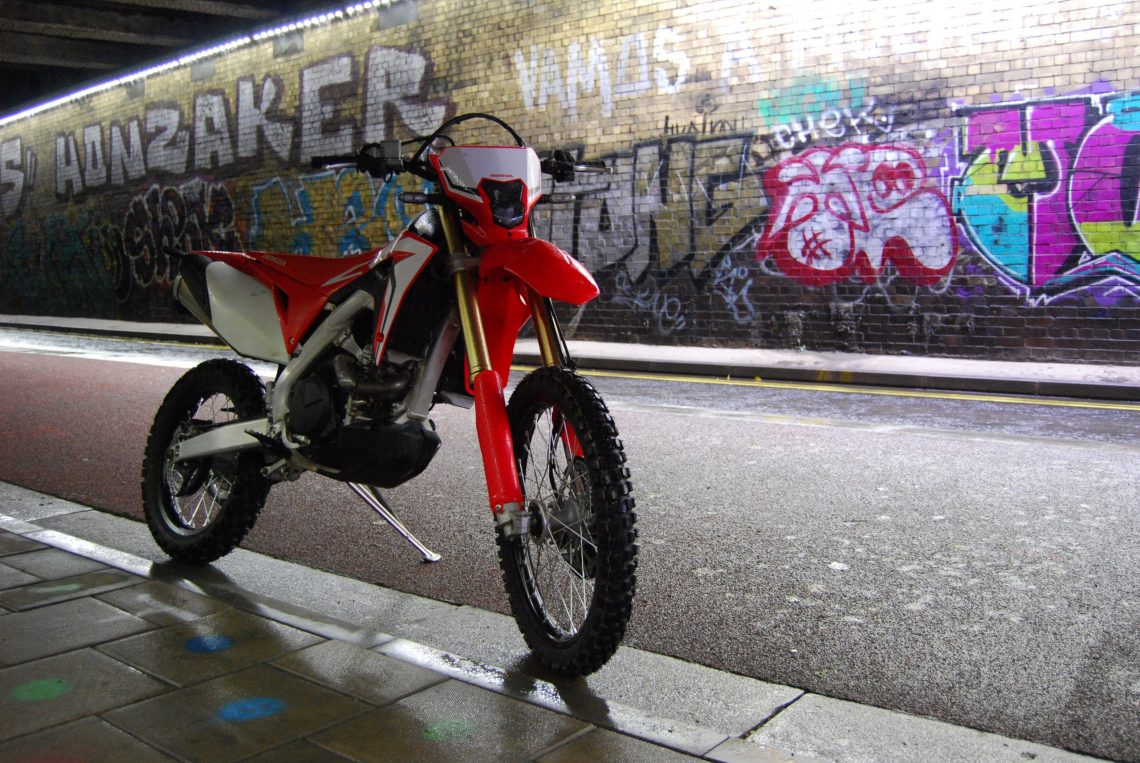 All who rode the bike were unanimously enthusiastic

I unfortunately missed the event as I was marooned on a Greek island by a Mediterranean hurricane, but all that attended and rode the bike were unanimously enthusiastic about how enjoyable the new 450L actually was. Yes, the peak horsepower was artificially low to meet the somewhat Draconian Euro 4 regulations, but with oodles of torque, competent suspension and a frame lifted straight out of the MXGP championship-winning bike, the 450L was a great package, albeit an expensive one.

We got an extended chance to try the 450L at the rather fantastic ABR Festival in July. Honda loaned us a box-fresh machine for the duration of the event, and as I’d been appointed travelling marshall, safety officer and stinky bog monitor on the Adventure Trail, I got to spend a good deal of time with Big Red. And I have to say I was mightily impressed too.

The CRF had the potential to be a perfect year-round trail bike, and with a bit of fettling, a cracking lightweight adventure bike. And with talk of a US spec ECU that effectively doubled the power, I would have been happy to take it home there and then.

So, six months later and thanks to a chance conversation with the estimable Mr Thorpe on the Africa Twin launch in Sardinia, I headed down to Fowlers of Bristol to collect my new squeeze just in time for Christmas. The weather might have taken a decidedly Arctic turn, but after grabbing a few gritty urban snaps to keep ABR Editor Bryn and Assistant Editor James happy, I was straight out onto the rough stuff to start as I meant to go on.

On the cards I’ve got the Great Western Trail, a cross Pennine adventure, North Wales, South Devon. This bike is going to get some serious use and abuse. Bring it on! 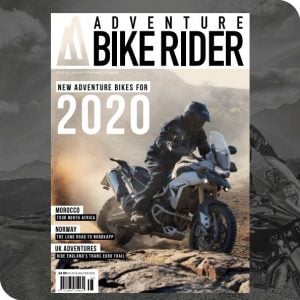 The Best Heated Motorcycle Gear To Keep You Warm In Winter

Crossing Mongolia on a dirt bike