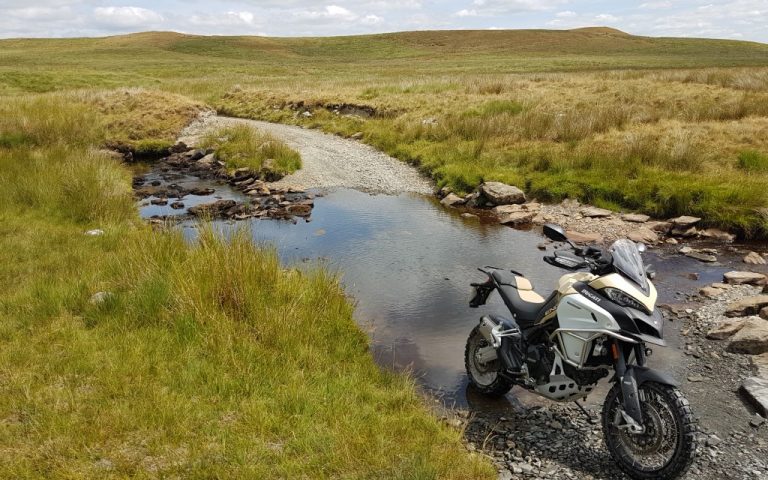 Alun Davies takes advantage of the recent drought by taking the Enduro Pro down the Strata Florida.

Over the past couple of years, I’ve found that late-evening map reading sessions coupled with a hefty glass of wine are a very fertile environment for coming up with magnificent, game-changing motorcycling ideas.

Equally so, I find the morning following a late-night map inquisition a wonderful time of sober enlightenment, during which most of the previous night’s game changers are consigned to the ‘must stop drinking wine’ folder. However, every now and then, a little gem of an idea still sparks in the cool morning air and, given a few puffs of energy, develops into something that actually carries water as a good idea.

For example, just the other night I was studying Ordnance Survey Maps within a radius of 100 miles of Stratford upon Avon trying to find new green lane routes to test out the Enduro Pro. At the same time, Mrs Davies poked her head around the corner and proclaimed that it hadn’t rained for six weeks.

Why she felt it best to enlighten me with precipitation statistics at that particular time I do not know, but I do remember thinking a couple of things: one, it’s been great not having to cut the grass twice a week. Two, I wonder if I could do the Strata Florida on the Ducati tomorrow?

The Strata Florida is a famous green lane in Mid Wales that cuts across the high mountains from the ruins of the Cistercian Abbey of Strata Florida near the village of Pontrhydfendigaid to a remote single-track tarmac road following the contours of the beautiful Irfon Valley to the south-west.

The trail is famous for its stunning location and history, but probably more so for the challenging conditions which include rock steps, deep mud and standing water, plus multiple river crossings where, given the right conditions, it’s possible to lose a Land Rover let alone a motorcycle.

In normal conditions, I wouldn’t dream of taking a Ducati Multistrada Enduro Pro along such a trail, especially when riding solo.

The thought of dropping the bike in one of the deep and unstable river crossings or being bogged up to the axles in mud with no help on hand is not exactly a great idea for a good day out.

However, with six weeks of little to no rain, the thought occurred to me that it was now or never. And so, it was now.

On the ride over I kept reminding myself that the Enduro Pro is a tall and heavy machine where delicate little dabs are unlikely to be the precursor to anything other than an expensive topple over.

I’d decided that if I saw testing ground up ahead I’d stop, walk it through, remount and take it at a speed better defined as confident rather than tentative. Momentum was the key.

Over the past few months (and issues) I’ve been nothing but complimentary about the ability of the Enduro Pro and following a day out on the challenging Strata Florida trail my enthusiasm for the Ducati has grown again.

In reality, a bike of this size has no right to be on the Strata Florida and when you consider I managed to clean the trail with not a single moment of drama, it is a stunning endorsement of the machine. In the next issue of ABR, I’ll be writing an extended review of the Pro based on my experience over this past year, including more on the Strata Florida and how it performs on tarmac.

Just a little word of warning, the Strata Florida is a huge test for a big adventure bike and the rider. If you’re not absolutely sure of your ability and the conditions on trail, then it’s very likely that my ‘great idea’ will not be so great for you. At the very least it’s a far better idea to take along some company.