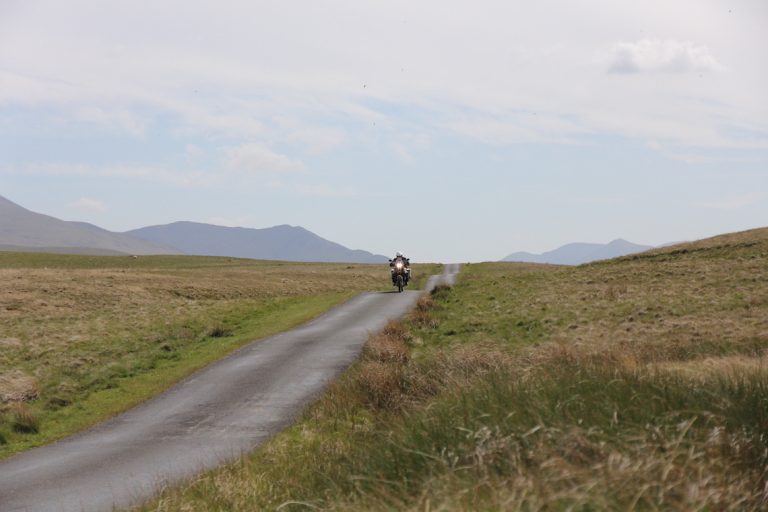 The beauty of the Lake District has been the source of inspiration for many writers and poets over the years, and fortunately, there’s a footpath that travels through its heart. Bryn Davies rides the Cumbria Way 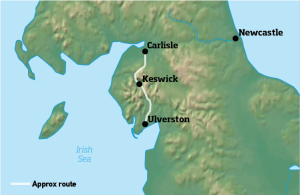 If you have followed the previous instalments of Great Britain you’ll remember the Coleridge Way from issue 27 of Adventure Bike Rider, the footpath which was inspired by, and named after Samuel Coleridge snakes its way through Somerset and the North Devon coastline, areas that demonstrate perfectly just how magnificent our island is.

While the Coleridge Way follows the footsteps of Samuel, it was the Cumbria Way, which slices the Lake District in half, that I was to follow for this issue.

Throughout history, the beauty and charm of the Lakes have inspired writers and poets to pen some of their most famous verses, and a notable mention must go out to William Wordsworth, with whom Coleridge set about founding England’s Romantic Movement when they produced a collection of poems entitled Lyrical Ballads.

While Lyrical Ballads was written when the pair lived in Somerset, it was in the valleys and on the shores of the Lake District that Wordsworth spent most of his life. Such was the allure of the area that he described Grasmere, the town in which he spent most of his older years, as ‘the loveliest spot man hath ever found’. As I rode through the pretty little town on a fine summer’s evening I couldn’t help but think the same to myself.

By riding in the shadow of the Cumbria Way, a 95-mile long footpath that stretches from Ullswater in the south of the Lakes to Carlisle on the northern boundary, I had travelled through some of the most pleasurable scenery I could ever hope to from the saddle of a bike.

To quote Wordsworth again, when writing about the mountains in the area; ‘in the combinations which they make, towering above each other, or lifting themselves in ridges like the waves of a tumultuous sea, and in the beauty and variety of their surfaces and colours, they are surpassed by none’. If you truly need convincing that Britain is, in fact, great, then travel no further than the Lake District.

While the Cumbria Way is typically trekked from south to north, it was on the cobbled streets of Carlisle that my journey began, on the doorstep of the dainty but wonderful Cathedral Church of the Holy and Undivided Trinity, England’s second smallest ancient cathedral (the smallest being Oxford’s Christ Church).

The smell of freshly baked biscuits lingers in the air, a pleasant by-product of the nearby McVities factory, as I made my way out of the city and towards Dalston, the unsightly housing estates, which Wordsworth would no doubt describe as an eyesore, are quickly forgotten as you soon catch a glimpse of the fells on the horizon, offering a promise of what’s to come.

Travelling towards Gaitsgill you’re presented with your first opportunity to ride one of the many green lanes that follow closely to the Cumbria Way. The lane begins as a farm access track but quickly becomes overgrown, and in summer we were riding through deep ruts that were camouflaged by pannier-high grass.

The green lane deposits you near Gaitsgill Farm and from here you can plug Caldbeck into your SatNav and let it guide you through the rolling hills and peaceful hamlets of the countryside, I lost count of the amount of times I passed a house and thought to myself ‘I’d love to live there’.

Caldbeck, which sits on the very edge of the Lakes, is the birthplace of the infamous huntsman, John Peel, and it is here that the Cumbria Way forks into two, one path taking the ‘high route’ over the 658m peak of High Pike, the other skirting the Caldbeck Fells, rounding Skiddaw before joining the high route again in Keswick.

While it’s impossible to follow the route over High Pike on a motorcycle, the roads and, more specifically, the views as you ride along Caldbeck Common are astonishing. It’s amazing that this area of the Lake District, despite its striking beauty, is so scarcely visited, with tourists preferring to congregate further south.

Riding off the common ground and around Skiddaw you eventually emerge alongside your first body of water, Bassenthwaite Lake.

With the sparkling blue water to your right and the fells dominating your left, it’s just a short ride down the A591 before you’re in Keswick.

It is here that I recommend you stop for a bite to eat at the Filling Station Cafe (CA12 5PP), where you’ll get great service and even better food.

After filling up with food and coffee, riders are presented with three routes if they wish to follow the Cumbria Way, each with its own charm and temptation. Our route heads south-east, skirting the shores of Thirlmere, while those looking to knock off some of Britain’s most enticing passes, Honister, Wrynrose and Hardknott, will want to head either south along Derwent Water, or west towards Loweswater – these two routes are described in more detail in the box out below.

The A591 out of Keswick may be slightly busier than the roads we’ve followed so far, but it’s no less exciting. The tarmac is smooth and tidy and, after climbing out of town, you drop into a fantastic valley, flanked on both sides by imposing fells that embody everything that Wordsworth loved about this area. The riding is so good as you skirt Derwent Water that it’s tempting to stay on the A591 but at Town Head our route turns off to the right and we ride for a while in the shadow of Helm Crag.

After a short while, we reach Grasmere, the town that was once home to William Wordsworth and is now his resting place. The poet lived here from 1799 in Dove Cottage, unfortunately, he passed before he was able to taste one of the fine delicacies of the area, Grasmere Gingerbread, from the aptly named Grasmere Gingerbread Shop, that’s still baked with the original ‘secret’ recipe from 150 years ago.

After exploring the town head on to Elterwater, a small village in the valley of Great Langdale which, once again, is a place of real British beauty. The Cumbria Way footpath bisects the village and from here a brilliant network of trails runs for a few miles south, offering some fantastic riding.

Those who are uncomfortable on loose rocks will want to stick to the road, but if you like a challenge and want to test out your sump guard there is fun to be had. A tasty ford crossing at Little Langdale was one of the highlights of the route as we were egged on by a family who were out enjoying the sunshine.

Whether you choose the green lanes or not, you’ll eventually find yourself in Hawkshead, a township that was originally owned by the monks of Furness Abbey. Author of The Tale of Peter Rabbit, Beatrix Potter, once lived nearby, and she too was inspired by the charming Lakes.

Heading south we reach Town Head on the northern tip of Coniston Water, a lake that was formed by glaciation in the last ice age. The lake was also the scene of many attempts to break the world water speed record, its five-mile length providing a great staging ground for the speedsters of the early 20th Century.

In 1966 Donald Campbell attempted to smash previous speed records in a Bluebird K7, a turbo jet-engined hydroplane, he achieved a speed of over 320 miles per hour but unfortunately lost control of the boat and crashed, Campbell dying on impact and Bluebird sinking rapidly. It wasn’t until 2001 that the remains of the Bluebird were recovered, and later that year, Campbell’s body.

Setting speed records will be the last thing on your mind, however, as you skirt the east coast of Coniston Water. The east coast is the less travelled side of the lake, the popular tourist town of Coniston sitting on the west, and every now and again the opportunity presents itself for you to park up and dip your feet in the cool water. It’s the perfect spot to relax as the Old Man of Coniston stands proudly to the northwest, watching over you.

Once you’ve made it to the southern tip of Coniston Water you’re then on the last stage of the ride to Ulverston and a quick blast down the A5084, and then the A5092, will see you finishing on the coast of Morecambe Bay, looking out over Britain’s largest expanse of intertidal mudflats and sand where the tide can woosh in at an instant.

Take a moment to contemplate the 70-mile ride you have completed and the area that you have ridden through. If there is ever one route that will convince you that you don’t need to head off to foreign lands if you want to ride amazing roads in fantastic, inspiring scenery, then the Cumbria Way is it.

If you ride the route we’d love to hear from you, get in touch at [email protected]