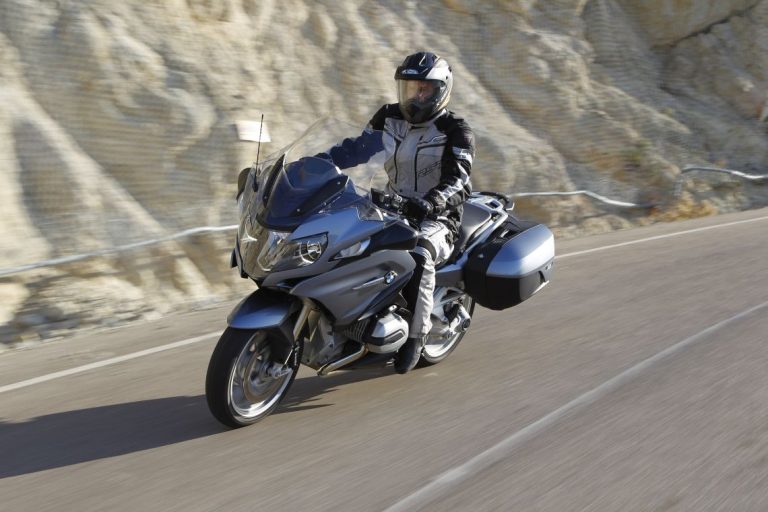 Do you really need an adventure bike, when a tourer will do?

The launch of the new GSA gave us chance to ride the all-new RT, a bike now using the same partially water-cooled engine as found in the GSA, still with 124bhp, the same assortment of riding modes, but in a touring format that might just prove favorable to those doing a majority of motorway miles.

It’s certainly a very different bike to the GSA – obviously – with it not until you reacquaint yourself with a touring bike that you realise (or remember) just how different they are to ride. Gone are the high rise bars and lofty riding position. You’re back down inside the bike, the big mass of the fairing and instrument cluster feeling heavy by comparison to the GS Adventure.

On top of the LE spec, the test bikes were also fitted with the £365 Dynamic Package, including, amongst other things, the new Hill Start Control; effectively a ‘fly-off brake’ for assisted hill starts. Finally, the bike came with the £1,050 audio system (external speakers allowing you and the rest of the world to listen to music on the move), bringing the test bike in the pictures to a grand total of £16,600, just a few hundred pounds shy of the fully-equipped GSA on the previous page.

What strikes you most about the RT is just how advanced/futuristic it feels. The adjustable screen is electronic, rising and falling smoothly, the colour display is hi-tech, with everything adjusted using a roller wheel on the left handlebar control. Then the music pumping out through the speakers, with Bluetooth connectivity, a myriad of cubby holes and those central locking panniers. It really is a tour de force, especially with the optional electronic suspension. 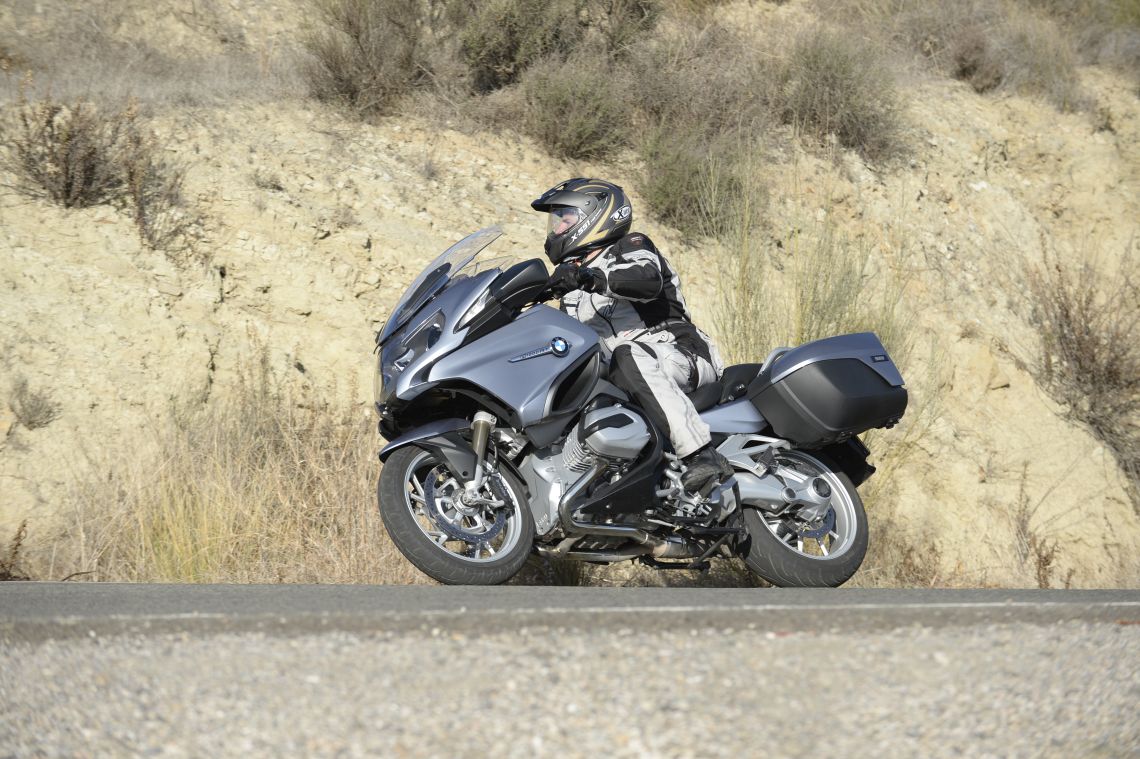 Certainly, for anyone upgrading from the old RT, the biggest change will be the technology underlying the bike, not just the standard Rain and Road modes (adjusting throttle response and stability control, plus the damping if the D-ESA option is fitted, as it was on this bike), but also the engine, which, as we’ve found on the GS, is a big improvement in terms of performance over the old air-cooled engine. In the RT the engine feels more than its 124bhp suggests. It certainly feels fast enough, with the RT now a viable option for anyone not wanting, or needing the weight (295kg) or power (160bhp) of the K-series powered K1600 GT.

By comparison, the new RT weighs 274kg, but doesn’t feel too big or unwieldy at crawling speeds. In fact, with the seat height of just 805mm – with even lower options available – the bike is easy to paddle around. Certainly easier than a tall adventure bike, especially if the panniers are fully loaded.

I can’t say as I was particularly bowled over by the assisted gear shift. It’s to allow clutchless up and down shifts, but wasn’t always seamless. The Hill Start Control function was probably more useful. You activated it with a squeeze of the front brake lever when stationary, engaging a fly-off brake that disengages when you pull away. The system also disengages when you turn off the ignition (best not to forget), and it does take a few extra revs to get it to disengage when you pull away. Perhaps practicing your hill starts might be a better idea.

In the corners, and whilst the RT is obviously not as agile or competent as the NineT or GSA, it was pretty decent, in a syrupy, flowing sort of way, especially with the electronic suspension set to ‘hard,’ meaning minimal roll in the corners, and almost no pitch or dive under acceleration or breaking.

As expected, it was on the motorway that the bike really came into its own. With the screen fully elevated, you could barely feel an ounce of wind blast or turbulence. Serene. Smooth. With the bike so planted and confident. By comparison, it did make the big adventure bikes look like the elevated, multipurpose tool they have increasingly become. 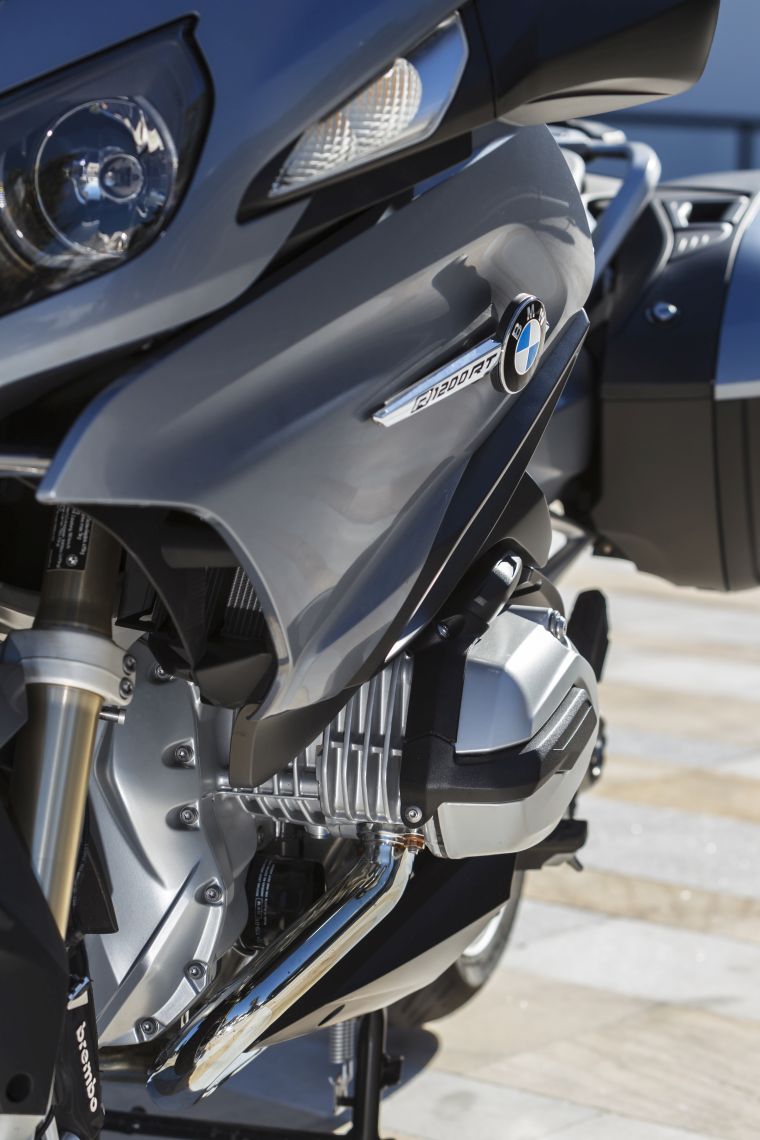 All in all then it makes for an interesting comparison going from the king of adventure bikes (GSA) to the king of touring bikes (RT). Obviously, you wouldn’t be in a hurry to take the RT off -road, and it’s nowhere near as much fun as the GSA on these tight and twisty roads of Southern Spain, but it does serve as a (necessary) reminder of just how competent the modern wave of tourers now are.

For those riders who may have switched to adventure bikes having grown tired of the stodgy, joyless touring bikes of old, but who now fancy something a little lower, and perhaps ultimately more suitable for two-week European touring, then this new RT really could prove something of a revelation. It’s certainly worth a shot.

How versatile is the RT?

As an ‘adventure bike’, obviously not as versatile as the GSA; but as a touring bike it’ll do everything you need it to do.

A long distance commuter perhaps. You might find it a touch too heavy and cumbersome for city streets.

Ideal for heading off somewhere two-up, with plenty of space in the central locking panniers, and guaranteed to be comfortable over long distances.

As an off -roader?

Again, this would be the RT in its element, and perhaps the reason we’ve included this bike in the first place. For that annual two-up, two week trip into Europe, this is arguably the better bike than the GS Adventure.

Stranger things have happened. Peter and Kay Forwood for example have travelled to every country on their Harley Davidson tourer, so anything is possible.

As a pillion carrier?

Again, the RT comes into its own. It just has a very different image to the GSA, with it possibly up to the pillion rider to decide which of the two they prefer. The adventure look, or the touring look.