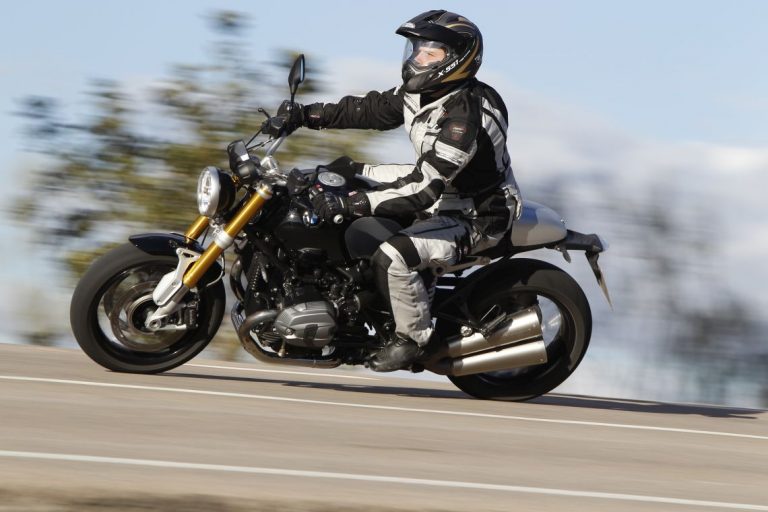 If adventure is the purest expression of freedom, then what better bike to do it on than this…

It has to be said that of all the bikes on test in Spain (the GSA, the RT and the NineT) it was this one the assembled journalists were looking forward to riding the most. In the flesh the bike is stunning to look at, and the details superb.

Little things, like the BMW logo in the centre point of the headlight, or the alloy struts holding the mudguard off the front wheel. Or the exposed aluminium tank, hand crafted in-house, along with all the other bits of aluminium scattered around the bike, such as the air intake guards. Then there’s the noise when you fire it into life; the old 1170cc DOHC air-cooled engine from the previous generation GS providing the sound, and the propulsion. In this NineT however it somehow feels more liberating, more monstrous, certainly more powerful.

Then there’s riding it, which is everything you hoped it would be and more. It’s easier to ride, more comfortable, quicker and handles better than you’d ever imagine it to do, with a sharp, hunkered-down feel about it, especially in the long sweeping corners. 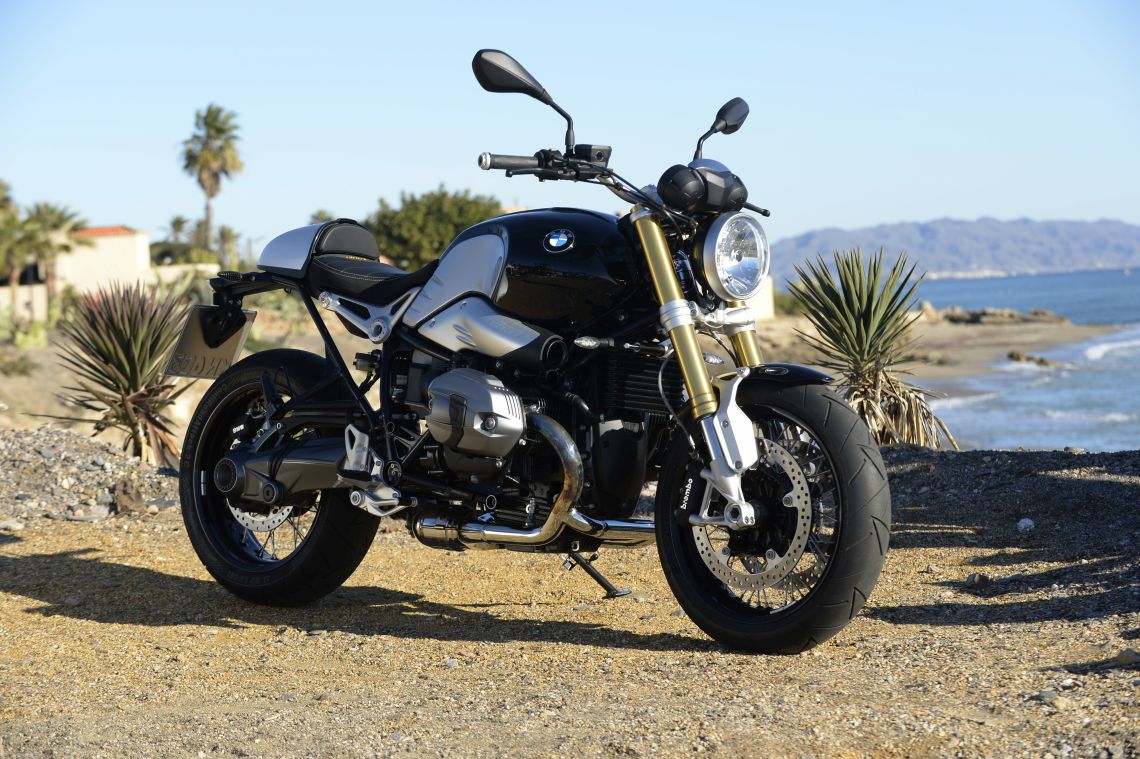 And then out on to the road, the bike taut, the ride firm, but not too firm, the engine muscular and building in power as the revs rise towards the 8,500rpm redline. It ‘only’ develops 110bhp, but it certainly feels a lot more. It’s the midrange; that real guttural slug of the midrange, mated to the angry sound, which pops and bangs on the overrun into a corner.  e bike’s got character, bags of character, which is easy to see why when you meet the guy responsible for building it.

Roland Stocker isn’t your typical looking BMW designer. He sports a ponytail, facial hair and dark glasses. He rides Harley Davidsons and is big into his custom bikes. He was the perfect man, then, to be given this bike as his pet project.

Compared to other bikes, the NineT (named to celebrate ninety years of BMW Motorrad) was developed quickly, in just two years, using many of the main components already lying around; the engine for example (from the old GS), the swingarm and spoked wheels from a R1200R, the brakes from the new GS, the front forks from the S1000RR sports bike, minus the adjustability.

It allowed Roland to be able to focus on the details, and craft a bike that in the flesh holds your attention like few others. That it rides well to boot is a double triumph, and I goad him into fitting it with scrambler bars and knobbly tyres, and giving us the NineT Scrambler. He smiles at this, to suggest he’s already thought of it. Only time will tell.

One of the features Roland is most proud of is that from the outset the NineT has been designed to appeal to bike customisers and modifiers. The rear subframe for example can be completely removed (including the number plate) leaving just a bobber seat. The aftermarket Akrapovic exhaust has been designed to allow installation in two different positions, and Roland is encouraging of people to go away and customise this bike in any which way they want to. Whether people will or not is another matter. But he hopes. 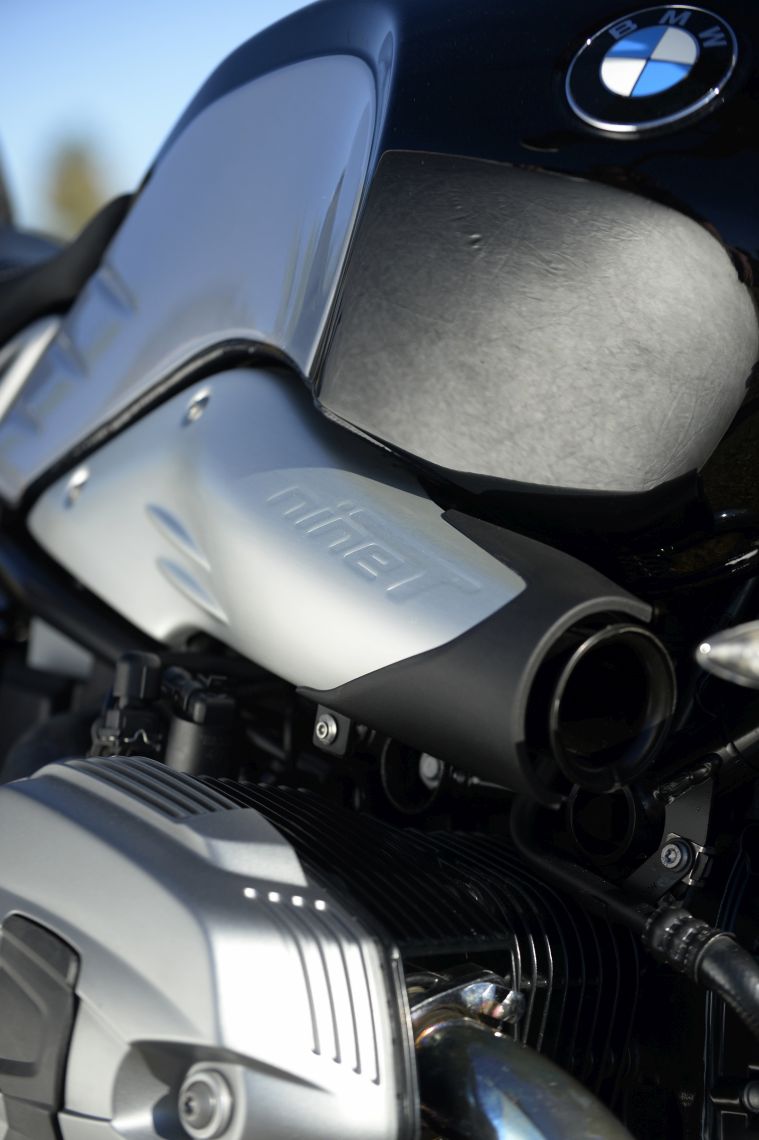 What proved interesting for us, in riding the NineT, is that it’s a proper back to basics bike, the kind that people used to ‘adventure’ on.  e technology is simple (only ABS), the materials – bar the aluminium tank – are nothing exotic or difficult to fix out on the open road.

When I mentioned to BMW officials just how ‘ideal’ it would be to somehow attach a set of throw-over leather saddlebags and head off on some wild adventure, they almost had a fit. ” It isn’t a bike built for ‘adventure’, it’s a cafe racer, built to pose on and cafe race on,” they sort of told me, in marketing speak.

I would argue no, it’s not built for that, it is instead a bike built for riding, and the whole point of adventure is that it’s not about the bike, or the kit, or the farkles as they’ve become so annoyingly called, it’s about getting out there and riding, however far you happen to ride, whether it’s around the world or just down to the shops. And I know, for sure, that if I had the NineT in the garage I’d probably ride it every excuse I had. I’d probably make up excuses, just to go out and ride it. And that’s what motorcycling should be about, encouraging the act of riding, and this bike does it better than any bike I’ve ridden for a long time. Clearly I’m not alone, as the first allocation of bikes – due this spring – have already been sold, so if you want one, call your dealer pronto. Just be sure to save one for me.

How versatile is the NineT?

BMW markets the bike as a cafe racer, but the NineT is capable of so much more. A long stretch to the bars the only compromise for those with short arms.

The coolest commuter on the North Circular.

BMW is offering a tank bag and tail pack for the bike, which would certainly give you enough storage space for a long weekend away.

As an off -roader?

Perhaps not in its current guise, but with a bit of fettling it could well be, though certainly not the tricky stuff , and damaging the hand-crafted aluminium tank would surely make you wince.

It was comfortable after three hours in the saddle, so there’s nothing to say it couldn’t be done, especially with an Airhawk or sheepskin cover.

It would be as perfect, and as imperfect as any other bike, but would certainly make for a great experience, riding the roads of India or Thailand on something like this. Or Route 66.

As a pillion carrier?

A pillion option is available, with separate pillion pegs to be fitted. We didn’t get to test this.