Rose Crompton·27th April 2021
May/June 2014 - Issue 22
Sometimes it's the crazy stuff that's done with motorbikes that really gets the pulse racing. Rose Crompton rounds up some interesting biker stats and facts...

Sometimes it’s the crazy stuff that’s done with motorbikes that really gets the pulse racing. Rose Crompton rounds up some interesting biker stats and facts…

The longest… continual ride by a team

Back in 2003, Simon and Lisa Thomas decided to leave their lives in the UK behind and embark on a round the world trip. Turns out, they didn’t want to circumnavigate the world only once though.

It currently stands as an unofficial world record for the longest motorbike journey made by a team, probably unofficial because they’re still going.

There isn’t much they haven’t seen either: they’ve travelled to the most northerly and southerly points of the earth, accessible to a BMW R1150GS and F650GS and crossed the Sahara, but their trip hasn’t been without its dramas.

They’ve suffered several bouts of malaria and Simon survived a near-fatal accident deep in the Amazon rainforest when he and his bike fell headlong from a rotting bridge.

It was three weeks after the accident before he found the medical help he needed and discovered he’d broken his neck.

Did that put the team off? Hell no! The journey continues, see it all at 2RideTheWorld.com, or read the interview on page 56 of this issue. 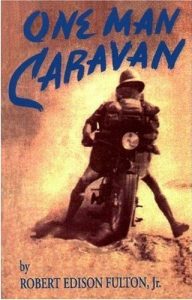 In 1932, 23-year old Robert Fulton Jnr was given a motorbike and a camera and asked to go on a 25,000-mile solo trip from London to Japan. His film, Twice Upon A Caravan shows a Middle East culture, still influenced by British rule.

Fulton is now over 90 years old and reflects on his journey in the film Twice Upon A Caravan while still sitting on his original twin-cylinder Douglas motorcycle! Wonder if Mr McGregor will still have his aged 90?

A trip of a lifetime was nearly ruined when the adventure rider discovered that his Kawasaki KLR650 had been stolen. Martin Williams had ridden across Australia – where he lives – headed to South Korea and crossed parts of Europe including Russia without any problems.

In total he’d covered 16,000 miles, before parking up on a family member’s drive-in Swansea for Christmas, thinking his machine would be safer here than anywhere else on his trip so far. Turns out, it wasn’t.

Some toe-rag nicked it and nearly ruined Martin’s ambitions to see the world on two-wheels. “I couldn’t believe my eyes. I found the chain cut and my luggage thrown on the ground with no sign of the bike,” he told one national newspaper.

Luckily, Martin was reunited with his bike after a dog walker found it ditched in a nearby forest.

Some damage had been done to the bike, taking a couple of weeks to repair, though thankfully Martin did manage to complete his RTW trip together with his original vehicle companion. Phew!