Crazy motorcycle stats that will make your pulse race with fear, excitement or downright bewilderment 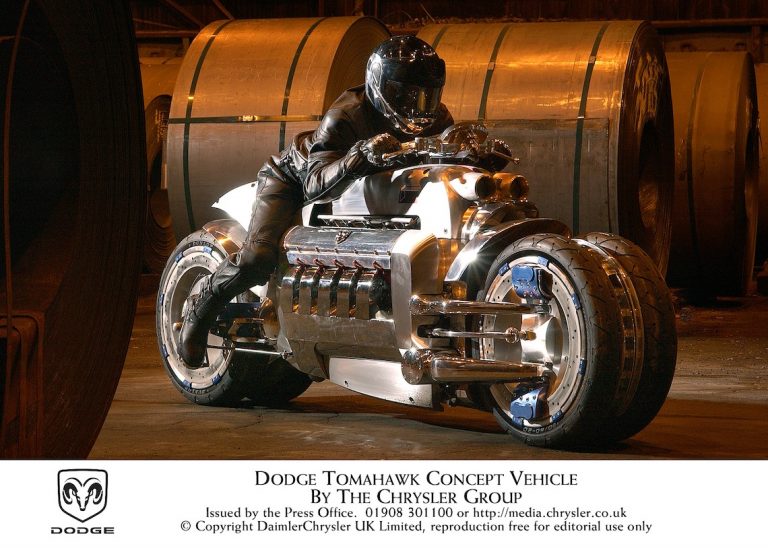 The future of motorcycling is here! Well, maybe. Forget about weaving in and out of traffic, how does flying over it sound? An amateur inventor from Australia has devised the world’s first flying motorcycle. Christopher Malloy built the ‘Hoverbike’ in his garage, using his life savings to fund the project. If you’ve ever seen Star Wars: Return of the Jedi, think back to the scene where Princess Leia and Luke Skywalker are shooting through the forest on a Speeder Bike and that’s pretty much what the Hoverbike looks like.

While the bike has yet to be fully tested (so far it’s only been used while leashed a few meters off the ground) and is still in prototype stage, Malloy reckons it’ll be capable of speeds over 100mph and altitudes of 10,000ft (3,000m) – that’s almost three times as high as Wale’s highest mountain, Snowdon.

Chris is hoping that outback farmers around Australia will warm to the idea of using the Hoverbike to help them control cattle on large ranches, whether they’ll warm to the price tag of £30,000 is yet to be seen but, frankly, I can’t think of anything else I’d rather spend my money on!

Before he got in to inventing flying motorcycles, Chris was a helicopter pilot. Riding the Hoverbike is apparently similar to piloting a helicopter, which is handy because what ABR doesn’t know how to fly a chopper?! Fortunately, though, the Hoverbike will be classed an ultralite, so no piloting licence is necessary to be able to use one – phew! 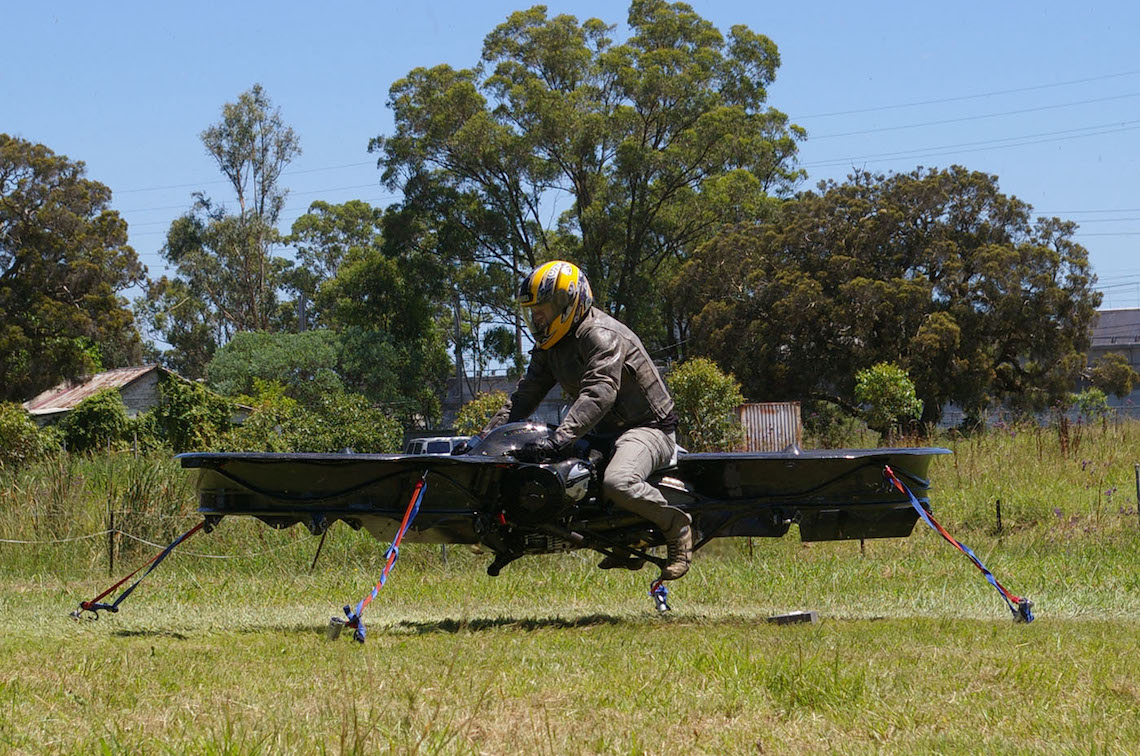 Questions have arisen about the safety of such a thing; for a start, what happens if the bike rolls over while you’re on it? What happens if you lose power at 10,000ft? But these problems have apparently been taken into consideration with the inclusion of two parachutes for the bike and one for the rider. Better pack a pillion chute, too, though, or SWMBO’s unlikely to okay that 30-grand loan!

The most… expensive motorcycle in the world

If the thought of emptying your bank account to buy a GS with all the bling scares you stiff then prepare to be shocked to the core at how much people have shelled out for the world’s most expensive motorcycle.

You do get a hell of a lot of bike for your buck, though. The Dodge Tomahawk V10 Superbike is fitted with a 500 horsepower 8.3 litre V10 SRT engine (the same one used in a Dodge Viper) capable of 0-60 in 2.5 seconds and an estimated top speed of up to 420mph. (Dodge declined to have the top speed tested. Spoilsports.) 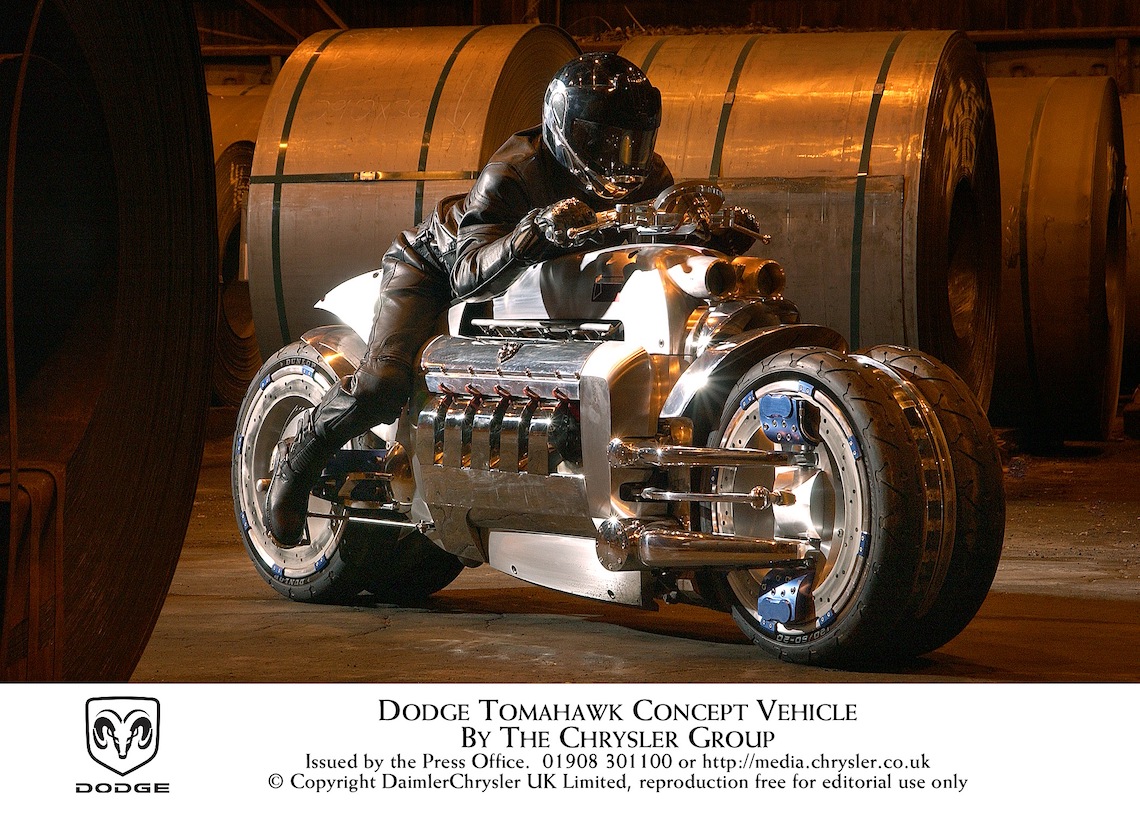 Strictly speaking the Tomahawk V10 isn’t actually a motorcycle as it has four wheels which rotate individually, but it looks like a bike and it’s called a Superbike, so we’ll allow it passage in to the ABR Blow Your Mind hall of fame.

Unfortunately the bikes aren’t street legal as they don’t have any lights and, let’s face it, they’re a bit ridiculous. Dodge emphasises that the Tomahawk is intended as a ‘rolling sculpture’, and not meant to be ridden. Err, Okay then. Up to nine of these stupidly expensive ‘rolling sculptures’ have been sold so far, presumably to people with an eye for art, darling!

First… double transit of the Americas

Long-distance riders don’t come much more experienced than Nick Sanders. He’s been around the world seven times, set an unofficial record for the fastest circumnavigation (taking 19 days) and this year he completed the first ever double transit of the Americas. That means he rode from Prudhoe bay in the very north of Alaska to Ushuaia, the southernmost city in the world at the tip of Tierra del Fuego, 23,440 kilometres away, then turned around and rode back again! Nick originally set out to complete the double transit in an amazing 36 days, however, after reaching Ushuaia in 21 days and 19 hours he ended up finishing the double transit, 46,880km later, in 46 days – still bloody impressive by anyone’s standards. Nick’s no stranger to riding the length of the Americas, though. He’d already ridden them seven times before, including once on a bicycle! We’ve got the full story of Nick’s incredible iron-butt journey by the man himself on page 40 of this issue. Check it out!

The naming of… the Hayabusa

I’ve never really understood how manufacturers come to decide on what their products should be called, particularly ridiculous paint colours (‘Impulsive Blue’, ‘Fuzzy Slippers’, that sort of thing). The meaning behind the name of the fastest production motorcycle in the world is quite a funny one, though. 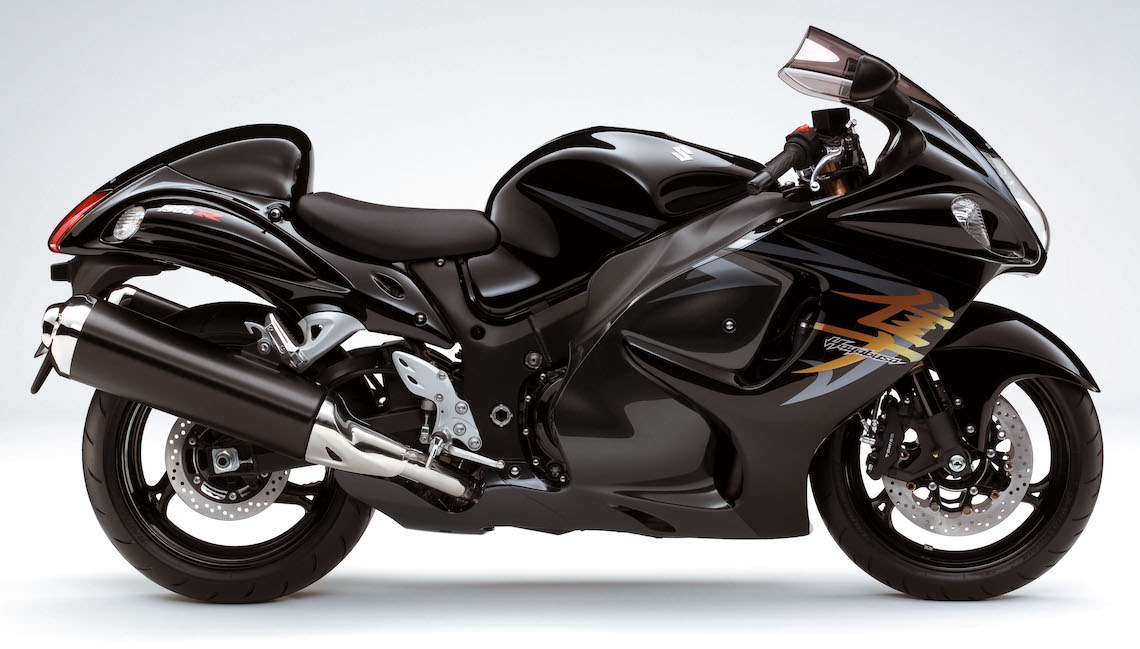 There is, however, an even cooler meaning behind the name. Before the Hayabusa became the fastest bike in production the motorcycle that held the title was the Honda CBR11000XX Super Blackbird. In the animal world, peregrine falcons, or Hayabusas, prey on blackbirds, and, like the bird, the Suzuki Hayabusa preyed on the Super Blackbird’s speed record and beat it by 10mph to steal the title of ‘fastest production motorcycle’. Take note, Trivial Pursuits fans.