Dr Mike: How to dodge the jaws of death while adventuring abroad on your bike 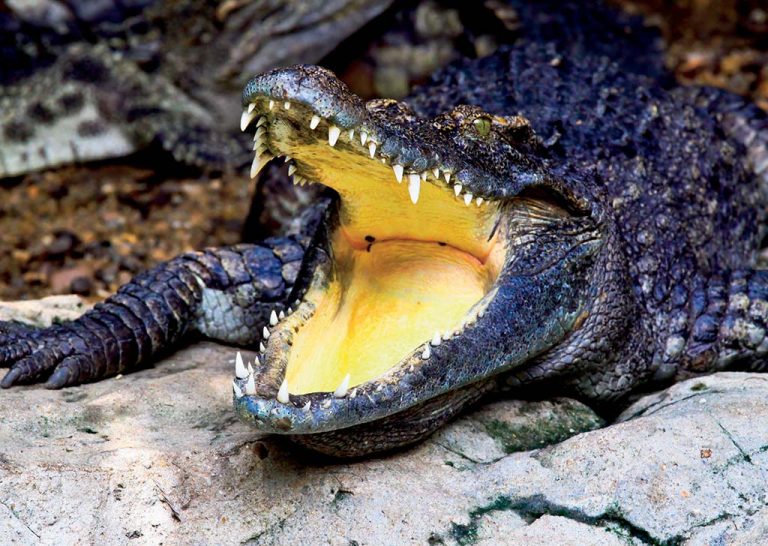 BITE THE BIG ONE!

TV’s Dr Mike Leahy has been on the sharp end of venomous fangs, crushing canines and bad-tempered big-toothed beasts aplenty. He’s got some advice, to help you dodge the jaws of death while adventuring abroad on your bike…

Most people would probably give big biting creatures like sharks, snakes and crocodiles a wide berth. Having wrestled and caught big snakes, lizards and alligators myself, I have genuine respect for people who work up-close with these animals on a regular basis. These beasts don’t kill all that many people, however, and really aren’t all that deadly as long as you are sensible.

First, let’s tackle crocs and alligators. Bigger biting creatures like these are generally predictable in their habits and fairly easy to see. Thankfully, humans as a species have relatively good eyesight; once you can see a large killer animal it’s prudent to avoid it. In most cases, if you were ever to get close enough to one of these big biters to be in any real danger, you’d stand a good chance of backing – or running – away. If confrontation is unavoidable my advice is to grab hold of the sharp end and scream for help. (This approach is no good with grizzly bears, by the way) but will work with many snakes and small crocs if you’re confident enough. Crocs and alligators kill up to 2,000 people a year worldwide, but as an adventure motorcyclist you shouldn’t cross their path too often. That said, it’s worth thinking about where you choose to wild camp in certain parts of Africa, Australia, Florida and Bristol Zoo.

Snakes on the other hand kill around 50,000 people per year. In places like Thailand or Sri Lanka they’re difficult to avoid, because there are so many of the damn things. In Africa the notorious black mamba is known for being extremely aggressive, chasing people down, producing buckets of deadly venom, and even attacking giraffes, but in most cases snakes will want to escape should they come across you.

If you’re in a country where snake encounters are likely, take a few precautions before wading off into the undergrowth for a pee. Make plenty of noise, to scare any snakes away; if you’re not worried about looking a bit of a wuss, take a long stick to probe the way ahead and keep your biking boots on as they offer superb protection from serpent fangs.

Snake bites aren’t all about life or death – it’s not that simple. Modern antivenins may save your life, but they might also bring on a life-threatening anaphylactic reaction. The damage done by the snake venom could leave you permanently disfigured or disabled, so treat snakes with respect.

Scorpions are another one to watch. Their stings hurt (I know from painful experience) but you’re unlikely to die from one. In reality they’re only responsible for around 5,000 deaths per year worldwide. Size isn’t everything in the world of scorpions. The smaller the creature or its claws, the more venomous its likely to be; small ones can hide very effectively, too. It’s always worth checking your bedding, boots, clothes and luggage before plunging a hand or foot into a warm, dark, potential scorpion resting place.

Surprisingly, spiders kill very few people each year. No one has died from a spider bite in Australia since 1979. Even before the advent of antivenins only 26 people were killed in Australia by spider bites over the preceding century. This would be small comfort, however, if a funnel-web spider were to sink its half-inch fangs into you; the bite is excruciatingly painful.

In South America it’s a different story. If you’re unlucky enough to be bitten by a Brazilian wandering ‘banana’ spider you’re quite likely to die a painful death – following an involuntary erection which could last hours or even days! For me, the spider to avoid is the brown recluse which is widespread across the adventure biking Nirvana of the south-western USA and Mexico. This spider looks like a dull brown British house spider. If it bites you it will barely hurt, but the bite site will soon turn into a wound which grows hourly, and after a few days it’s likely to be a pizza-sized circle of rotten skin. This will take ages to heal, is prone to further infection and is likely to disfigure you, so be warned; it’s not always the scariest-looking spiders that are the most dangerous.

Unexpected threats come in the shape of centipedes and caterpillars. In parts of Asia centipedes can grow to about a foot in length. They’re so meaty that some farms grow them for human consumption, but they’re notoriously aggressive and can deliver a painful and potentially deadly venomous bite. Venomous centipedes are present in much of the tropics and can hide very effectively in sand, making dunes and beaches potential ambush sites. Unlike centipedes, caterpillars won’t generally bite, but many of the urticatious (hairy) species can inject nasty venoms using their hair-like spines. This can be a very uncomfortable, and sometimes life-threatening encounter. Many of these caterpillars are very well camouflaged, so keep your eyes peeled.

Many mammals ranging from bats to dogs can carry rabies, a viral illness which is all but 100% fatal. Around 50,000 people die each year from rabies infections (about the same number that are killed by snakes). The difference is that people often survive snake bites whereas there has only been one recorded case of a person ever recovering from symptomatic rabies. You may have been vaccinated, but did the doctor tell you that the vaccine merely buys you time? It doesn’t totally protect you, and if you’re bitten by a rabid animal you will still need to seek urgent medical attention. Should you do nothing following a bite you’re likely to develop the disease whether vaccinated or not. It may take up to a year before symptoms show – depending on where you’re bitten – but once you develop symptomatic rabies, you’ll certainly die.

To avoid rabies, it’s worth finding out how dogs in each country you visit are likely to behave. In many places, the Caribbean and Africa for example, healthy dogs will run away when you stoop to pick up a stone. If one dog behaves differently to the others, avoid it. Likewise it’s foolhardy to approach any mammal that looks sick, no matter how sorry you feel for it.

Panic spreads quickly in communities where a ‘mad dog’ has been seen, so as ever when travelling chat to residents and soak up local knowledge. In places like Mongolia, Tibet and other wild parts of Europe and Asia dogs that guard livestock can be very aggressive. If you’re attacked while riding keep your cool, look well ahead, ride briskly and rely on your boots to defend you from the dog’s teeth.

There’s no point worrying or fretting about what might happen to you when travelling, but it‘s worth taking obvious precautions a matter of habit, just like taking the ignition keys out of your bike. This is particularly important when dealing with unfamiliar animals. Get into the routine of shaking out bedding, checking luggage and clothing and emptying your boots – and don’t take unnecessary risks by getting too close to potentially dangerous creatures.

How to treat a…

Immobilise the bitten limb with a splint, then firmly wrap a bandage around it. If possible and safe to do so, kill the snake that bit you, not for revenge but so it can be positively identified; then seek medical help asap. If you’re travelling with companions ask them to carry you to a vehicle or shelter; avoid walking and try to remain relaxed. Don’t try cutting the bite with a knife, sucking the venom out, or restricting the blood supply with a tourniquet.

In the case of the funnel-web or wandering spider, treat the bites as you would a snake bite. Otherwise always seek medical advice if you’re ever subject to a painful spider bite.

Seek medical help immediately. Wash the bite site thoroughly with soap and water asap. This will reduce the chances of you being infected with rabies by washing away any virus contained in the animal’s saliva. Soap kills most germs very effectively. 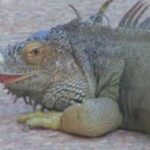 “While touring Thailand me and my better half ran into this ‘little’ fella in the museum over the River Kwai. He was about 3ft long and I’ve since been informed is a green iguana. They can bite, but their favoured form of self-defence is to whip their tails when they feel threatened – I didn’t get close enough to find out!”
ABR reader Richard Walby, via email 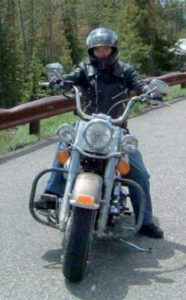 “My son David and I were touring Yellowstone park. We were caught in a torrential hail storm and night had fallen by the time we were able to get back on the road. The tarmac holds the day’s warmth and makes a comfortable spot for animals to bed down. The entire bison, wolf and elk population of Yellowstone was on the road that night! We encountered a whole pack of wolves as I came barrelling round one corner. My first thought was ‘brake!’ (which isn’t very helpful on a Harley with woodblock brakes) and then ‘I hope they stay still so I can ride around them’. They didn’t and instead scattered in all directions. Wolves are magnificent animals, though, and far more delicate-looking than I expected.”
ABR reader Paul David Neate, via email 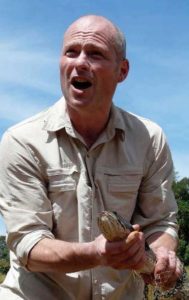 Adventure motorcyclist Mike Leahy is a virologist and TV presenter who’s passionate about foreign travel. His TV shows include Bite Me, LabRats, and Bodysnatchers. Mike likes to experiment on his own body. By deliberately infecting himself with nasty diseases, being bitten by dangerous animals, and growing parasites in his insides he hopes his first hand experience will save fellow adventure motorcyclists from the same fate.