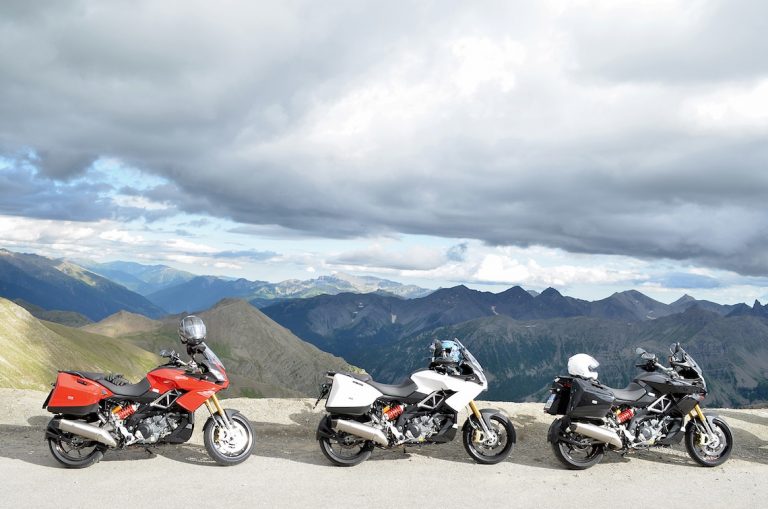 The Aprilia Caponord has been with us for a year now, but in order to make sure no one forgets it, Aprilia invited us out to France to be reacquainted with the other Italian adventure bike

It was early last year that our previous Product Tester Paul Jennison rode the new Caponord on its launch in Sardinia. In his report (ABR 16) he really liked the bike (except the front end styling), but with the weather as bad as it was at the time there wasn’t much opportunity to get to the meat of the bike’s ability. The weather was perhaps an omen of the Caponord’s success, as it’s largely been overshadowed by big-name arrivals such as the water-cooled R1200GS and the KTM 1190 Adventure, not to mention the continued success of Multistrada and Triumph Explorer.

Realising that the game was getting away from them and that they perhaps needed to do something to keep the Caponord in the limelight, Aprilia invited ABR and a host of other European magazines out to France for a two-day refresher with the Italian adventure bike that, on first impressions, doesn’t really give much reason to shout about.

Is it an adventure bike or is it a touring bike, or are those two monikers so closely aligned now that there’s really no point trying to decipher it? The 17-inch front (and rear) wheel certainly lend it a less than rugged appearance, and those integrated colour-coded panniers that come as part of the Travel Pack that all test bikes were fitted with (Travel Pack also includes centre stand, traction control and electronic suspension) hardly gave it the rufty-tufty image of adventure we’ve become accustomed to. It’s hardly much of a looker either.

The riding position is also strange at first, almost like being sat at a piano stool with your arms about to play the farthest apart octaves; low and wide, that’s what I mean.

In an age of high-level bars, this takes some getting used to and the first hour or so on the road is tentative, though with familiarity comes speed and confidence.

You begin to realise you can really work the bars in a rhythmic motion, flowing from one corner to the next, relying on counter-steer and almost pulling the outer grip towards you. Before long you’re grinding the hero blobs on the pegs and the speed you’re beginning to carry is quickening. Most of all it’s good fun, and on the tight up and down hairpin roads of the Verdon Gorge and up over the Col de la Bonette there was not another bike I’d wish to be riding.

One of the bike’s strengths in this age of towering machinery is just how low and manageable the seat height is. At 5’10” this rider could easily get both feet down, which really does take a lot of the worry out of doing low-speed manoeuvres and sharp u-turns. The fuel tank is also narrow, meaning those with a small inside leg measurement shouldn’t have too many problems either. The stock seat is also very comfortable; probably the best in its class. It’s stylish too, in the way that only the Italians could make it.

The throttle response disappoints. As with some of the other ride-by-wire systems (no cable, just sensors in the throttle body), there isn’t as much feel or regulation as you’d wish for. In ‘Sport’ mode the response is too snatchy. In ‘Touring’ it’s too delayed, feeling almost as though the clutch is slipping as you lay on the power, for it then to come in and frustrate you for being like that.

BMW has mastered this technology with the GS, whereas Suzuki with the V-Strom 1000 continues to remind us that a well set up cable system is still the most accurate and feelsome method of regulating the power.

There is also a ‘Rain’ mode, reducing power by 25bhp and delaying the response even further, though with dry roads there was no call for that on this occasion.

The screen, by touring standards, is small, and whilst adjustable still doesn’t extend enough to give protection from the elements. A touring screen would be needed for long-distance work. The panniers aren’t the Aprilia’s strongest point either. Much like those recently fitted to the V-Strom 1000, they look the part but aren’t spacious enough to make them really useable, with the locking mechanism and clasp sometimes fiddly.

Seeing other riders go by – some two up – on metal pannier equipped adventure bikes makes you realise just how much more practical that set-up is than the plastic side-opening panniers of old. Little wonder so many couples now travel on adventure bikes, especially in allowing for a decent top box as well. As far as we can see, luggage space would be a serious issue for anyone wishing to travel two-up on the Aprilia.

Conversely, the brakes impress, with there only ever need for one-finger operation even on the quickest of charges into the tight descents. The lever at the other end of the bar – the hydraulic clutch – takes more commitment, with it proving quite heavy in traffic. This isn’t helped by the bike’s tall gearing, meaning that at any pace less than a jog you’re having to work the clutch to stop the bike from stalling. This might become frustrating if used as a regular inner-city bike.

Where the tall gearing does work is out on the open road where the bike feels relaxed at pace, even in fifth. The tall first gear also aids tight hairpins, with you able to drop it down to bottom cog nice and early, using the looong gearing to really power out and gain traction before hooking up to second. On the roads around the Verdon Gorge, we barely made it out of third.

The 1,197cc liquid-cooled 90-degree v-twin engine is not the most soulful, even with the aftermarket Arrow can fitted. The bike doesn’t quite feel its 125bhp, not in the way the GS does with so much immediate wallop. The Caponord is more like the 112bhp Tenere by comparison. There’s plenty of mid-range torque between 3,000 and 4,000rpm, with the limiter set at 9,600rpm, but it never feels that willing, though it will perform if asked. In a sense, it neither excites nor disappoints; it just does its job.

For reference, the engine in the Caponord is now Aprilia’s own, following the switch from the 1000cc, 60-degree V-twin made by Rotax back when Aprilia was bought out by Piaggio and it was decided to bring engine production in house. The new engine (also used in the Dorsoduro) uses the same 106.0 x 67.8mm bore/stroke configuration as the Ducati 1198, but utilises a twin-plug ignition for better low-end response.

Unlike the Ducati 90-degree L-twin however, the cylinders are rotated backward 30 degrees in the crankcase compared to the desmo engine, allowing the engine to be more compact. The engine also uses a hybrid chain/gear cam drive similar to the 750, and is actually 2mm narrower than the 750, though slightly heavier. For the Caponord there’s also a 690-watt generator to power all manner of electrical accessories.

Engine aside, the ride quality is perhaps the Caponord’s strongest point, offering what is arguably the smoothest and most relaxing ride of any bike we’ve ridden in recent issues, especially over bumpy surfaces that would unsettle most bikes. It really is in a different league, with the only bike to run it close being a GS fitted with Dynamic ESA.

Like the BMW, as well as the sky-hook system on the Ducati Multistrada we rode last issue, the Aprilia also adjusts compression and rebound damping on the move. If you start riding harder the system changes the suspension to compensate and to make the ride firmer (or softer when you relax). The system knows you are riding aggressively by the amount of torque requested, throttle position, speed, rpm, wheel speed, and gear.

You can feel the system working as under heavy braking there is much less pitch (much like the telelever-equipped GS) than there would usually be on a bike that rides so well on the flat. Likewise, there is little rear-end squat under acceleration, with Aprilia claiming that the Sachs shock is capable of changing damping rates in as little as 10 milliseconds.

Where the Aprilia differs from the competition is that it is the only bike with automatic preload adjustment (at the rear only), meaning that the bike senses the load on the bike and sets the preload accordingly. You can also do this manually, using buttons on the instrument cluster to switch between solo rider, rider with luggage, rider with pillion, and lastly rider with pillion and luggage.

Unlike the BMW and Ducati, there is no way of changing the damping settings, from soft, to normal, to hard for example. Front suspension is continuously adjusting the damping, with this possible by means of a simple temperature-compensated pressure sensor in the left fork cap. As the fork compresses, the pressure of the air above the oil rises, and ADD interprets changes in pressure as fork movement.

The conclusion of all this suspension technology is a bike that you can leave in the auto setting and enjoy the comfort on the open flowing road, along with the control and sportiness when needed in the corners. It is quite possibly the best system of its kind, and certainly adds to the bike’s overall impression.

Did I like the bike? Yes. Why? Because it’s easier to ride briskly, it’s involving, it’s comfortable and there’s something about the character of it; it’s not mainstream, it’s not the obvious choice. In comparison to a Ducati, it doesn’t have anywhere near the explosive power, but it does have far more refinement and a lot less in your face performance.

This is a bike you could ride a long way on, and not necessarily at a fast pace. It is more touring focused, rather than sports-focused, and we feel the bike all the better for it as it makes it easier to live with, and less intimidating to ride.

What you do feel with the Caponord is that the bike is as good as they could have made it. Some of the other bikes you feel they could have done more; there was still potential left in the basic package. With the Caponord, especially with regards the electronic suspension, you can sense the company’s ambition, with the biggest shame being that it’ll never be a serious challenger to the likes of GS or Explorer.

The bike just doesn’t have the dealership network or the kudos to do so. This is a big shame, as a rider’s bike; one that is all about how the bike works for the rider and not for the crowd looking on, the Caponord is an accomplished piece of kit. Dare to be different and try one.