A Day in Iraq 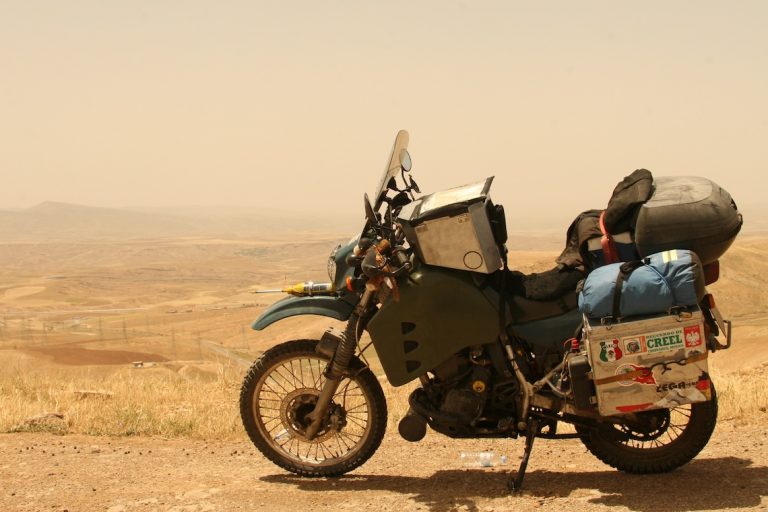 In an exert from Graham Field’s new book Ureka, we hear first hand what travelling through that part of the world was like, before the recent troubles began…

A few days ago I mislaid the pen I write my diary with, it’s not a massive deal but I do like the entries to be consistent in their colour and legibility. This morning I found it in my sandal bag. I wasn’t inconsolable over the loss, none the less the day starts with a good omen and I think you need that when you are about to head into Mosul, the city of certain death.

I’m ready to head the 80kms into the place of no return. These are not simply the scaremongering words of the world couch traveller, retelling stories of experiences they have never had. These are sincere warnings from every Kurd I have mentioned the subject to. You go there to die, a one way journey, certain death, crazy Arabs, kidnappings, car bombs, shootings, unstable. I have considered all of this and I think alone, unannounced, that I will pass through the 20kms of Iraq and back into Kurdistan quicker than you can say ‘grab the hippy’. 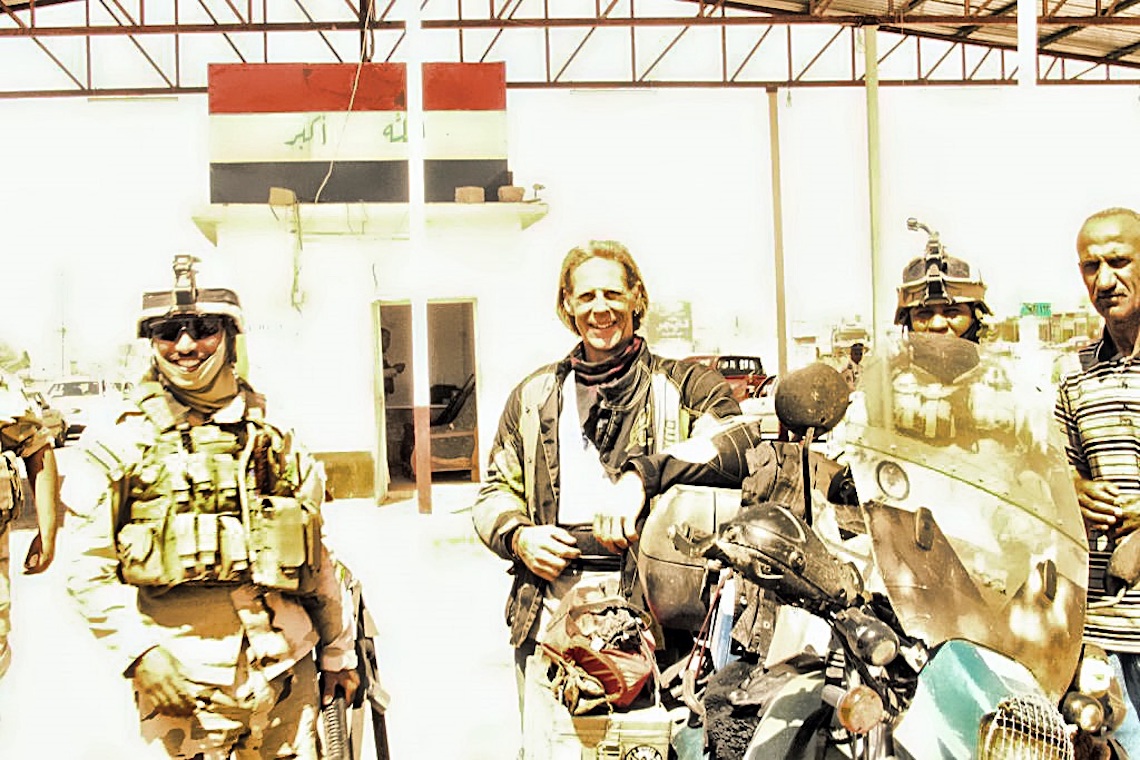 Erbil has good signposts and wide streets, the ancient city’s infrastructure seems to have kept up with the increase in the population. I can clearly see the way to Baghdad signposted and go in the other direction. Once I’m on the main northbound road, I empty the majority of the contents of my wallet at a petrol station; there was enough dinar to fill my tank and water bottle. It’s hot of course, it’s always hot. Every day has been hot regardless of my altitude, the time of day, shade or cloud cover, it’s just hot and that all there is to it.

The road is hazy as is the horizon, all around is burnt, bleached, brown, overexposed, dusty and barely occupied.

There is the occasional grey concrete and steel structure, dilapidated trucks and tyres strewn and stacked, discarded and collected. A sudden dust storm throws a barrier of brown across my path with tumbling plastic bottles and whirling paper. I flip down the visor and hold my breath. The wind brings no relief from the heat; it just concentrates it.

I come to a bridge, would this be the river separating Kurdistan from Iraq? There is a police check point on both sides but they don’t seem that concerned with me. I see a sign to Duhok, an alternative route if I choose to take it, which I don’t. I pass old trucks pumping out black clouds of exhaust, kids rummage through piles of rubbish. Red and white masts break the flat horizon along with a single plume of vertical smoke; I thought it might be a car fire, but it’s just burning tyres. 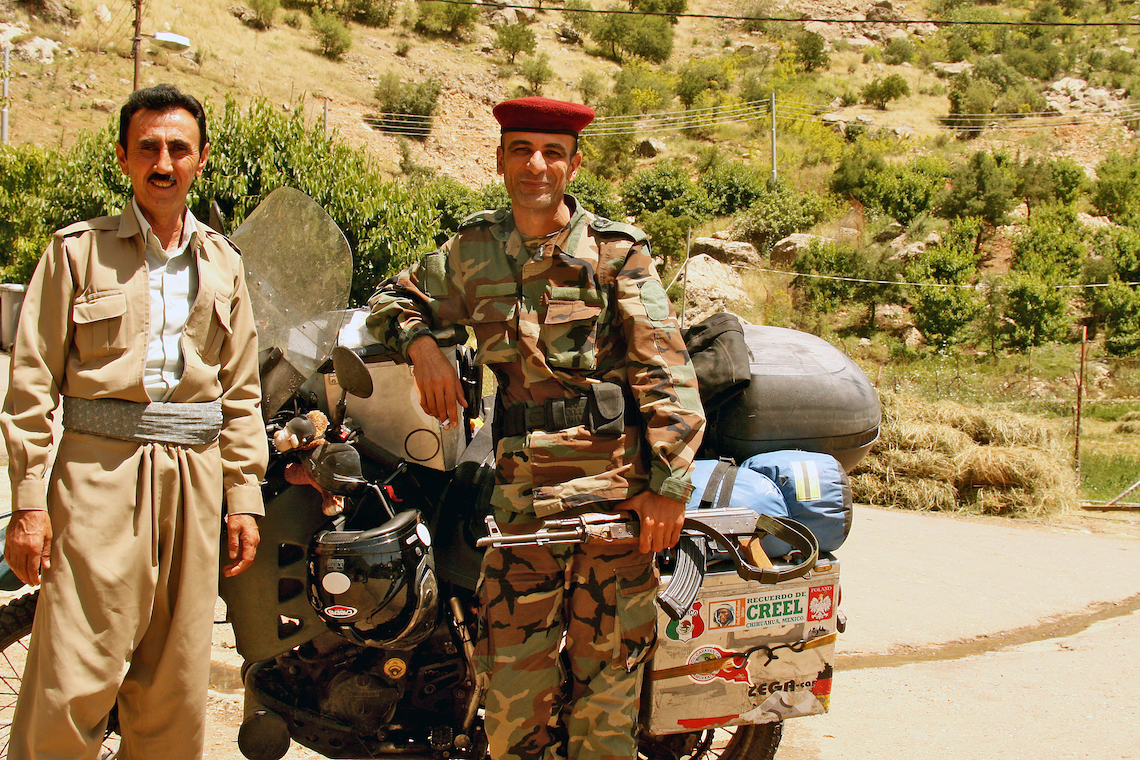 I stop to put on my money-belt for the first time this trip. Annoyingly, along with the back support that I always wear, this pressure is not helping an already grumbling and uncomfortable tummy. I’m not sure if it was that dodgy kebab last night or the angst of today. Either way I really don’t want to have to make an emergency stop on the side of this desolate road. I am now 27kms from Mosul. I must be in pure Iraqi territory now. I must have left safe Kurdistan behind me. Another 27kms north of Mosul and I will be back in the safety of semi-autonomous Kurdistan. Kurdistan is both south and north of me, its squiggly boundaries appear to overlap Turkey and Syria. However, for now I think it has left me in a similar terrain but with another name because its borders skirt Mosul like a ring road.

Once again there is a junction, the majority of traffic slips off to the right and joins a queue to the check point. I continue straight ahead. The road is empty now. Where are the inevitable trucks that cross every dire road in the world supplying the unfortunate inhabitants? All that’s left on the road is me and a 650cc single cylinder engine sweltering between my legs. It is complaining about the cheap oil that is breaking down in the heat, a heat that keeps the radiator roasting as the boiling fluid is pumped around it. Ten kilometres to go now and another checkpoint. It’s army now and they are more protected than any motorcyclist stupid enough to pass. The soldier looks at me with his big brown eyes under the shade of his helmet.

‘Mosul’ I say and point. ‘Yes’ his eyes say, ‘I know it’s that way, what the hell are you going there for?’ But his authority bows to my stupidity and he lets me continue to my imminent death. In less than a mile there is another check point, a big one this time. Armoured cars, watchtowers, tanks, sand bags, barriers and the soldiers; soldiers? They are solid individual killing machines, covered in weaponry and bullet-proofed. My god they could kill a terminator with that lot; automatic weapons, belts of magazines, hand cuffs, mace and a big knife at the front. Masks up to their noses and helmet down to their eyes, with some kind of safety goggle perched on top which probably has 3D, X-ray, see in the dark, laser beam projecting and sight-correcting qualities. These men are as secure and bullet-proof as any walking human can be. I thought I was hot in my bike gear. They must be sweltering.

I choose to pull down my bandana, lift up my chin guard and use my biggest smile; they bring on their highest commander. He is decorated but not defended by armour, just, girth, knowledge, authority, medals and a very slight grasp of the English language. He asks where I’m going. I figure I’m near Mosul now, so I give the destination of Turkey. 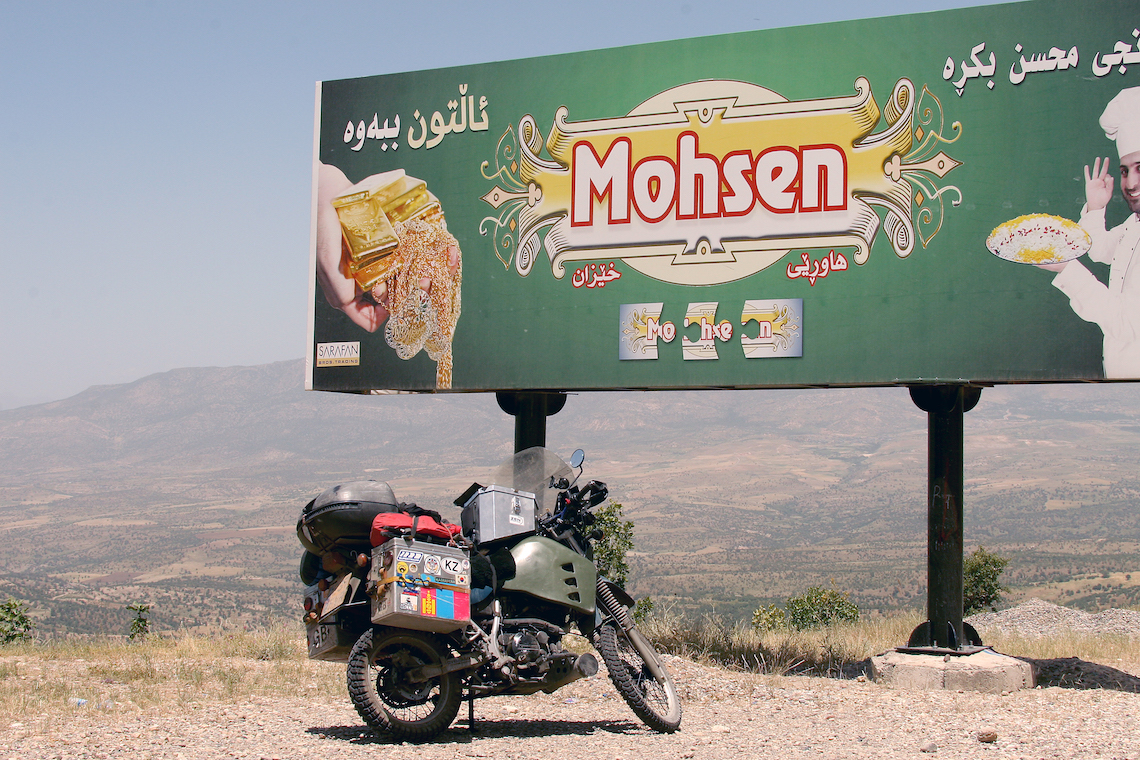 “I can go via Mosul?” He plays a low card but it beats mine. “Where is your visa?”

“No this is for Kurdistan; you need a proper visa” he says leafing through my passport “like these ones, but for Iraq.” To be honest I’m ready to turn round now anyway, I came, I saw and I realise I have seriously underestimated the situation.

“Here is great danger, bombing and kidnaps. It is very dangerous. You cannot proceed; you need to go back 10kms and turn left, continue in that direction.”

My appearance here is a break from the fear of every other passing vehicle. It has brought a host of tooled-up military, all smiling, all friendly and with their questions in their pigeon English. They all are shaking their heads at my being here. One of the man-machines indicated I must be hot in my bike jacket, I point at his regalia, ‘looked in the mirror this morning mate?’ but it’s all in fun. I’m not here to defy or to be obtuse; I just wanted to try to see. This is a war zone and I’m far too insignificant to be protected, but unique enough to be a victim of opportunity. Anyway I don’t even have the right paperwork. But since I came this far can I have a photo?

The high ranking man offers to take the picture. I stand by my bike with three of the terminator terminators. I feel safe with them, they are so friendly and smiley, and have so many weapons on them. When I put my arm round one I can’t help but touch a weapon of destruction. After the big man has had enough of my souvenir day, I take the camera and take a few more shots. Luck well and truly pushed, I confirm the new route and say goodbye to these very honourable men. But not before a phone is produced and my photo is also taken. 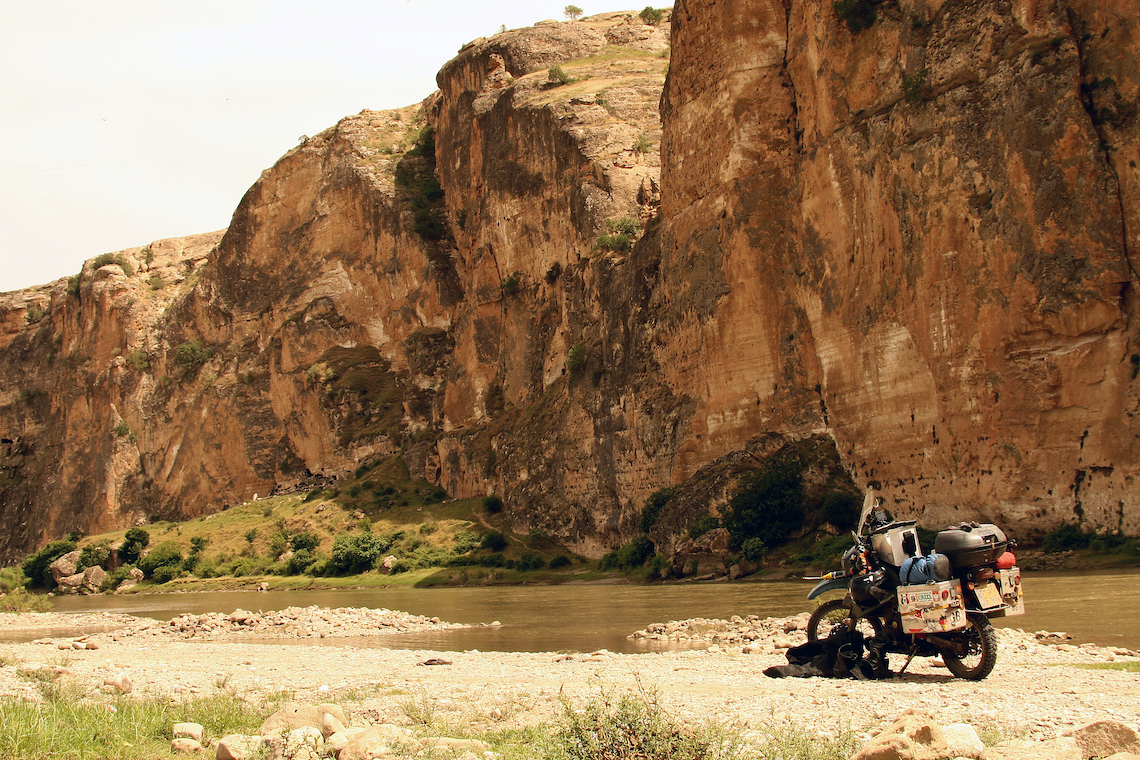 There is not the faintest hint of disappointment as I leave this checkpoint.

It was my mistake, this is a U-turn I’m happy to make, I had to try, had to see for myself. I’m still intrigued as to the street life of the city behind the barricades; it can’t be all burnings, bombings and badness. There has to be the overlaying appearance of normality, shops open, and people passing. It’s not going to be a burning pit of hell, but I’m sure it can turn into one pretty damn quick.

I take the road I was told to but there are no signposts now and I take a guess at a junction. An unshaved man in jeans and a t-shirt, with a Kalashnikov and a radio comes out and stops me, he is the scariest figure I have seen all day. He turns me round, I go back to the junction, more men on radios point me down another road. As I ride down it another armed man walks out from a hedge and stops me.

‘’Good’’ he says and points in the

direction I should go, as I’m about to pull away he adds ‘’Welcome to Iraq.’’ 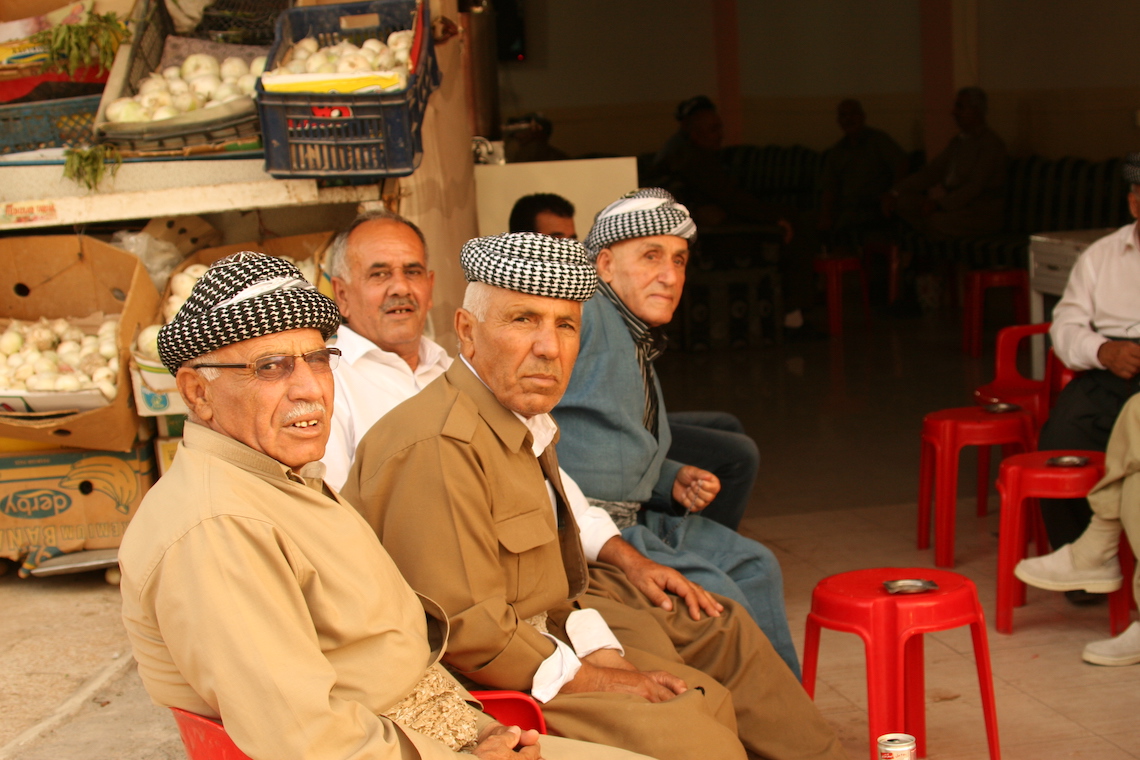 The words make me shudder and it has nothing to do with selecting the wrong gear. Now I know I’m on the right track, the Kurdistan flag appears. It makes me feel safe, and slowly I leave signs for Baghdad and Iraqi flags behind, replaced with sunflower fields, the most peaceful, pretty and pleasurable sight today.