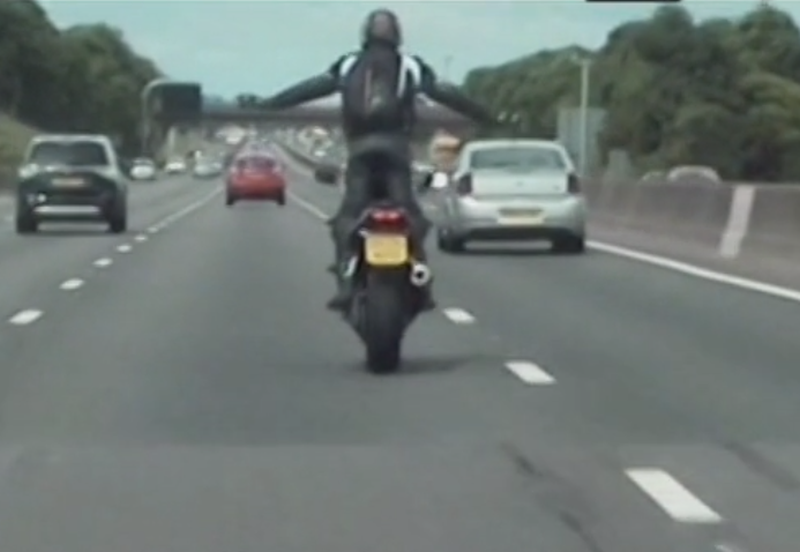 On the ABR Forum this week: rider jailed for dangerous behaviour

As usual, the ABR Forum has been brimming with action this week. If you’re not a member, you’re missing out on witty banter, useful knowledge, helpful information and interesting debates. This week, a conversation that has caught my eye is regarding a video that has recently been published in the news.

If you haven’t already seen it, the video was taken by officers in an unmarked police vehicle who filmed a motorcyclist riding dangerously at speeds exceeding 100mph on the M6 at 2pm in the afternoon. The officers filmed the rider on his Yamaha R6 for around 16 minutes before pulling him over and arresting him.

The 27-year-old rider, Pawel Zietowski, was filmed performing wheelies, taking selfies, standing while steering with his thighs, and rummaging through his rucksack while riding at dangerous speeds in the outside lanes of the motorway.

The rider has been given a 28-month driving ban and has been sentenced to eight months in prison. Now, in the thread (aptly titled ‘what a plonker’) on the ABR forum, there has been some contrasting opinions on the sentence. The thread was started by ABR Forum user Oop North John, he shared a link to the video and, in jest, commented: “I wonder if the police gave a copy to him?”

Dibbs replied: “Hahahahah loved the bit about rummaging through his backpack! As if doing a wheelie whilst taking a selfie isn’t hard enough! But, I’m not condoning it.”

Ollydog replied: “Why was he not stopped before 16 minutes? They would have had enough evidence after 30 seconds.”

RandG disagreed and commented: “Absolutely fecking outrageous, I’m spitting blood here with that, disgusted is not the word for it… I’m absolutely raging. Jailed for that!!”

Tempesc replied to RandG and said: “Seems fair enough to me. My friend’s daughter was killed by an idiot driver – it’s not a computer game without real life consequences.”

So, what’s your verdict on the motorcyclist’s driving ban and prison sentence, do you agree with his punishment? We’d love to know your thoughts, let us know in the comments section below.

You can also reply to the thread by heading over to the ABR Forum.