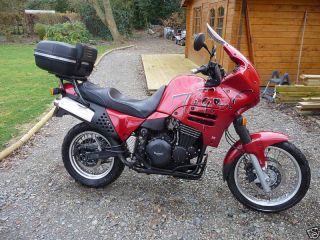 Well, I threw in the towel over the weekend and went intravenous with the intoxicating elixir that goes under the name of multiple bike syndrome. The way I see it, there’s just no point in fighting something that’s far too big and powerful to resist. Best to just go with the flow and do something productive such as throwing caution to the wind. Yes, that’s code for; I’ve gone and bought a Triumph Tiger. But not any old Tiger, my hard earned left my sweaty palm in exchange for a ‘Steamer’.

A ‘steamer’ is the affectionate name given to the old 885cc Hinckley triples as opposed to the ‘Girlie’ moniker of the 955cc and the ‘Roadie’ tag for the current 1050cc. There doesn’t appear to be a consensus of opinion as to where or when the nickname originated, but those who should know about these things reckon that it’s probably to do with the Tiger being water cooled where as the old Meriden lumps were air cooled.

I’ll post up a report of my first ride back from Norfolk to Stratford upon Avon a little later because right now I’m spending all my time walking around the bike and admiring mudguards, engine casings etc. and just generally oohing and aarrhing in awe. And that’s how it should be after buying a bike. When I look at the Tiger I see an oasis in the distance, when I throw a leg over I feel the heat of a Saharan sun and when I rode to work this morning all the signs were pointing to Timbuktu.

Let’s face it, a two wheeled purchase is nothing if not made through a pink haze of romance and dreams. If there’s a hint of ‘practicality’ in my decision, then it’s only apparent when I’m  justifying the spend on the ‘Steamer’ to those who, quite frankly, have a lot more sense than me.

Give me romance and dreams over practicality any day. Oh, and did I mention I had to call on the AA to help me get home with my new beloved Tiger – joining a breakdown association is as practical as I ever want to be.