Eight of the best coastal roads for bikers in the UK 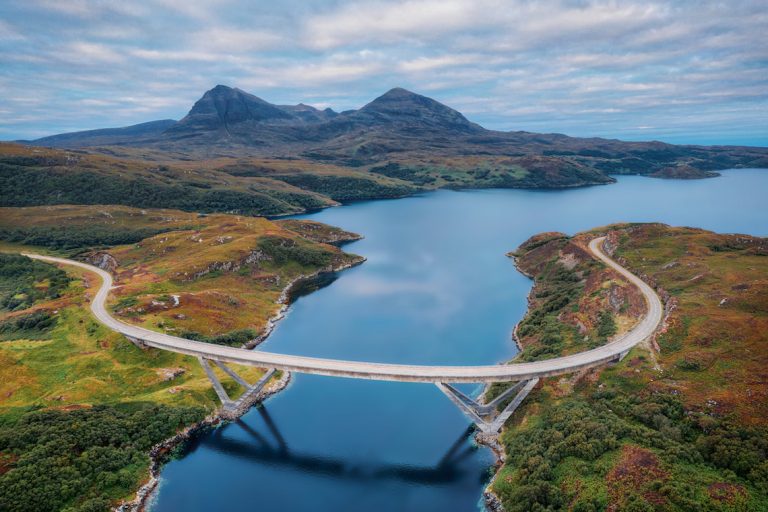 Some of the world’s most iconic motorcycling routes are found where the land meets the sea. As an island nation, we have our fair share of stunning UK coastal roads to explore too.

With this in mind, we highlight eight sensational rides along the UK coastline, in association with TomTom, for you to enjoy on your next weekend ride out.

Discover eight UK coastal roads that you need to ride

If you like your motorcycle touring to be remote and wild, there’s no better place to ride UK coastal roads than North West Scotland. The region is awash with sensational roads, but if we could only ride one, the coast-hugging stretch of tarmac between Applecross and Durness would be our recommendation.

The sense of isolation is tangible as you ride through a majestic landscape that rivals anywhere in the world for barren splendour. The road surface is generally good as you snake your way along narrow lanes that hug the coast, providing sweeping views of the sea from the saddle.

The route also twists its way around a series of lochs and travels inland where you’ll find yourself gorging on views of snow-capped mountains. This really is as wild as riding in the UK gets.

And, the best part is, if you’re travelling in a northerly direction, you’ll get to ride one of the UK’s best mountain roads, Bealach Na Bà, before you even reach the start at Applecross.

The entire coast of Cornwall is well worth exploring, but it’s the stretch from Padstow to Land’s End that I return to time and again for its sheer riding pleasure and stunning views.

Leaving the quaint fishing port of Padstow behind, you’ll ride along narrow country lanes that periodically plunge down valley sides to picturesque sandy bays, before twisting their way back up again. Then, when the road opens up, you’ll enjoy panoramic views of the Atlantic Ocean as you ride along cliff tops, watching the coastline unfurl dramatically into the distance.

After passing the lively tourist resorts of Newquay, and Perranporth, and the ominously named Hell’s Mouth, you’ll find yourself in St Ives where you join the B3306. This incredible road snakes its way around the far south western tip of Cornwall, offering vast views of sparkling seas stretching to the horizon. This is a twisting UK coastal road at its best.

Finally, jump onto the A30 and ride to the end of the road at Land’s End.

The Jurassic Coast stretches for 95 miles along the south coast of England, from Exmouth to Old Harry’s Rocks near Swanage, but for motorcyclists in search of sweeping sea views, the best riding is found between West Bay and Portland Bill, near Weymouth.

This 25-mile length of coastline is part of the Jurassic Coast UNESCO World Heritage Site thanks to its wealth of rocks and fossils, which provide an insight into around 200 million years of history, including remnants of baking deserts, tropical seas, swamps, and forests.

You’ll be riding in the footsteps of dinosaurs as you travel along a ribbon of twisting tarmac that rises and falls with the undulations of the cliff tops, offering stunning views across the English Channel.

The grandeur of the riding tails off as you cruise through the Isle of Portland, but it’s certainly worth making it all the way to the famous red and white lighthouse at Portland Bill, which has been shining since 1906.

The rather flat county of Norfolk may not boast the mountain passes of Wales and Scotland or the rugged coastline of Cornwall, but for those willing to make the journey to East Anglia, there’s plenty of enjoyable riding to be had.

In particular, the 54-mile stretch of the A149 from Kings Lynn to Cromer on the Norfolk coast is a gem of a ride. The port of King’s Lynn is a fascinating destination in its own right, with its medieval merchants’ houses, cobbled streets, and wealth of maritime history.

From here, we join the A149 and ride north towards the coast at the sleepy seaside town of Hunstanton, which is a popular meeting spot for bikers. Our route then takes us along narrow country roads through farmland and small villages, with views of the coast becoming more regular as you ride towards Cromer.

The pace of life is slow in this part of the world, and I’d recommend yours be the same, giving you the chance to turn off the A149 and explore some of the beautiful beaches on the Norfolk coast.

Most people looking to cross the Irish Sea for a coastal ride will make a  beeline for Ireland’s Wild Atlantic Way, but for those in the know, the Antrim Coast in Northern Ireland matches its world-famous counterpart for biking pleasures.

Sometimes known as the Causeway Coastal Route, this 130-mile ride can easily be travelled in a day, but there are so many sights to explore along the way, you might want to split it into two. As far as the quality of riding goes, it’s up there with the best coastal routes in the UK, with mile-upon-mile of sweeping country lanes providing panoramic views of the North Channel.

Along the way you can visit the world’s oldest distillery at Bushmills, gasp in awe at the 40,000 basalt columns that make up the geological marvel that is the Giant’s Causeway, and marvel at the sweeping views of Murlough Bay.

But it’s the riding that’s the real star of the show, and I assure you, it won’t disappoint.

While the focus of this feature is on UK coastal roads, it’s hard to pass up an opportunity to ride on the majestic North York Moors, and this route does just that. Starting in Scarborough, Britain’s first seaside resort, we ride north to the A171.

This popular biking road takes us up onto the moors along fast, flowing tarmac, while giving you glimpses of the North Sea to the east.

At the small village of Cloughton we turn off and take minor roads that snake their way around tight bends, and rise and fall like a rollercoaster. We then rejoin the A171 before diverting to Robin Hood’s Bay, a picturesque fishing village with narrow cobbled streets, quaint fisherman’s cottages, and stunning coastal views.

We then follow B-roads all the way to the seaside resort of Whitby (pictured), a town that helped inspire Bram Stoker’s novel Dracula, and a popular tourist destination for fans of Gothic literature. The local fish and chips are damn good too.

When new bike launches are held in the UK, more often than not ABR will get invited Wales thanks to the country’s combination of superb roads and a majestic landscapes. And while us bikers usually flock to the mountainous terrain of Snowdonia or the Brecon Beacons, there’s plenty of superb riding to be had on the coast too.

This 70-mile route from the bustling seaside town of Aberystwyth all the way to Harlech is a joy to ride, providing plenty of thrills and scenic views of Cardigan Bay along the way. There’s a scintillating mix of narrow country lanes, flowing A-roads, and stunning cliff hugging tarmac that take you right to the water’s edge.

This route finishes in Harlech, a small town that boasts a pristine beach and a castle that inspired the famous Men of Harlech song, inspired by the bravery of Welsh fighters defending the town’s castle. It’s also an opportune spot to turn inland and explore the mountainous landscape of Snowdonia National Park.

The entire north coast of Scotland is a mecca for bikers, and if you have the time, I’d recommend riding it all by following the popular NC500 route. However, if you don’t have the time to do this, or you also want to explore the magnificent roads found inland, I’d recommend making time for the stretch of road that runs between Wick and Brora.

This 60-mile section of the A99 and A9 is pure coastal riding heaven. There are sweeping, fast-flowing bends, and plenty of tight turns to enjoy as your tyres gorge on the grip provided by the silky-smooth road surface. All the while you’re accompanied by stunning views of the North Sea.

It’s the type of road that allows you to get into a riding rhythm as you counter steer through meandering turns while marvelling at the remote coastal landscape of North East Scotland.

After Brora, the quality of the riding dissipates as you near Inverness, beyond which the A9 turns into a dual carriageway populated with plenty of speed cameras.